Redbooth, one of the seven companies featured in the Innovation Showcase at Enterprise Connect 2015 in March, has released the next iteration of its cloud-based collaboration and communications platform -- landing itself squarely in the "workstream" category.

You may recall that regular No Jitter contributors Dave Michels, president of Verge1 Consulting, and Zeus Kerravala, principal analyst with ZK Research, introduced the idea of workstream collaboration and communications (WCC) in a couple of articles last month:

In introducing the idea of WCC apps, Michels wrote:

While some insist WCC is merely a twist on UC, we believe these applications are much more than that. At best we could consider them an evolution from UC, but we find many reasons to suggest they represent a whole new category with several distinctions.

Redbooth CEO Dan Schoenbaum picked up on that theme in a press briefing yesterday. "This isn't just a new set of features. ... This is the first product in a SaaS environment that combines real-time communications for teams with the ability to work, and manage your work, together in a collaborative workspace," he said.

With this release, Redbooth has freshened up the user interface's look and feel, shown below; enriched the functionality within chat windows; and added Microsoft SharePoint Online and OneDrive for Business integrations to a list that includes Box, Evernote, Google Drive, and many others. As I discovered during a product demo, within a chat window team members are able to do things such as: 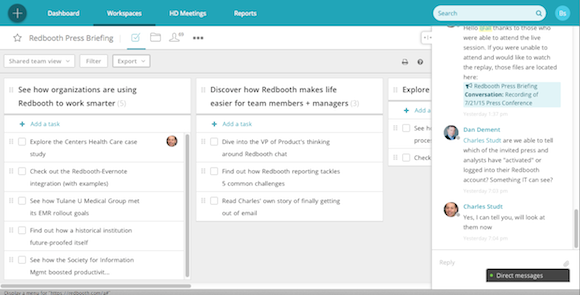 In addition, from within a Redbooth workspace users can schedule or launch video conferences in real time and get project analytics from report dashboards.

Redbooth is already in use by some 900,000 individuals within about 500,000 teams at roughly 6,000 enterprises, Schoenbaum said. And what the company hears from these customers is that "we're really freeing them from the time suck of email -- the inability to find out what you need to do, how to go about it, and how to get it done," he added.

That makes Redbooth a productivity play, with some customers reporting that they have reduced email by as much as 50%, Schoenbaum said.

And, as one customer said in a prepared statement, it also makes Redbooth an engine for agility -- without having to spend so much of their day rooting around in email, users can get tasks done more quickly.

"Before Redbooth, we saw way too many tasks fall through the cracks due to email's inherent shortcomings," said Joshua Moxon, marketing director for specialty coffee equipment supplier Prima Coffee Equipment. "Now we can quickly see who is responsible for what and ensure deadlines are being met, the importance of which cannot be overstated in a highly customer service-focused industry such as ours."

And, of course, Redbooth is an enabler of real-time communications and collaboration, or should I say, "WCC."

The latest version of Redbooth is available immediately, served up as a secure cloud-based SaaS offering or hosted in a private cloud. SaaS pricing varies by number of users, ranging from $5 to $15 per user monthly.