Multiple factors have converged to drive adoption while also shifting the revenue opportunity.

Video collaboration is booming in the enterprise -- at long last. Fully appreciating what that means takes understanding where we've come from and what the market looks like presently.

Because of the complexity behind real-time audio and video compression, in its early days video conferencing required expensive, hard-to-program, hard-to-maintain "heavy iron." Customers could only cost-justify deployments for shared conference rooms. The technology was also complex, leaving ample room for systems integrators and channel partners to provide added value via a variety of professional and support services.

Those who remember the early years will recognize supplier names like BT, CLI, Hitachi, Intel, Panasonic, PictureTel, Sony, VTEL, and Zydacron. But by the turn of the 21st century, with never-ending development costs and limited market penetration, the vendor community was limited, essentially dominated by the likes of Cisco, Polycom (now part of Plantronics), Radvision (acquired by Avaya in 2012), and Tandberg (acquired by Cisco in 2010).

The big story here is the increasing power of the Intel X86 architecture largely due to instruction set improvements, support for multithreading, and the arrival of multicore processors, among other advances. Beginning a decade ago, the X86 solution could drive high-definition endpoints and transcoding CPUs with performance that finally met customer expectations. Hence, we now have what we deem software endpoints, an industry term describing solutions that run on X86 devices rather than on hardware-based devices relying on digital signal processors (DSPs). (All software, of course, needs hardware.)

The software endpoint, in turn, opened a huge market opportunity for audio and video peripherals to attach to everyday PCs. We also have software multipoint control units (MCUs), deployable in the cloud running on industry-standard servers and capable of powering video conference-as-a-service (VCaaS) providers. Lastly, the X86 has made possible the shift from video conferencing as a stand-alone application to video conferencing as an add-on feature to applications like Cisco Webex, Microsoft Skype for Business, and a host of UCaaS solutions from 8x8, RingCentral, Vonage, and dozens more. How much these add-on features contribute to the size of the video conferencing market is a debatable point.

Video conferencing endpoints today fall into two broad categories: group and personal. Group systems are intended for shared meeting spaces (conference rooms of varying sizes); personal systems (based on computers, smart phones, tablets) are used by individuals in offices, cubicles, hotspots, or coffee houses, etc. The endpoint device itself may be an appliance dedicated to the visual communications function or a general-purpose system with either native (embedded camera, microphone, speakers) or add-on audio/video capabilities. 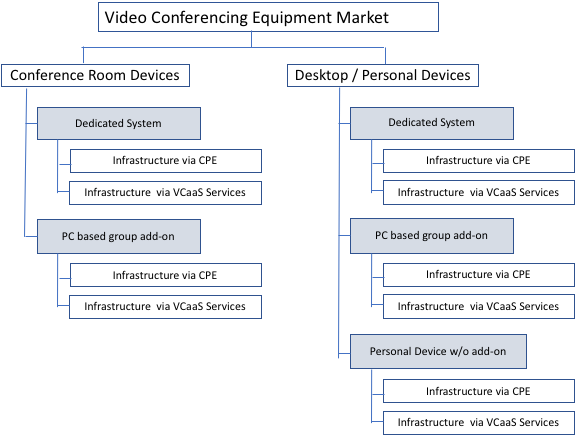 How Big Is the Video Conferencing Market?

This is a common question asked of an analyst firm. In days of old, it was relatively easy to size the video conferencing market by collecting data from a small number of endpoint and infrastructure equipment vendors and a few service providers. The number of units shipped each quarter was small (less than 35,000) and the average selling price was high, so records were accurate.

Today, the situation is quite different. Enterprises with dozens or scores of group systems deployed in meeting rooms have thousands or tens of thousands of individuals using their personal devices for visual communications. Some of these users have purchased audio/video add-on devices, but many have not. Many users subscribe to a free VCaaS service; many others to a non-free service, and increasingly, more workers and consumers are using more than one service. In my own case, I have clients for more than four VCaaS providers on my laptop and smartphone. We have surveyed users who make two video calls a month while others report participating in four to six per day. Several VCaaS providers report revenue growth rates in excess of 100% and subscriber (user) growth rates that are even higher, but the correlation with overall market growth is far from clear.