Mobile: Google Gets It, Samsung Not So Much

A couple of mobile tidbits caught my attention this week. The first was Google's formalization of its "Mobile-Friendly" labeling and scoring, and the other -- not unrelated -- item was Samsung's six-page, color Wall Street Journal ad featuring beautiful pictures of the new Galaxy S6 Edge Smartphone.

First, let's look at the Google strategy, which is twofold. As of April 21, Google is adding the Mobile-Friendly label to search results for websites that meet specific criteria important for mobile devices. In addition, it is improving the score for those sites on Google searches initiated from mobile devices.

Passing Mobile Muster
In a fairly extensive spread on its developer site, Google lays out its program for improving mobile search and highlights the benefit for those sites that get on board. The company provides guidelines for making sites work better for mobile users, who Google sees as a growing source for its searches. Guidelines for Mobile-Friendly sites include: 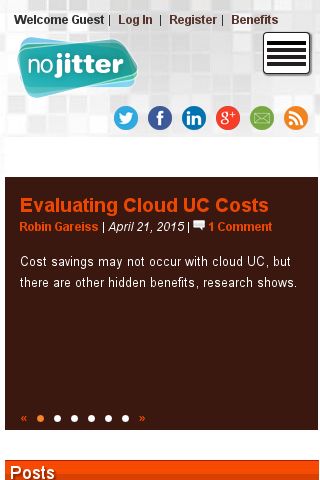 As one who is challenged by using my iPhone with one hand while pulling my wheelie bag through an airport with the other, I find all of this is spot on. Google even provides a tool that lets you enter your Web address to receive an analysis of your site against the Mobile-Friendly criteria. Surprisingly, even my rather lame site passed muster, and No Jitter did as well.

What really impresses me is that Google is using its weight to improve the mobile search experience overall. It's providing real incentive for Web operators to get on board since not only is it labeling the sites Mobile-Friendly, but also boosting the scores of such sites. Anybody who's accessing a site from a mobile device will benefit from Google's push.

Missed Enterprise Opportunity
Samsung is another matter. As the largest producer of Android devices worldwide, Samsung has a vested interest in growing the mobile operating system's adoption in the enterprise, where it hasn't gotten nearly as much traction as it has in the consumer market.

Initially the problem for the enterprise was that Android lacked core security capabilities found in Apple iOS and BlackBerry devices. Therefore, IT managers who had any hint of what was going on in mobility banned them outright.

Samsung was key in developing the required enterprise security measures, first in the Samsung For Enterprise, or SAFE, program and then with its Knox mobile security suite. Google has incorporated some of the Knox features, including the secure container, in the Android for Work package in the most recent Android Lollipop release.

So now all but the most security-conscious organizations should consider Android ready for the enterprise. But we still don't see that significant of an uptake for Android devices with enterprise users, 70% to 75% of whom favor Apple's iOS. That seems to say that something other than security is standing in Android's way. 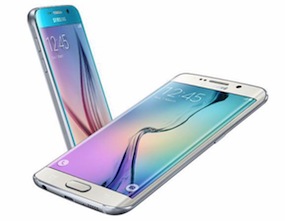 I would venture to say that that "something" is user experience (UX), and from a look at its marketing, Samsung doesn't seem to get it. The WSJ spread features lovely color photos of the Galaxy S6 Edge, introduced April 10. The Galaxy S6 Edge features a glass screen that wraps around the sides of the device and a metal case rather than the unattractive plastic one Samsung slapped on the not-so-successful Galaxy S5 launched last April.

Samsung seems to be hung up on the hardware rather than the UX. Sure the feel of the device in your hand is an element in the UX, but Apple has consistently trumped the Android camp on UX. While the pictures are nice, the ad touted "3.6 times more pixels than the iPhone 6" and "a camera with 2x the resolution of the iPhone 6" -- didn't it know this would be appearing in the WSJ?

Sure, the hardware is great, but where does that get you if the overall experience is lacking? However, hardware is also "easy" comparatively speaking, which says that unless Samsung can up its game in software and UX, the market probably has little to fear from Android or the company's own Tizen operating system used both in wearables and recently in smartphones.

Big Picture
On the macro level, anything dealing with Google today must be viewed in the context of the European Commission's charge that the company has abused its dominant position in the search business. Given the ease with which users can switch search engines, it's hard to see how EU commissioners can get the charges against Google to stick (of course, Microsoft survived a similar attack a decade back for a payment of $794 million). However, increasingly it appears the EU commissioners are more interested in slowing down Silicon Valley in hopes of giving EU-based tech firms a better shot at the search market -- too bad that strategy doesn't work.

In the meantime, Samsung's challenges might be even more difficult to overcome. We live in a software world, and Samsung is looking more and more like a hardware-focused company. Android has the numbers, but Apple is reaping the profits in the modern mobile space.

Hardware is a commodity, so unless companies like Samsung can get their act together in software, Apple will continue to dominate the high end of the market -- the part where the profit is.