Messaging Wins on TV and at Work

Television shows set in the future can often grant us insights about the present. Today’s Sci-Fi shows are an illustration of just how important short, text-based communications like SMS, IM, and mobile push notifications are - particularly for businesses.

Television shows set in the future can often grant us insights about the present. Today’s Sci-Fi shows are an illustration of just how important short, text-based communications like SMS, IM, and mobile push notifications are - particularly for businesses.

This fall I've been enjoying CBS's new show Extant. The implications for enterprise communications have continually surfaced throughout the season. Extant is set in the future and features astronauts, aliens, and androids, along with a healthy dose of everyday high-tech gadgetry. The v-chron is one of the show's highlighted technologies and is basically a video communications service. If there is a scene with two actors talking to each other, it's just as likely to occur over a v-chron as is for them to be in the same room. Although video communications are featured frequently, there is one scene that stands out to me as underscoring the value of short, text-based comms.

In episode 3, Molly, Halle Berry's character, has just been tricked into getting into a car with Sparks, the ominous antagonist. The danger is palpable, and a nail-biting tension arises as Molly's naively serene demeanor is contrasted against her impending doom. As an audience member, you do not want her in that car. Fortunately, Molly's friend Sam is clued in to the truth and ready to warn her. But which mode of communication can she use that will also fit the scene? Given the proximity of the characters in the car, a voice call doesn't work. Video would be even worse. In a stint of clever writing, Molly gets a text message that she sees, but the driver doesn't. This radically flips the tension as now Molly is enlightened and Sparks is ignorant, while I'm on the edge of my seat waiting to see what'll happen next. It's all because of a humble text message. 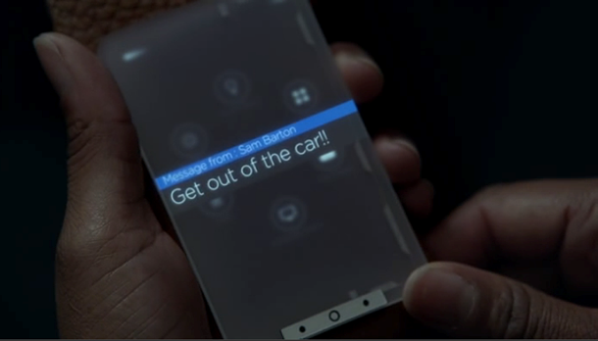 TV shows about the future have not always featured text messaging so prominently. For example, consider the best Sci-Fi show ever written: Star Trek: TNG. In the 90s, the venerable combadge was the ultimate in wearable tech. Simply press it to talk and you have an instantly connected voice stream. But there was one thing the combadge didn't do; it didn't handle text.

TNG used text-based communications throughout the show, but they were never short and personal like an IM. Instead, text was relegated to large reports appearing on iPad type devices or laptops. The idea of using a personal screen to receive concise text-based messages simply wasn't conceived of by the futurists of the day. Contrast this with today's Sci-Fi, particularly Extant, and it's easy to see that there has been a shift in our culture, reflected by the entertainment industry.

The short-form message has become an indispensable part of how we interact, and therefore, it shows up on screen. To this end, the technology used is somewhat unimportant. The message could be SMS, XMPP, Twitter, IRC chat, or any variety of mobile messaging. The common theme is short bursts of thought. Today there's somewhat of a segmentation between text messaging (SMS), instant messaging (chat), and mobile messaging (apps). Increasingly, it's just referred to as "messaging" or "text," as more people are beginning to refer to "texting" someone through Apple iMessage, Google Hangouts, and other services.

The Business Implications
What happens when you have an entire generation that has grown up on SMS and instant messaging? You end up with a workforce that experiences this as its native language. In the past, typical advice on becoming a better communicator may have been, "Learn the art of speaking." This could entail learning to present to large groups a la Toastmasters, or simply learning the nuances of small talk. Certainly, these will continue to be helpful skills. However, an increasing portion of the business world speaks "IM" as their go-to language. Modern advice for those to whom this communications is non-native might include, "Learn the art of texting." As always, there's a relevant XKCD comic (albeit a somewhat crass one).

This preference towards messaging is reflected in the design of modern Unified Communications (UC) solutions. Part of the promise of UC is the ability to communicate over multiple mediums using the same tool. I was recently talking with an associate who works for a small, growing company looking to graduate from their ad hoc toolset to a full featured business phone system. He engaged me in a conversation about Digium's hosted UC solution. It quickly became apparent to me that, given their business processes, the most attractive feature of Switchvox Cloud for them would be the integrated chat. A repeated refrain was, "We need a faster way to share information than picking up the phone."

What's on the Horizon?
If this generation speaks "text / IM," then the next generation speaks "app." The implication of this trend is that the number of different communication methods will be ever increasing. Just like BYOD was a consumer-driven trend, BYOA (Bring Your Own App) looks to similarly proliferate.

This is the one bone of contention I have with CBS's Extant. (No, it's not the acting or plot holes.) I take issue with the fact that it seems everyone on the show is using the same OS across desktop, mobile, and IOT. I suspect that this is due to production constraints. These constraints clash with the fact that the future will feature more ways to communicate and not fewer. But talking about the fragmentation of communications is a topic for another article. For today, I'll simply point out that messaging, although it tends to get much less attention than voice and video, is a powerful mode of communications that can drive effective business outcomes. Businesses do well to take advantage of messaging, and product designers do well to incorporate these features for the market.