Kubi Wins by a Neck

Telepresence robots sort of make sense -- they are intriguing devices that use a variety of UC technologies to enable management by wandering around... for remote managers. They've been of limited applicability, though, because of their prices and operational limitations.

Beam from Suitable Technologies, for example, provides a physical avatar that can roam the halls in search of interaction. Behind the curtain the remote participant uses the arrow keys to operate the robot's motion and view. A front-facing camera and set of microphones captures sights and sounds, while a downward-facing camera provides path visibility. The webcam and microphone on the operator's local computer gives the bot a face and voice.

It's a clever concept that makes use of several technologies, but at about $17,000 Beam has a limited market. It can appeal to those who need to roam, but most knowledge workers are paid for what they do while sitting. And even some of those who do want to wander will find Beam restrictive given that telepresence bots have serious limitations such as the inability to negotiate closed doors, elevators, stairs, and other pathway obstacles such as cords.

While telepresence robots are trying to get their footing, UC suites, video technologies, and workstream tools are improving the productivity and collaborative capabilities for remote users. Broadband connectivity and HD video cameras and screens are now standard issue with mobile devices, desktop computers, and in conference rooms.

Bot Twist
I came across a different bot approach, Revolve Robotics' Kubi, that just might go -- without actually going. Before I explain Kubi, I want to go back to a lesson I learned with Avaya web.alive some years ago. The service, now known as AvayaLive Engage, facilitates conferencing differently than video or bots. AvayaLive Engage offers a cloud-delivered virtual meeting space for avatars, providing a unique interactive experience.

Sometimes people don't give their full attention in meetings. In physical meetings you can see various indications of this, such as when participants access their smartphones. In videoconferences, detecting the distracted can be more difficult because the camera works the same regardless of which app or tab is active.

In virtual meetings, such as those held using AvayaLive Engage, the avatar faces what the remote participant sees. While I was facing the speaking avatar, I took a minute to check my email. Then, the speaker referred to content that was posted in a different space in the room. The other avatars turned to see it... and I got busted.

This situation rarely occurs in videoconferences. Although many systems support remote camera control, it is not frequently used, nor is it practical in multiuser conferences. As a result, videoconferences can be a haven for email checkers -- unless using a Kubi.

Kubi is a simple telepresence robot without wheels, camera, or screen. It requires a video-enabled Apple iOS or Android tablet that sits in its secure cradle. Rather than roll around outside closed doors, the Kubi sits right at (or on) the table, as shown below in a classroom environment. 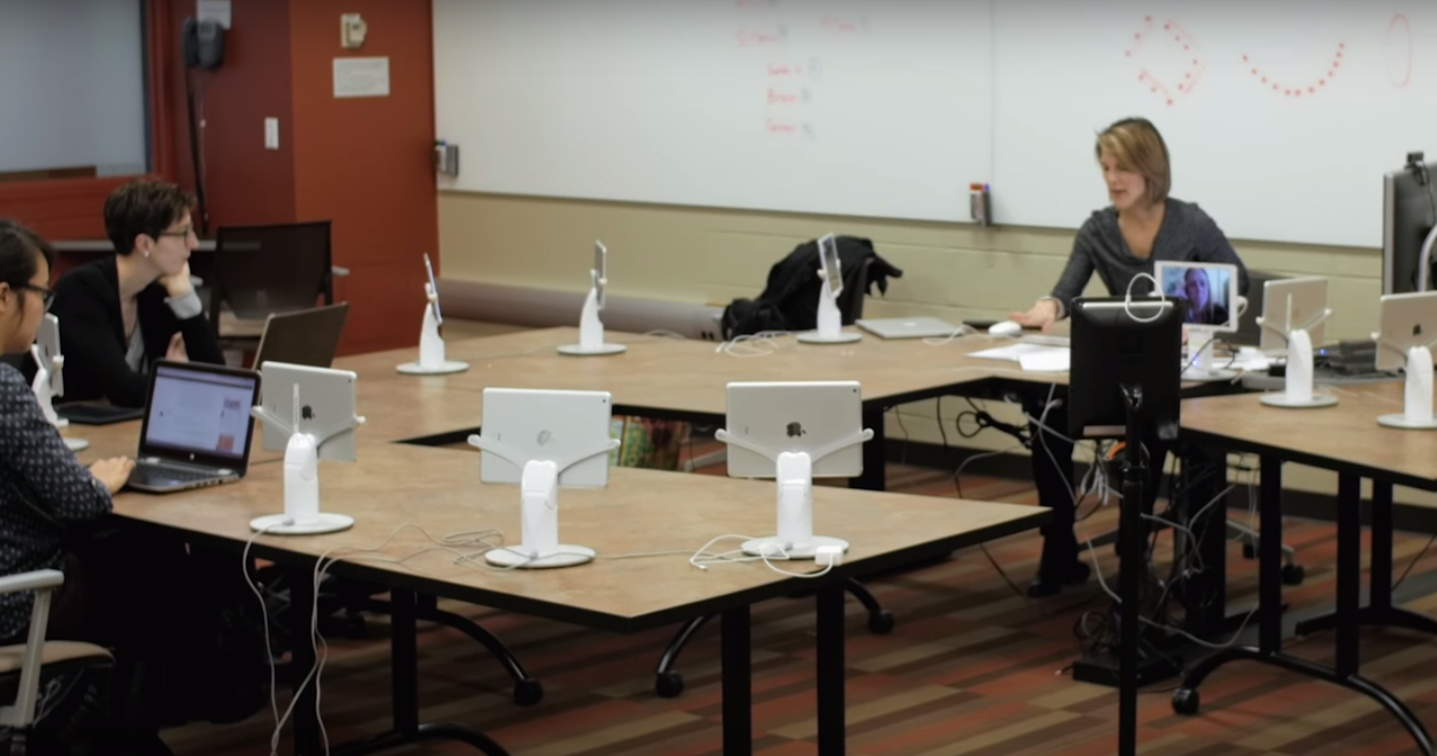 Remote Engagement
Revolve Robotics last week announced an integration with the Zoom video client; Kubi also integrates with the OpenTok WebRTC platform from Tokbox, and other integrations are in development. In using Kubi with Zoom, I found the effort intuitive and the experience engaging. The interaction made me feel more like I was in the same room as other participants than I do with other video tools I use. And when the speaker pointed to something on the wall I had a flashback to that earlier virtual experience I described above. Luckily I was engaged and turned. My engagement was reflected back to the speaker in a similar way as with in-person meetings.

The Kubi effectively sits between a pan-tilt-zoom camera and a telepresence robot. The device costs about $600, can be wall mounted, and includes a four-hour battery. It also supports local AC power, which will charge the customer-provided tablet as well. It can complement corporate collaboration, but also has potential in vertical applications such as healthcare and education. Revolve Robotics says it has several customers in healthcare, including hospitals. I particularly like the use of Kubi for elder care, both by professional caregivers and family members. While Zoom is primarily associated with corporate videoconferencing, the service can be useful for patient check-ins. The Zoom app can be configured to auto-answer calls from specific users. Too bad Little Red Riding Hood didn't have this.

The education apps also are intriguing because the Kubi combines state-of-the-art with traditional classrooms rather than relying on the full suite of new tech used in many remote-learning environments. Revolve reports several K-12 and university institutions use Kubi telepresence robots right on classroom desks. Remote students pop in and interact with in-class students. The instructor is free to utilize the whole classroom, including its traditional whiteboards. The surprise is that remote students even interact with other remote students, literally facing their Kubis toward each other.

The Kubi is a new approach to an old problem with a twist -- affordability.