Last week I spent three days in beautiful Miami Beach, Fla., enjoying the wonderful scenery while attending an analyst meeting Genesys held in conjunction with its annual user group event, G-Force. Genesys estimated 1,300 customers, partners, analysts, and consultants attended the events, at which it made two major announcements: the first creating an application marketplace and the second extending its relationship with Microsoft and Skype for Business.

AppFoundry: Shopping for Integrations
Genesys describes AppFoundry as a marketplace for third-party applications and integrations. With a 20-year history of working with more than 500 partners, Genesys launched AppFoundry with an impressive list of participating partners (30+) and available listings (77 at last count).

The marketplace "gives customers access to all of our partners," Jim Kraeutler, senior director of innovations responsible for AppFoundry, told analysts. Typically, a customer might work with one implementation partner along with Genesys on a new project. Now, if Genesys or another partner has created an integration, say to an industry-specific enterprise application, any other customer can purchase and implement it rather than writing the integration from scratch.

While this could have happened in the past, whether it did depended on "tribal knowledge," Kraeutler said. You only knew something existed if someone told you. Now, customers and partners looking for solutions to integrate into their deployments can easily peruse what's available in the AppFoundry marketplace. For partners creating applications and integrations, AppFoundry provides a direct path to market. They are able to post videos and screenshots, as well as include sample code, of their applications on offer.

Vertical and horizontal applications already are available in AppFoundry, such as shown for three areas in the graphic below. In these areas, the partners shown have already posted solutions on AppFoundry. 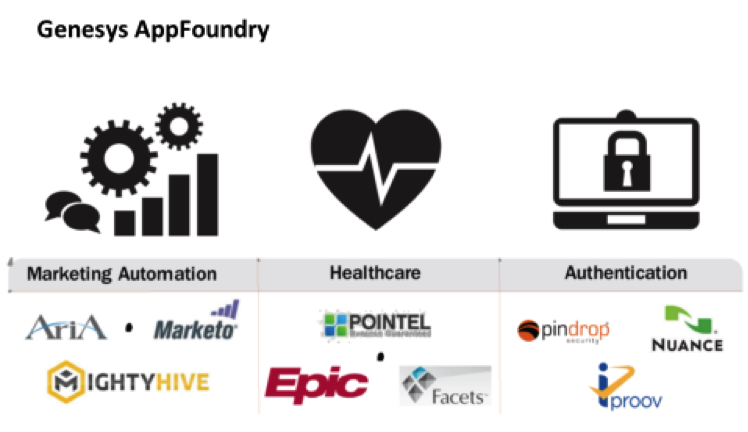 Several of these companies took part in a panel discussion during G-Force. For example, Sanjay Popli, a vice president from Pindrop Security, discussed how AppFoundry allows access to an integration for its authentication and fraud detection solution for enterprise call centers. Genesys' strong customer base in the financial and telco sector, where fraud is common, could particularly benefit for easy access to the Pindrop integration.

With AppFoundry, Genesys joins companies such as Interactive Intelligence, with Marketplace, and Avaya, with Collaboratory, offering marketplaces that include contact center applications. However, neither of these two earlier app marketplaces made a debut with the breadth of applications and partners available today from AppFoundry -- kudos to Kraeutler and Genesys.

Microsoft and Genesys: Contact Center in the Cloud
While Genesys provided much specificity and depth about AppFoundry, it said much less at G-Force about its expanded relationship with Microsoft. I had looked forward to the promised keynote by Microsoft, and the press release issued the next day reported, "Genesys President and CEO Paul Segre and Zig Serafin, Corporate Vice President of Skype for Business at Microsoft, detailed the vision of natively integrated solutions and looked forward to the possibilities of Skype for Business in the cloud." Having been in the audience, however, this is what I saw and heard: Segre and Serafin took the stage together, and then sat on stools -- where they stayed for less than 10 minutes. Segre asked a couple of questions that Serafin answered at a very high level. For example:

But the press release did contain big news, even though Segre and Serafin did not discuss it on stage. Microsoft is in the process of deploying a Genesys cloud-based contact center for its own global operations. Microsoft plans the contact center as a showcase, to be one of the world's largest contact center systems that will extend the Skype for Business PBX, conferencing, and messaging system that approximately 100,000 Microsoft employees globally already use daily.

We have seen major communications and contact center companies partner with Microsoft in the past, with what we can only generously call "mixed" results. First there was Nortel. Then Aspect. Now Genesys has stepped into the limelight. The joint deployment at Microsoft will certainly be a rollout worth watching.

In a recent virtual event, Slack CEO Stuart Butterfield stressed the importance of empathy and soft skills in today’s workplace.