Genesys in Japan: Blending the Old and New 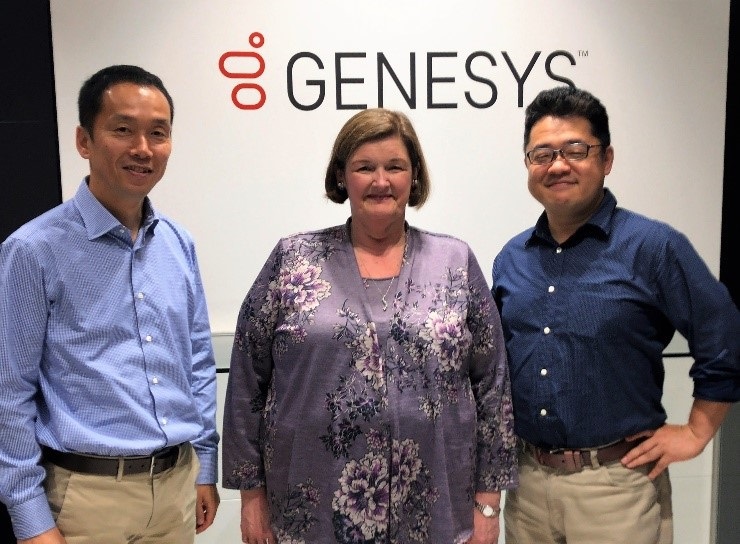 Six years ago, on my first trip to Japan, I visited the offices of three contact center vendors with a strong presence there: Genesys, Interactive Intelligence, and Avaya. I summarized the highlights of those meetings in the three No Jitter posts linked to in the previous sentence. On a return trip to Japan last week, I again had the opportunity to meet with Genesys. Here I’ll provide an update on how the company’s presence in the country has changed over time and with the 2016 acquisition of Interactive Intelligence.
Genesys Japan has approximately 70 employees, half with a Genesys heritage and half who joined with the Interactive Intelligence acquisition. The company operates from the former Interactive Intelligence location, a new, modern office building in the Shinjuku section of Tokyo. Today, the office proudly displays the Genesys branding launched in 2017.
My briefing reflected that blending of Genesys and Interactive Intelligence. As pictured above, I met with Masato Nakano, director, business consulting, who came to Genesys in 2012, and Hiroto Masaki, solution lead, APAC/Japan, cloud/digital, who joined Interactive Intelligence from Avaya in 2015.
Six years ago, Hideki Wachi, then president of Genesys Japan, opined that "large banks will stay on premises; insurance companies are looking at SaaS." It seems he was half right. Nakano offers the view that most Genesys PureEngage customers are more than happy to stay on their premises-based systems. This lack of movement to the cloud is likely due in part to financial climate. As seen in the figure below, while following global trends, Japan’s economy has seen less growth in gross domestic product (GDP) in the last 25 years than, comparatively, the world average or the United States. 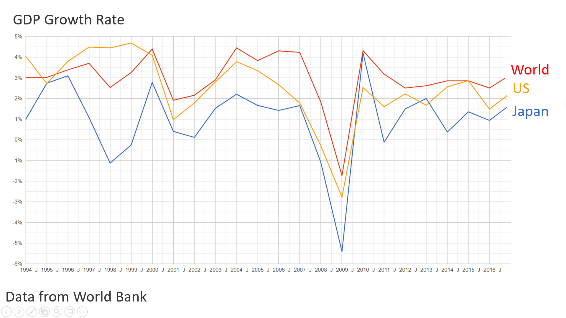 Another aspect of the slowness in cloud migration is Japan’s traditional, hierarchical corporate structures, which tend to be risk averse. “The way that people love the status quo here, especialy the financial institutions and the telcos, even five or 10 years from now, you might still see PureEngage premises [solutions] surviving,” Nakano says. Apparently loving the status quo translates into loving their existing Genesys implementions, which they continue to maintain and expand.
But Japan has another side, one that is inherently modern, fashion-forward, and advanced in technology. And the Japanese brands emblematic of these characteristics are embracing Genesys PureCloud.
Masaki offered two examples of modern Japanese businesses that have deployed PureCloud. The first is Rizap, a fitness club operator that’s become known for its television ads featuring celebrities before and after they undergo an extensive two-month personal training and supplement program. One of the keys to Rizap’s success is in-house professional motivators who offer support and advice throughout the journey to attain targeted body goals. That growing group of motivators work on PureCloud.
The second is IQOS, a Philip Morris International (PMI) brand that has seen explosive growth in Japan since its introduction in 2016, and is now available in more than 40 markets around the globe. Japan is considered a key market for IQOS, a device that heats tobacco instead of burning it, and a test of PMI’s future beyond cigarettes. For the IQOS contact center, PMI chose PureCloud. Masaki proudly says that the IQOS contact center is one of the largest deployed on PureCloud, with hundreds of seats.
While there may be a slightly stronger tendency globally to move from premises to cloud contact center solutions, I’ve met with U.S. customers with large, complex premises-based contact centers that haven’t seen the benefits of a wholesale move to the cloud, either. I agree with Nakano that even 10 years from now, existing premises solutions will still be maintained and supported by the vendors. But like Rizap and IQOS, greenfield companies and products have an appetite for the cloud. Cloud is also the choice of businesses that see modern, cloud-based customer experience as a way to upend traditional methods and compete in an increasingly digitally transformed world.

Is Hybrid Cloud a Concept or a Product?

Will enterprises ever get the full value out of a hybrid cloud architecture?

A new study from Eastern Management Group finds enterprises will use more server virtualization and hybrid cloud than UCaaS through 2024.

Second in a two-part series exploring a move to a cloud contact center, with a focus on implementation best practices

Is Your Head in the Clouds?

The first part of this two-part series looks at decision criteria for moving to cloud contact center and evaluating potential solution providers.

Is Hosted UC Really the Way to Go?

It’s time to get beyond the hype of cloud communications services and get under the covers on guarantees for delivery and performance.

See All in Deployment Models »