In post-earthquake and tsunami Japan, the need for geographic redundancy and disaster recovery is very salient, so cloud is a major topic.

As part of a two-week visit to Tokyo, I had the opportunity to visit with three of the contact center infrastructure leaders that have offices there. This and my next two No Jitter posts will be devoted to highlights of those sessions. My thanks to the analyst relations teams that helped coordinate the meetings--with less than one week's notice--especially Claudine Ruscetta of Avaya, Michael Lawrence of Genesys and Meredith Egg of Interactive Intelligence. 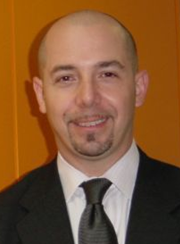 My first meeting was with Keith Martin (shown at right) and Miki Mano of Interactive Intelligence, Country Manager for Japan and Consultant and Analyst Relations Manager respectively. During introductions, both mentioned that they were former Avaya employees; Martin came to Interactive Intelligence in 2009 and Mano more recently, in late 2012. In fact, 30% of the company's growing staff in Japan has Avaya on their resume at one time or another.

Martin’s arrival at Interactive Intelligence in 2009 came about 10 years after the company's initial entry into the Japanese market. Martin describes the culture as "big on brand." For the past 20 years in contact center, that has meant, "no one ever got fired for choosing Avaya."

According to Martin, CaaS (the company's communications as a service offer) has been a big part of opening doors for Interactive Intelligence. As Martin describes it, "We're being invited to RFPs instead of having to beg our way into them." The company offers service through two data centers in Japan, one in Tokyo and one in Kyushu (the third largest island of Japan and most southwesterly of its four main islands).

Why has CaaS made the difference? Martin says, "Cloud is the future in Japan." That may sound like the story in many countries, but it has a special significance there. In all of my meetings, there was a discussion of things "before the quake" and "after the quake." In post-earthquake and tsunami Japan, the need for geographic redundancy and disaster recovery is very salient. As Martin said, talking about marketing efforts in the country, "If you want to get people to a seminar, just say cloud."

Interactive Intelligence is clearly investing in Japan, hoping to catch a market in transition from traditional TDM, premises-based systems to IP, SIP and cloud. Data centers for cloud are just one part of that. The company is moving to a more central location in 3 months, both to accommodate a growing staff and to be closer to a more central part of Tokyo--where both Avaya and Genesys have their offices.