Updates are part of plan to transform customer service from anywhere. 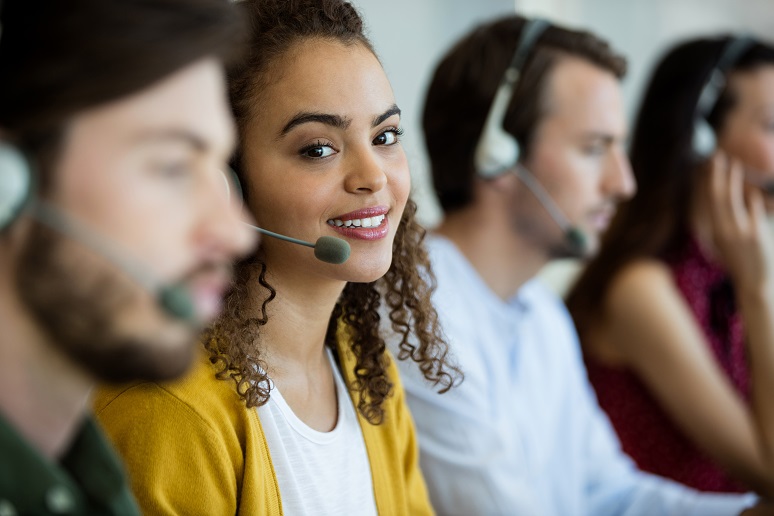 Image: WavebreakMediaMicro - stock.adobe.com
Having secured its foothold as the number one CRM solution, Salesforce launched Service Cloud in 2009 with the goal of bringing similarly cloud-based customer service and support automation features to the market. Much about Service Cloud has changed over the years, with the addition of technology from acquisitions and incorporation of AI, but perhaps never more quickly than in the past 12 months.
As has been widely discussed in blogs and webinars since the start of 2021, the pandemic drove an unprecedented need for companies to accelerate plans for improving digital customer experience. Salesforce today introduced what it is calling the next generation of Service Cloud. The announcement highlights the changes Salesforce has made to Service Cloud to support its customers’ move to a digital-first CX world — technology to support changing customer service expectations and provide connected, personalized service from anywhere on one digital engagement platform.
Modernizing the contact center is one of the key components of the re-imagining of Service Cloud. During a briefing call with Patrick Beyries, VP of product management for Salesforce Service Cloud, much of our conversation centered on two of the features that are part of today’s announcement: Service Cloud Voice and Service Cloud Workforce Engagement.
Service Cloud Voice for Partner Telephony
When Salesforce announced Service Cloud Voice in November 2019, it described the offering as pre-integrated, out-of-the-box telephony with Amazon Connect. It referenced the ability to “bring your own telephony with a CTI partner” as a future. As seen in the graphic below, that future is here, with Service Cloud Voice for Partner Telephony scheduled for general availability this summer. 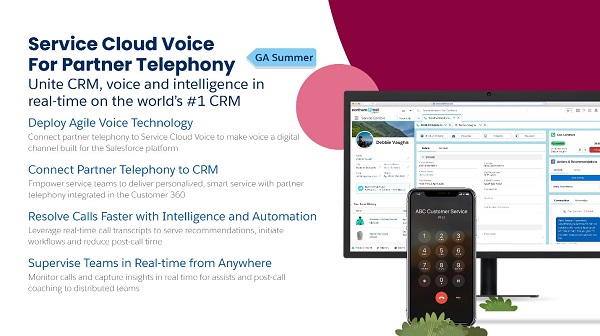 The Salesforce team shared with me, under NDA, a preliminary list of its telephony partners for Service Cloud Voice, and it’s much broader than I expected. From longtime players to CCaaS-only vendors, both global and regional companies, and a couple of CTI integrators, over a dozen firms are participating as Service Cloud Voice telephony partners . All of the companies “signed a pilot agreement to access our technologies so that they can build their solution,” Beyries said.
“If you think about the market dynamics, if a company doesn’t have a story in this space, they're going to be competing against companies who do,” Beyries explained. “So, there was an incentive for companies to be part of the program.”
The interest from customers and prospects has likely helped drive vendor desire to be part of the Service Cloud Voice for Partner Telephony program, as well. “The traction for the initial product [integrated with Amazon Connect] was phenomenal. … hundreds of customers signed up in the first few months,” Beyries reported. “The total addressable market for customers who are not going to be on Amazon is even bigger by a factor of three, four, five or whatever that might be,” he continued.
Based on demos Beyries has already seen, he estimates that several of the companies piloting Service Cloud Voice for Partner Telephony will be ready with a generally available solution at launch in June, with more coming later in the summer.
Service Cloud Workforce Engagement
Announced in December 2020, Service Cloud Workforce Engagement is nearing its June general availability. “Our approach to workforce engagement management was first to make it part of the platform, not a separate piece that needs to be separately integrated and managed, outside of the agent workspace,” Beyries explained. The second objective was to take advantage of the Salesforce Service Cloud platform capabilities — e.g., the data the platform has about agents and the use of digital channels by customers. Salesforce is doubling down on its ability to forecast and capacity plan across all channels, including voice and all digital channels, not just historically but in real-time, he added. 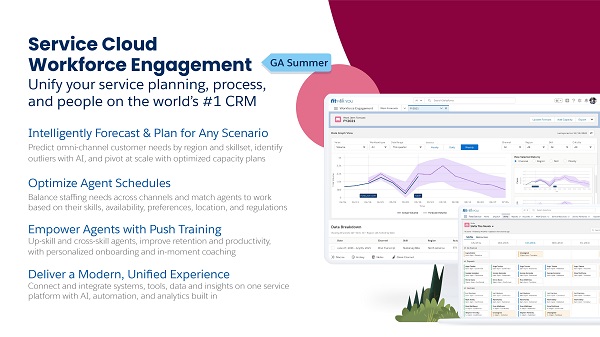 Is Salesforce’s goal to compete head-to-head with the leaders in the workforce engagement space, like NICE or Verint? Discussing the addressable market for Service Cloud Workforce Engagement, Beyries said, “Salesforce is aiming to bring a new, connected approach to workforce engagement that will appeal to some customers using legacy solutions but there is also a lot of 'hidden market’ in this space that is on spreadsheets today.”
Historically (i.e., in the premises world), workforce engagement management (WEM) — especially the scheduling application — was thought to be applicable only to contact centers with at least 100 agents, but typically hundreds of agents or more. Smaller contact centers continued to manage their scheduling needs with spreadsheets. With the advent of cloud WEM solutions, which remove the large initial capital expense, the addressable market has opened to all of the vendors in the space.
This “hidden market” is one part of what Salesforce intends to address with its solution, Beyries said. Pilot customers included companies using competitive WEM solutions as well as those moving from spreadsheets, he added. “Salesforce Cloud Workforce Engagement is anchored on helping customers reduce manual intervention and connecting siloed data,” he reiterated. The scheduling and push training elements of this launch should be thought of as an opening gambit — the application is expected to continue to expand with additional WEM features over time.