The company’s focus on CX has evolved through acquisitions and a growing AI portfolio. 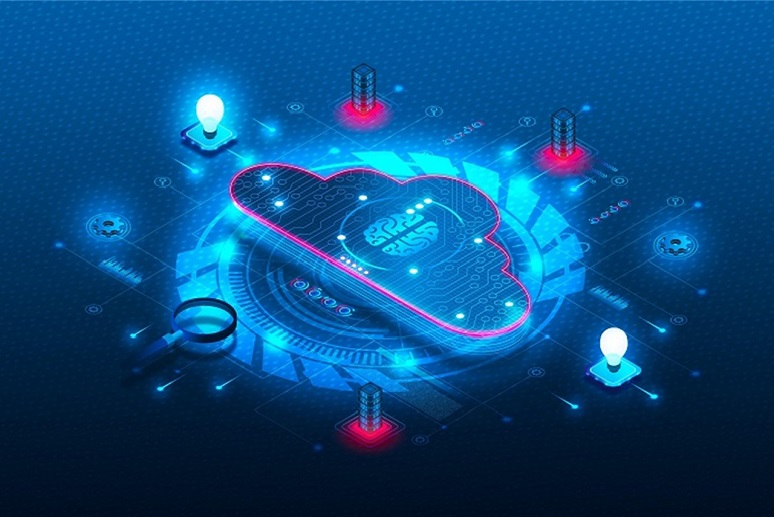 Image: ArtemisDiana - Alamy Stock Photo
In February 2021, Verint—primarily known to No Jitter readers as a workforce engagement management company— announced it had completed a split into two independent companies after a two-year-plus process. The company maintaining the Verint name continues as a customer engagement software company, while the split-off company, Cognyte, consolidated the company’s intelligence and cyber activities.
This month’s Verint Engage user/partner/analyst event, held in person in Orlando, Fla., can be viewed as a coming-out party of sorts – an opportunity for Verint to showcase what they have accomplished with their laser focus on customer experience in the three years since the split was announced and the one year since the split’s completion.
Building a Cloud Platform
As noted, Verint has primarily been known as a workforce engagement management company. Over the years, however, the company has made a number of acquisitions that were designed to expand that application footprint.
Notably, the acquisitions of KANA and Next IT were key to providing the basis for the Digital-First Engagement portfolio shown in the accompanying graphic. KANA brought customer service solutions such as an agent desktop, case management, knowledge management, and email, chat, and social media response management, while Next IT brought an intelligent voice assistant solution. Additional acquisitions, such as social customer service software provider Conversocial and virtual interview solution HireIQ, have continued to strengthen Verint’s digital engagement and workforce management pillars.
What’s relatively new is the company’s work to bring all of the applications listed onto one cloud platform with shared assets.
“The platform changed the way we deliver software,” said Jaime Meritt, chief product officer, Verint during his keynote address at Engage 2022. “We used to build everything into the applications … the platform core allows us to deliver new capabilities once through a platform, and they're available for all of our applications to take advantage of.” For example, when the product team for one application builds a new AI capability, that capability is incorporated into the cloud architecture of the platform. Then, every application on the platform can take advantage of that new AI service. 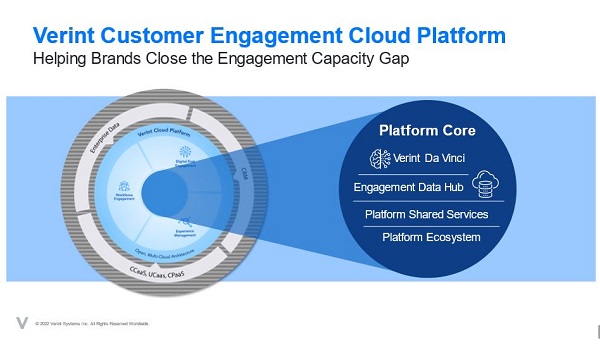 Addressing the description of the Verint Cloud Platform as an open, multi-cloud architecture, Meritt, had this to say, “We're proven to run across all public clouds, between ourselves and our partners. We run on Amazon (Web Services), we run on Google, and we run on (Microsoft) Azure.” Note that Meritt is not claiming that all 40 Verint applications run multi-tenant in each of those public clouds; some applications are run as private tenants in some clouds.
Verint Da Vinci
Introduced in 2020, Verint Da Vinci AI & Analytics is the aspect of the Verint Cloud Platform that contains advanced machine learning models, natural language processing, intent recognition models, predictive modeling, and analytics engines. The most common way Verint customers take advantage of Da Vinci AI is through workflows within Verint applications. They benefit from Da Vinci as part of the overall application subscription. In every release of the cloud platform, which happens several times a year, Verint adds new modules, powered by Da Vinci, which allow existing customers to expand and take advantage of these new capabilities in their existing deployments.
New in 2022, and announced by Meritt during his Engage 2022 keynote are Da Vinci API Services, available through the Verint Marketplace. As seen in the AI Models (orange) portion of the graphic, in the current release, Verint is delivering four of these new API services – biometric identification, cognitive search, transcription, and risk scoring. 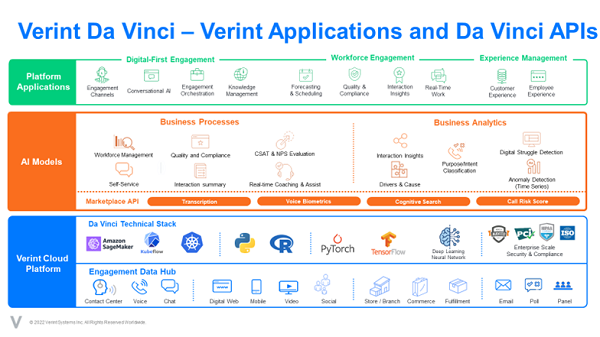 The new Da Vinci API Services will allow developers to use Da Vinci programmatically and extend their own offerings with Verint’s customer engagement AI. They are built for partners and customers trying to create unique intellectual property built on Verint AI. In a briefing with Dan Bodner, CEO of Verint, he told me to expect a regular cadence of new APIs to be added to these four.
Revitalized Marketing Presence
Finally, I have to applaud the efforts of Celia Fleischaker, chief marketing officer, Verint. Since joining the company in September 2020, Fleischaker has worked to both solidify Verint’s customer engagement messaging and bring those messages to new audiences. Working closely with Bodner and Meritt, the Verint Cloud Platform story is clearer than the frankly siloed approach the company was taking before her arrival. Fleischaker, and the team she both inherited and assembled, are making noise – in a good way.