Michelle Burbick
The cloud continues to make its mark on enterprise collaboration. New data from Synergy Research Group (SRG) finds that the total collaboration market – hosted/cloud and premises-based solutions -- will grow 9% in 2019 to reach more than $45 billion. The growth is spurred largely by pickup in the hosted and cloud collaboration segment, which comprise 64% of the total market and is projected to grow 19% this year in aggregate. This compares to an anticipated decline of 3% of revenue on premises-based collaboration solutions.
“Collaboration continues to be a somewhat fragmented market with many disruptive and high-growth companies targeting specific technology areas,” said Jeremy Duke, SRG’s founder and chief analyst, in a prepared statement. “That being said, the overall trend is quite clear in that traditional on-premise[s] sales are shrinking and being replaced by cloud-based communication services. There is now wide adoption of these new emerging cloud services and our forecasts show that they will continue to grow strongly over the next five years.”
In Q3 2018, SRG found total worldwide revenue from collaboration, including on-prem and hosted/cloud apps, was nearly $11 billion, with Q4 revenues expected to be even higher. With on-prem products now accounting for only 36% of total collaboration revenue, SRG noted “a marked change from twelve quarters ago when the market was split evenly between the two.”
As seen in the below chart, SRG data shows that the highest growth segment in the collaboration market in 2019 is expected to be teamwork (also known as team collaboration) apps; that segment is expected to grow nearly 60% in 2019. Team collaboration is followed by communications platform as a service (CPaaS) and video as a service (VaaS) each at roughly 30% growth, unified communications as a service (UCaaS) at roughly 25% growth, and contact center as a service (CCaaS) at roughly 18% growth. 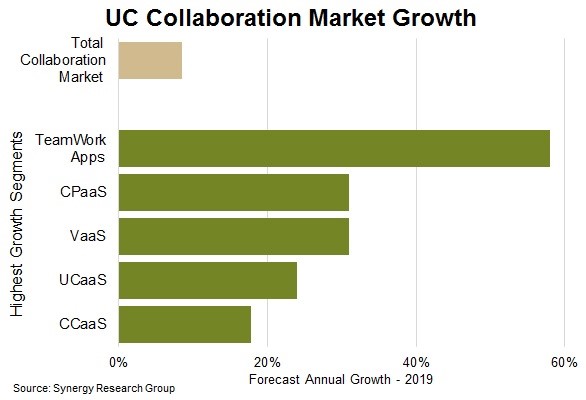 On a vendor basis, Cisco is maintaining its lead in total collaboration, pulling further ahead of second-ranked Microsoft in Q3 2018, SRG said. Among vendors experiencing high growth are RingCentral, Slack, Twilio, and Zoom.