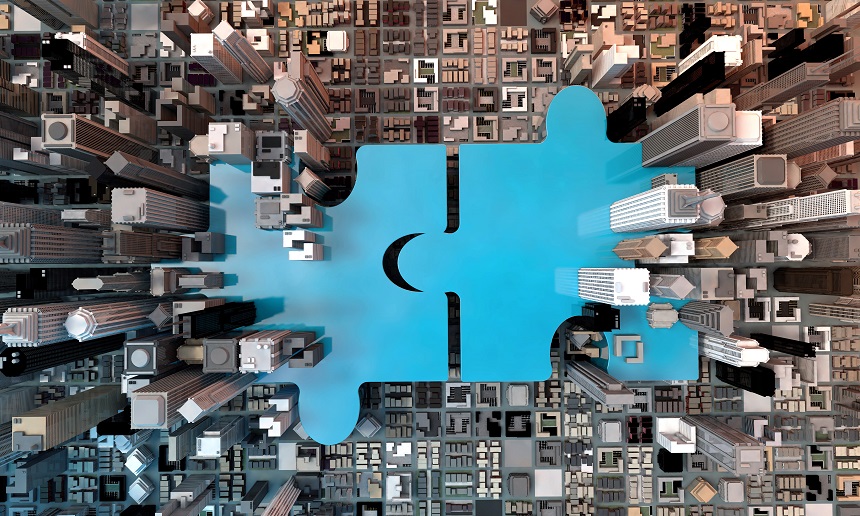 Image: Nespix - stock.adobe.com
When the stock market closed today, Five9 announced — along with another spectacular year of revenue growth — that it’s acquiring privately held Virtual Observer, a provider of workforce optimization (WFO) solutions formerly known as Coordinated Systems, Inc. (CSI) and three-year participant in the company’s partner ecosystem.
Five9 didn’t disclose financial terms but said it expects to close the transaction by March 20. Virtual Observer’s workforce, including CTO Dan McGrail, will transition to Five9.
After its launch in 1972 as a manufacturing software company, CSI pivoted to contact center in 1990, introducing its first contact center application suite in the mid-1990s. The company rebranded as Virtual Observer in 2019 and, as Five9 reports, has over 300 active premises and cloud implementations. More than half are Five9 clients, as well.
Given how long Virtual Observer has operated in the contact center market, it’s not surprising that the company initially offered its solutions on premises. But the company was a relatively early mover to the cloud, announcing its WFO as a service (WFOaaS) in April 2014. At the time, Virtual Observer described its cloud solution as being “developed with an Amazon Web Services infrastructure and services built on Microsoft .NET standards.” The graphic below shows the functionality available from the Virtual Observer suite today. 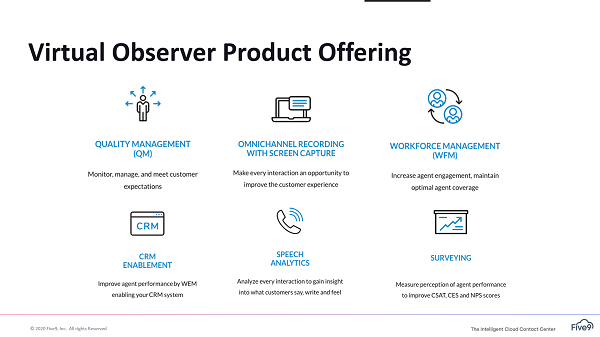 While Virtual Observer has been a key workforce engagement management (WEM) partner of Five9 since 2017, the relationship hasn’t been exclusive. Other WEM portfolio partners include Avaya, Cisco, Clarity Connect (for Microsoft deployments), Mitel, and Talkdesk. Virtual Observer also integrates directly into an agent’s CRM dashboard with connectors and marketplace apps for Salesforce, Zendesk, ServiceNow, Oracle Service Cloud, Microsoft Dynamics365, Freshworks, and more.
For contact center and CCaaS observers, today’s announcement is no surprise. Of the four declared CCaaS “Leaders,” two already have an integrated WFO suite (Genesys and NICE inContact). The third, Talkdesk, announced plans to strengthen the workforce management component of WFO in May 2019. That left Five9 as the only CCaaS leader without its own WEM or an intention to build one. Acquiring Virtual Observer puts Five9 on more equal footing with its direct competitors while reinforcing the market demand for integrated CCaaS and WFO solutions.
Several Five9 competitors have purchased WFO companies in the past few years, with mixed success. Typically, these acquired companies have primarily offered premises-based solutions, at the beginning of their migrations to the cloud. With Virtual Observer, Five9 gains an asset that is already a tried-and-true cloud application.
But what is the biggest reason for choosing Virtual Observer? The fact that Five9 has successfully implemented the solution 150+ times in just three years is unquestionably part of the answer. In the industry analyst briefing, Five9 reports that it has had “great response to the joint offer from our customer base,” and that it sees an “increased interest in WFO at the time companies move to CCaaS.”
In a separate briefing call, Anand Chandrasekaran, Five9’s EVP of product management and design, made a great analogy about integrated platforms and best of breed. “Pre iPhone, you had an alarm clock, a camera, a compass, etc. — and all of these things were separate. Now you just have a phone. That is not unlike how people who are looking at a CCaaS platform are saying, ‘Hey, I would like to do lightweight speech and sentiment analysis without spending half a million dollars to a million dollars.’ ” For customers who already have, or need the deep functionality of, best-of-breed WFO, Five9 said it will continue to partner with Verint, Calabrio, and others.
This year at Enterprise Connect, for the first time, we’ll have a session dedicated to WFO. Moderated by Forrester analyst Ian Jacobs, the “How Cloud and AI Are Reshaping Workforce Optimization” session will discuss, among other topics, the new economics resulting from the intersection of cloud and WFO.

CCaaS evaluations are easier when you start with some philosophical boundaries.

From my perch in the U.K., a look at the exits and new actors in the combined North American and Western Europe report — and how to make sense of it all.

These healthcare and financial offerings are the starting point for the CCaaS provider’s efforts to deliver industry-specific solutions.