Now listed on a major exchange, Avaya will need to make significant noise in the cloud if it's to keep investors happy.

Wed., Jan. 17, will go down as a landmark day in the timeline of Avaya's emergence out of bankruptcy. This morning the company rang the Opening Bell at the New York Stock Exchange (NYSE), signaling its return to being a publicly traded company -- ticker symbol, "AVYA."

In actuality, Avaya started trading on Dec. 15, 2017, but as an over-the-counter (OTC) stock. OTC stocks aren't available through the NYSE or other exchanges, so investors interested in Avaya would have had to purchase the stock from a market maker with inventory. This limited the stock's reach and lowered its liquidity, making a purchase less appealing for large institutional firms. 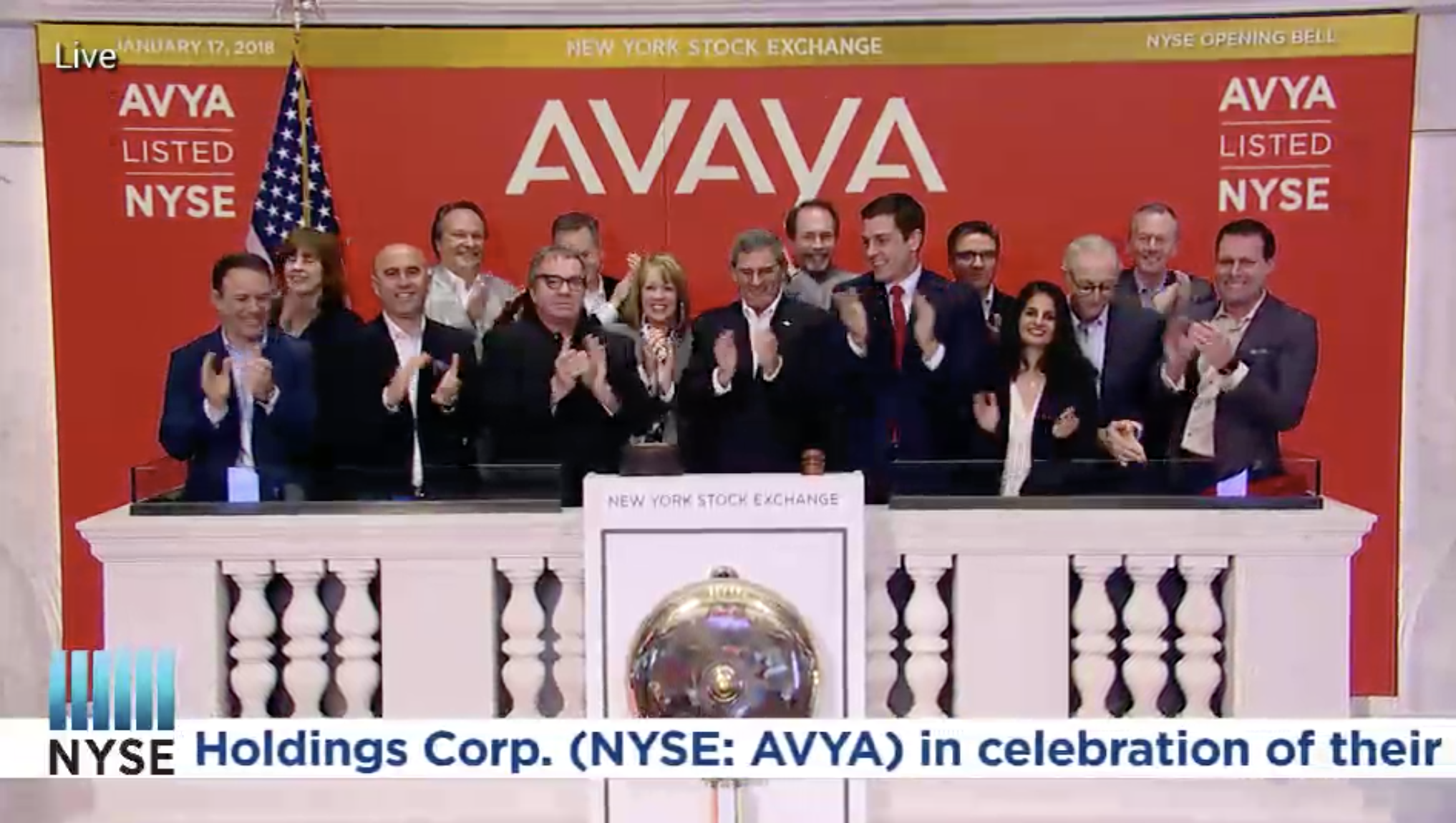 With the NYSE listing, Avaya will have gone full circle in about a 10-year period. Avaya had been a publicly traded company taken private by Silver Lake in 2007. In a condensed history, Avaya then acquired Nortel, went into bankruptcy, sold off its Networking business (which had come from Nortel), came out of bankruptcy, and is now back on the stock market. The financial restructuring gives the company some needed relief as it frees up about $300 million in cash to be invested in innovation or acquisitions to grow.

As a publicly traded company, Avaya will receive significantly more news coverage than it did as a private company, particularly from the business press that caters to investors -- organizations like Bloomberg, Barrons, SeekingAlpha, and The Wall Street Journal write almost exclusively about companies on the stock market. Quarterly earnings will generate a flurry of news analysis, for example, as will news on products, executive changes, competitive wins, changes in strategy... the financial press will pick up and magnify literally everything. Good news and word about smart strategy spreads much faster when you're public, since more people care.

However, being publicly traded isn't all roses. The financial press can be brutal to companies that struggle. An earnings "miss" or even light forward-looking guidance can put a company's short- and long-term strategies into question. Even companies that perform well aren't immune to the scrutiny; the media sometimes lambasts companies to the point of calling for the CEO's and other top executives' heads.

A recent example of this is coverage of Cisco. Over the past decade the company's financial performance has been impressive -- not many near-$50 billion companies have the gross margin and profitability of Cisco. However, once growth had stopped many of the analysts covering the company wanted former CEO John Chambers replaced years before he stepped down from that role in July 2015. The financial markets giveth, and they taketh, and those opinions can change rapidly.

Financial analyst reports and investment media coverage don't have the same impact on enterprise IT buyers as something like Gartner's Magic Quadrant, but they certainly can sway people's opinions. A few consecutive bad quarters leads to speculation regarding the company's overall strategy, competitive positioning, leadership, and other issues, and that can influence the buyer's mindset. This is why so many companies go private during transitional periods; Polycom, Dell EMC, and Gigamon are recent examples.

The biggest challenge for Avaya and its future revenue and stock growth is its lack of association with the cloud. Wall Street rewards companies that have an obvious cloud play, and punishes those that don't. Evidence of this is in market caps, shown in the table below (revenue based on estimated fiscal-year 2018 guidance from each company; Avaya hasn't provided a formal number so my estimate may be a bit low but it's close enough for this exercise).

Obviously more than revenue goes into a stock price. Profitability, cash flow, and other measures certainly factor in, but the trend is pretty clear. The market views cloud-associated companies much more favorably than companies that aren't known for their cloud plays. (You might wonder about Mitel's market cap. Since acquiring ShoreTel, its cloud business has become more credible, but the company is still in the midst of trying to convince a broader set of investors to buy into its story.)

Avaya certainly has a sizable legacy installed base, and it could grow significantly by flipping it to the cloud. But that installed base can be a double-edged sword. In the press release announcing the bell ringing, Avaya CEO Jim Chirico said that only about 10% of the company's contact center customers have migrated to the cloud. A bullish outlook is that this gives Avaya a huge opportunity. The bears would say this creates significant risk as every cloud contact center competitor will be trying to poach those customers.

In fact, on its quarterly earnings calls, I've heard cloud contact center vendor Five9 talk specifically about how many customers it's taken from Avaya. In other words, it's positioning Avaya's installed base as a benefit. Almost every cloud vendor has taken a similar approach, but Five9 tends to be the loudest.

The task ahead for Chirico and company certainly isn't simple. Avaya's cloud strategy is still in flux, but it is getting better. As Chirico shared in an interview with Dave Michels, revenue growth is his goal for 2018 (see today's No Jitter post "Avaya CEO: Running to Win"). To accomplish this, the company needs to bring some clarity to its cloud story.

Avaya Private Cloud Service (APCS) is a strong solution for enterprises, as most larger companies don't want to be on a multitenant platform on which the cloud provider has control over things like configuration updates and maintenance windows. APCS provides the cloud benefits with the control big businesses want.

But Avaya will really need a clearer strategy in the small-to-midmarket segment, where it'll face competition from the likes of RingCentral and Vonage. Right now, it has its "Powered By" offering, which from all accounts has been doing well but requires significantly more time to configure compared to competitive services. It also has Zang, which looks like it's on its way to being back-burnered. From what I understand, the company is working on a fully automated version of IP Office in the cloud that could go toe to toe with cloud competitors on simplicity.

Assuming the engineering team does its part -- and I have no reason to assume it won't since product development has always been a strength -- making the story clear falls on Chirico and sales and marketing. Avaya has arguably one of the broadest cloud portfolios that can deliver a cloud experience to customers of all sizes, but that association isn't there yet. To accomplish this, I'd like to see Chirico become more of a spokesperson for the industry rather than just for Avaya. With the bankruptcy behind it, now's the time to shift the focus of discussion from restructuring and the company's evolution to the market -- and that could help create an association between Avaya and the cloud and get people thinking of Avaya through a different lens.

To Avaya I say, congrats on being re-listed, welcome back to the capital markets, and good luck.

Hear more from Avaya at Enterprise Connect 2018, March 12 to 15, in Orlando, Fla. Register now using the code NOJITTER to save an additional $200 off the Advanced Rate -- extended through this Friday, Jan. 19 -- or get a free Expo Plus pass.