Wainhouse Research has been working closely with the Alcatel-Lucent Enterprise (ALE) product team over the last six months, and has gained a deep understanding of its Rainbow platform strategy. This is an update on the experience Rainbow currently provides, ALE's strategy, and our analysis of the company's direction.

In December 2016, ALE launched Rainbow, officially joining the team messaging party. In doing so, ALE bellied up to a bar crowded with hipsters from the likes of Unify (Circuit), Cisco (Spark), Fuze (Spaces), RingCentral (Glip), Mitel (MiTeam), BroadSoft (Team-One), and Slack (Slack). Elbow room has gotten even tighter since then, with Avaya (Zang Spaces), Microsoft (Teams), and a growing number of other well-known vendors nudging in. 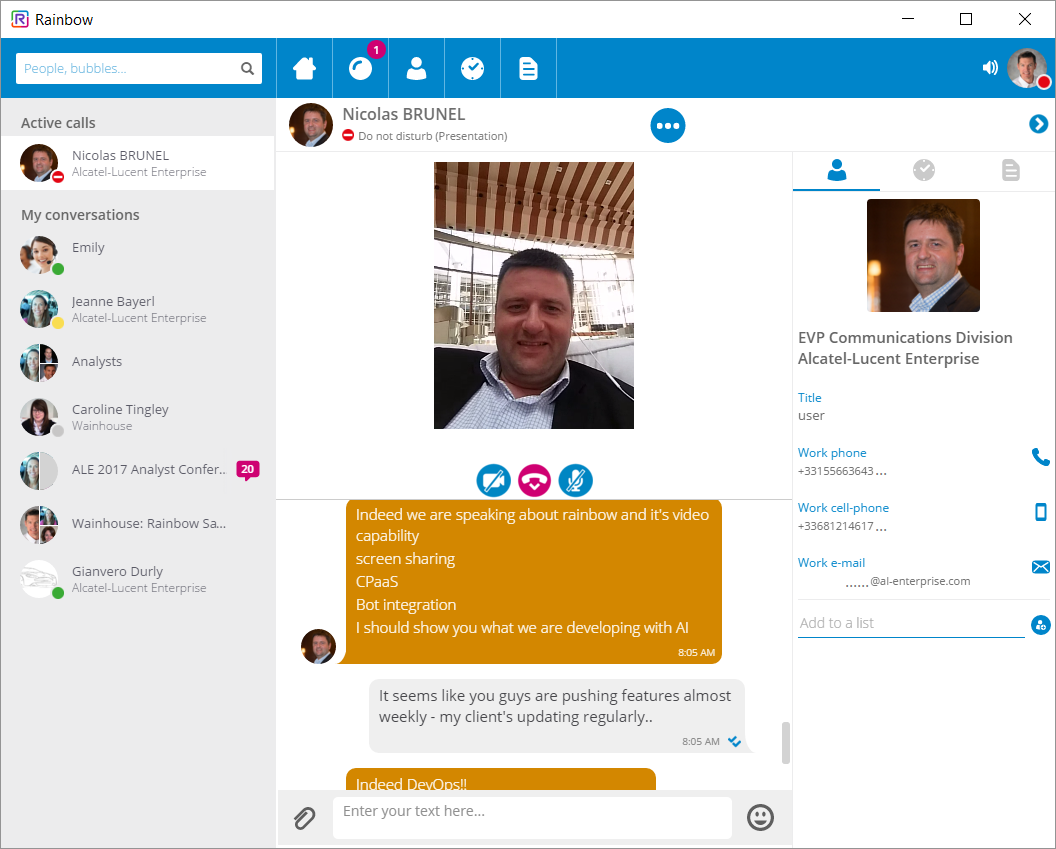 ALE is also quick to point to Rainbow's CPaaS capabilities, which expand Rainbow's APIs to support additional integration with enterprise services and workflows. ALE's vision is to deliver vertical and enterprise-specific value through tight integration into Rainbow's service stack -- with as little friction as possible. "Open" is a key word in this strategy, and ALE's willingness to integrate to third-party PBXs indicates it is doing more than throwing buzzwords around.

This open approach, specifically the third-party PBX integration, has us paying attention. Let's step back for a moment and look at the state of the current UC conversation. If I were a teacher, the UC industry should expect to receive a failing grade on its report card as we head into summer. During my parent-teacher conference with the industry's parents, I would smile and explain, "Well, while UC obviously has potential, s/he's just not delivering results!" I'd then turn my Chromebook around and show them the following Wainhouse Research survey results:

If you want to achieve UC's full potential, you need to deploy a consistent experience across the enterprise. You need to ensure adoption! How useful do you expect your communications- enabled business process to be when it only supports some subset of your users?

For the average enterprise, sporting PBXs from multiple vendors, several UC-capable platforms, and a growing number of team messaging and other collaboration apps, dismal adoption rates should be no surprise. When asked, our IT decision-maker panels point to three common barriers standing in the way of expanding UC deployments: internal politics, lack of a compelling business case, and network concerns/costs.

The fact is, coming up with a secure, timely, and cost-effective UC migration plan is difficult, if not impossible, for the average enterprise. And if you are planning to deliver a unified experience by migrating your users from their existing messaging, conferencing, and telephony experiences and onto a new UC platform, you should make sure you have a good book. Or three -- this is going to take some time (maybe consider the whole Game of Thrones series).

The Rainbow approach directly targets the common barriers to a UC deployment, delivering a short-term path to a fully functional UC experience:

To be clear, Rainbow is still maturing, and several critical enterprise features are yet to come -- specifically, native screen sharing, conferencing service integration, and native telephony. And ALE is not alone in this conversation. As noted, the team messaging bar is crowded with many well-known competitors. However, ALE is in a select group of vendors working aggressively on the overlay model, delivering a unified user experience powered by a range of integrated solutions. While platform migration is often an expensive headache, users have proven how quickly the application layer can move. And the vendors that win at the user level are well positioned to consolidate back-end services over time.

A look at the latest product news from Salesforce, Siemens, Citrix, Mitto, Ribbon, Google, and Smarsh

Both can’t wait to be king of the enterprise. Take these crucial considerations into account when choosing the right provider for your organization.

User Adoption in the Age of Coronavirus

During the WFH rush, most organizations focused on getting the technology to work. Now it’s time for training and user adoption programs.