With proper engineering, the cloud simplifies 911 call routing and greatly increases the odds of an emergency call reaching the right PSAP to save lives.

If I've learned one thing from this industry, it's that everything changes. What you thought was the best way to do something will one day be seen as outdated and wrong. Don't keep up with changing technologies and you will be obsolete quicker than you can say software-defined network.

Worse than becoming a dinosaur, not keeping up with these fast moving changes might make you dangerous. And no, not in a cool way. Case in point is how you design, configure, and manage your enterprise 911 system. Following best practices from the early 2000s could put lives at risk and make your company legally liable for wrongful injuries or worse, deaths.

Understanding E-911
Before I go any further, I feel the need to define a few terms pertinent to understanding E-911 (Enhanced 911). While this is only a subset of what you might encounter while planning for E-911, these definitions should be enough to make you dangerous (in the cool way this time):

PSAP - A Public Safety Answering Point is a call center responsible for answering 911 calls. As of today, the United States has approximately 6,600 primary and secondary PSAPs in 3,135 counties, parishes, independent cities, boroughs, and census areas.

ELIN - An Emergency Location Identification Number is a North American dialing plan number used to represent one or more telephone extensions off a PBX. Telephones that use the same ELIN should be physically located near one another. ELINs can be used when it is not necessary to identify the exact location of every telephone in a business, but rather manage them at a zone level. ELINs directly align with ERLs.

ERL - An Emergency Response Location is typically used by a PBX to define telephone locations such as a floor or fire alarm zone. A company may have many ERLs, but fewer than the number of employees or DID numbers. An ERL might be the company address along with information about a location within that address (e.g. southwest corner of the second floor). Typically, only one ELIN is assigned to an ERL, but there are instances that require multiple ELINs to be assigned to a single ERL.

ALI - Automatic Location Identification provides the PSAP agent with location information about the 911 call. ALI records are contained within a public safety database that is typically managed by a LEC (Local Exchange Carrier). An ALI record consists of the following:

PS-ALI - The Private Switch Automatic Location Identifier is a copy of an ALI database that can be used by private companies to map ELINs to specific locations. This provides the emergency response agent with more specific ALI information for the caller and is useful when a company has multiple building addresses. It's also the mechanism that allows additional information, such as floor number, to be presented to the 911 agent.

Does that sound a little overwhelming? Actually, it's not that bad. When someone calls 911, his or her ELIN is sent over a local trunk to the PSAP that serves the caller's area. Upon receiving the call, the PSAP uses the ELIN to retrieve the ALI for the caller. That ALI information is then displayed on an emergency response agent's PC screen. The caller's location is known, and the emergency is managed.

911 from a cell phone is a little more complicated; but by using a combination of technologies such as Assisted GPS and cell tower triangulation, the caller's location can also be determined. In this situation, the PSAP receives a special ELIN called a PANI or Pseudo ANI (Automatic Number Identification).

The IP Challenge
Everything I've explained so far would have been enough for you to design that early 2000s or late 1990s PBX. That's because those old analog and digital telephones were physically connected to the communications system via a fixed wire, and that communication system had one or more physical trunks to the LEC. The telephone number (think ELIN) was associated with the wire and not the user or the telephone itself. If you unplugged your telephone from the wall jack in your office and plugged it into a wall jack in the cafeteria, your phone number would change and 911 calls would direct emergency responders to the proper location.

All that changed with IP. With IP, there is no wire that can be traced back to a punch down block and a telephone line card. IP telephones attach to a LAN that logically connects them to the communications system. Of course, wireless LANs eliminate the wire altogether as bit and bytes fly through the air.

ERLs can also be associated with wireless adapters for in-building mobility. Using special functionality inside an Access Point (AP), a mobile device can move from AP to AP yet still map to a valid E-911 location.

In addition to issues from IP telephones, the trend to centralize SIP trunks into an enterprise's data center complicates the association between a caller, a location, and the correct PSAP. Clearly, a new way to engineer E-911 solutions is required.

Thankfully, there are companies that offer cloud-based solutions to map remote IP users to the correct PSAP. Three that come to mind are RedSky, 9-1-1 Enable, and 911 Emergency Telecom. All allow you to send 911 calls directly to their clouds. Their clouds will then route 911 calls to the appropriate places.

For example, you might consolidate all your trunks in Chicago and have a "trunkless" gateway in Minneapolis. If a Minneapolis user makes a 911 call, it will be sent out a SIP trunk in Chicago to a cloud service which will then send the call back to Minneapolis and the correct PSAP. This moves the responsibility of finding the correct PSAP away from the enterprise and to the E-911 cloud provider. Additionally, it allows the cloud provider to take ownership of many of the E-911 technical aspects. The enterprise still needs to manage the ELINs and the ERLs, but after that, it's just a simple phone call to the same place. 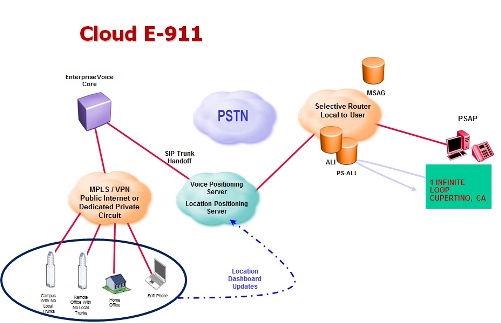 Who owns the 911 cloud? Like the early days of telecom, there are several tiers of providers. The same holds true with cloud-based 911.

There are four providers of IP 911 cloud services in the United States, and none of them sell directly to end-users. These services are called VoIP Positioning Centers (VPC). It is important to understand that the Tier 2 providers (Redsky, 9-1-1 Enable, 911 Emergency Telecom, etc.) resell and provide access to the same four Tier 1 VPC networks. They also provide the management dashboards and account administration tools.

Another component to consider is the Emergency Call Routing Center (ECRC). Think of it as the failsafe PSAP in the VPC cloud. If a call fails to route in the 911 cloud, an attempt is made to manually route it to the proper PSAP.

I expect that cloud services will become the way that most enterprises implement E-911 in the near future regardless of trunk centralization. With proper ELIN and ERL engineering, the cloud simplifies 911 call routing and greatly increases the odds of an emergency call reaching the right PSAP. In short, it may help save lives and isn't that what this is all about?

Mobile 911
Until very recently, an enterprise's E-911 strategy for mobile SIP clients was simple. If you weren't connected to enterprise's wireless LAN, you wouldn't use your SIP client to make 911 calls. That's because there was no way of associating a mobile user with the correct PSAP. Cell tower triangulation doesn't come into play when you are on a public Wi-Fi or 4G/LTE network.

Mark Fletcher addressed a new and powerful way of delivering E-911 services to mobile devices in Saving Lives with WebRTC. But he described emergency calls on the cellular network; his new method did nothing for mobile SIP users.

Thankfully, this too is starting to be addressed by E-911 in the cloud. One company, 911 Emergency Telecom, offers a product called SoftLoc that allows remote users to specify their current location before placing an emergency call.

Notice that I said remote users and not mobile users. SoftLoc works best when you are on a device that will be in the same place for a significant period of time. For example, when you setup your PC in a coffee shop you can enter the location of the coffee shop. However, it doesn't make much sense to do so on your smart phone as you drive around town. In that case, you are back to mobility rule number one: Don't use a SIP client to make 911 calls.

Wrapping Up
I didn't expect this article to be so lengthy, but once I got going, it was hard to know when to stop. Hopefully you've learned something and are now prepared to dig into 911 even deeper than I've taken you.

In fact, if you are going to implement E-911 on your communications system, I highly recommend that you take the extra steps to become even more knowledgeable. You don't want to mess around when it comes to life or death situations.