Video conferencing has long been one of the darling segments within the high tech industry. Compound annual growth rates of 20%-30% were common in the past decade. The days of pervasive video, when all of us would be using visual communications in our ordinary work day, were said to be just around the corner. Ironically, with video now available on just about every Windows, Macintosh, iOS, and Android device, and with video capabilities embraced by nearly every unified communications supplier, the vendors of enterprise video conferencing solutions have seen their revenue streams hit the doldrums.

Recent market statistics
The business video conferencing market has a seasonal variation. Q4 is typically the biggest of the year, while Q1 is typically a downturn. So sequential growth in Q1 is commonly negative. As the graph below shows, this sequential effect has happened every year for the past 4 years. Hence, year-over-year growth is much more telling. In 2013, Q1 numbers for the industry are down 12% from Q1-2012, and the Y2012 quarter wasn't so great, up just 6% over Y2011 (which was up 20% from Q1-2010). It is a solid downward trend. As the Year-over-Year graph shows, in 3 of the past 4 quarters, annual growth has been negative, and in the remaining quarter it was zero. Not very encouraging. 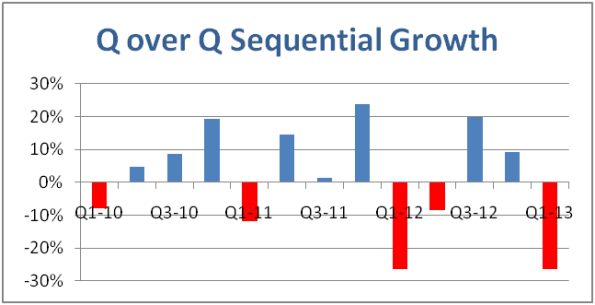 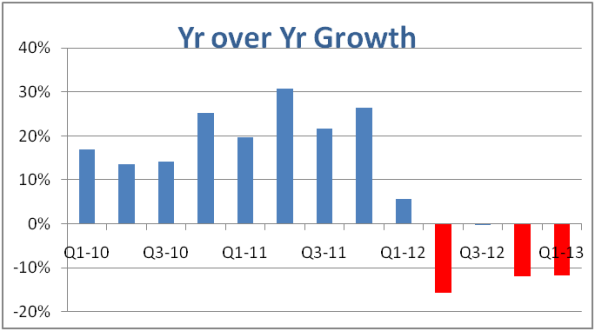 Polycom actually picked up market share in Q1-2013, since Polycom's revenues were down only 11%; Cisco on the other hand was down 22%. Logitech's financial report cited LifeSize sales declines of 19%. Rumors of corporate restructuring have begun circling in the vendor world, and several "reductions in force" have already occurred. All this at a time when the Chinese vendors, in contrast, reported in with a 22% gain collectively in Q1.

1. Self-inflicted wounds
As Pogo once said, "We have met the enemy, and he is us."

Cisco: If you get a senior Cisco person to talk off the record, he will admit that the company badly bungled the 2010 Tandberg acquisition. The details here would merit its own NoJitter story. A fact of life is that video conferencing is mostly a "push" sale, not a "pull" situation and in the good old days, nobody was better at pushing than the Tandberg sales force. The overall effect was to increase awareness and to grow the market. Integrating the Tandberg sales team into the Cisco sales model has led ultimately to the elimination of video specialists and with that, push capabilities have died as well.

These problems extend to channel partners also. Cisco's channel model is largely incompatible with the video conferencing market where pre- and post-sales support are crucial elements and where higher margins are required to make the business viable. The results speak for themselves.

Polycom: Polycom has hitched its wagon to the Microsoft pony. But it turns out, there are lots of other video conferencing vendors in this wagon train, so it's not clear what the distinctive advantage here really is. To add some confusion, Polycom asserts it is a software company, but most of the customers know Polycom for its outstanding hardware. And most of the hardware has been renamed. Polycom doesn't sell video MCUs anymore, it sells RealPresence platforms. Or you could opt for the company's RealPresence Cloud AXIS Suite, which isn't a suite, and doesn't run in the cloud. And while CloudAXIS integrates contacts from Skype, GoogleTalk, and Facebook, it doesn't interoperate with any of these. Am I the only one who is confused?

LifeSize: Logitech's new CEO shot LifeSize between the eyes in January when he implied LifeSize was up for a strategic review and might actually be sold off. That sucked the air right out of the LifeSize sales force in Q1. Resuscitation efforts have just begun.

Sony: A decade ago, Sony's strategy was to wait till the day that video conferencing was an enterprise commodity and customers, especially SMB clients, would opt for solutions from one of the world's best known brands. That hasn't happened, and Sony has retreated from the market, turning its business outside Japan over to relatively weak distribution partners. You won't see Sony promoting video conferencing any time soon. Consider Sony to be missing in action.

2. Video Focus has shifted
For many customers, room video conferencing is old hat. The excitement and attention are on personal solutions, both fixed and mobile. Unfortunately for the industry, room video conferencing is where all the money is; in fact making a profit in the personal conferencing space has proven to be difficult. Those customers today who are still interested in room solutions are often looking for low-cost "huddle" room devices that they can deploy in larger numbers and in infrastructure that can scale cost-effectively to support those numbers. Should they consider legacy solutions, or wait for the new hosted, cloud, and hybrid solutions that they read about? Best bet is to wait and see--and that's what they are doing.

3. New alternatives have muddied the waters
Should Microsoft Lync or Cisco Jabber be the basis of next-generation video conferencing deployments, rather than more traditional personal systems? If a customer is already using Citrix GoToMeeting or Cisco WebEx for web conferencing, and those solutions now support high-definition video at no extra cost, what is the motive to purchase additional video conferencing systems? The personal conferencing space has become very muddied, with so many solutions expanding into new spaces. We haven't even mentioned Skype. And certainly many prospects are reading about WebRTC and waiting to see what that technology will actually deliver....

So, What's Ahead
We're heading off the InfoComm show in Orlando this week where many of the video conferencing faithful will gather. Besides the usual spate of new product announcements, we expect to see no fewer than three new companies exhibiting video solutions, all of whom could rightfully be dubbed Cisco/Tandberg spin offs. Maybe the new guys can bring back that old time black magic for the video conferencing market.