The Viking in Boulder

As Spectralink returns to life as an independent company, its Danish CEO is ready to bring the hammer down.

Last week I met a startup that's doing about $100 million in revenue. The company is called Spectralink, and it was newly incorporated in Colorado (for the second time) about 10 months ago.

Maybe "startup" isn't the right word. The firm does after all have more than 20 years of experience in wireless phones, about 80 employees, a European office, and a fairly strong brand. But it's a new company again, going through many of the same tribulations as a startup--like creating a logo.

The first time around for Spectralink started back in 1990, just a stone's throw from its current headquarters office. That's where the company began as a pioneer in wireless voice endpoints. This was pre-IP, pre-Wi-Fi and pre-DECT. During the PBX digital era, vendors offered a line of proprietary phones--but few had the expertise or volumes to do so effectively for wireless devices. Partnerships were forged, and Spectralink made feature-rich digital phones for most of the major PBX manufacturers.

VoIP and SIP were emerging as the future for multi-vendor endpoints. Polycom had an early lead in the segment with its desk phones and decided that wireless devices were a logical product line extension. It acquired market leaders Spectralink (Wi-Fi) and Kirk (DECT) in 2007 and grouped them into a division known as Enterprise Wireless Solutions (EWS). Most recently, this EWS unit was under the leadership of Sten Dyrmose--a Danish executive from the Kirk team.

EWS held its own, but didn't flourish. Partnerships became tougher as many comms vendors saw Polycom as a competitor. Polycom's leadership changed, and focused more on video at the expense of voice and especially wireless. EWS did not compete well internally for marketing dollars, or mind share from the sales team. Then came the onslaught of personal mobile devices (smartphones and tablets) and their apps.

The EWS team realized it could be more successful outside of Polycom, and got the Polycom executive team to agree. Sun Equities, a diversified investment firm, expressed interest as it was looking to expand into technology. An agreement was struck, and Sun Equities acquired EWS from Polycom last year. Kirk and SpectraLink, still largely separate from one another, were spun-out together into a new subsidiary of Sun Equities in December 2012.

Sten Dyrmose was named CEO, and his first priorities were to fill the gaps that Polycom's larger infrastructure had been meant to provide--IT, marketing, distribution, etc. The company reinstated "Spectralink" as the new corporate name. The team also had to move out of Polycom's facilities, so they decided the company should again be headquartered in Boulder. Then came the task of actually converging Kirk and Spectralink into the new Spectralink.

Dyrmose may speak softly, but he carries a big hammer. Seriously. "Mjölnir", or Thor's Hammer, comes from Norse mythology as a fearsome and powerful tool capable of leveling mountains. The actual hammer on his desk may be symbolic, but he's clearly been swinging away at the geographic and other barriers hindering his firm. 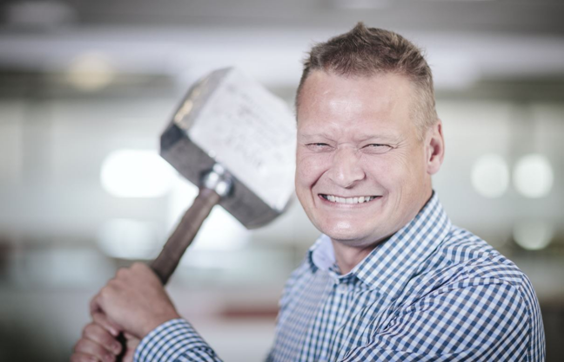 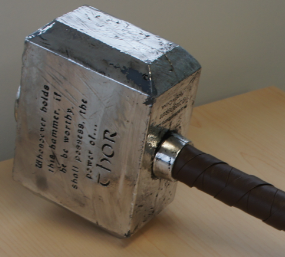 Dyrmose now speaks of a united Spectralink. One R&D team and one sales team. The Kirk brand will disappear as the firm combines the DECT and Wi-Fi brands into one portfolio. Dyrmose says the new Spectralink is nimble, able to move quickly and easily--though that might be because everyone at the company has a wireless phone.

Last June, Spectralink saw a 20% growth in sales after its first full quarter as an independent firm. Dyrmose cites some pent-up demand from customers waiting for the sale to complete. He also believes a dedicated sales team, no longer distracted by declining video equipment sales, had an impact. More importantly, he's optimistic about the future--so optimistic that he gives out Danish hoptimists as rewards.

Dyrmose hinted at some overdue product line enhancements coming in 1Q2014, and claims that relationships with third-party communications system vendors are dramatically improving. Spectralink's relationship with Microsoft Lync, initiated during the Polycom ownership, is on track to play-out well. Microsoft designed wired phones specifically for Lync, but the wireless opportunity was neglected. Spectralink's Wi-Fi and DECT phones are both in the final stages of Microsoft's certification process.

Few hints were offered on the upcoming portfolio enhancements other than converging product lines. Michael Lanciloti, VP of Marketing and Product Management, stated that smartphones have changed user expectations, and Spectralink intends to respond. I asked if firms are moving away from dedicated wireless phones to apps running on general-purpose smartphones, but Lanciloti doesn't see smartphones as a big threat.

"Smartphones are not always smart" Lanciloti said. Key wireless verticals such as healthcare and retail have compelling requirements best served by devices fit for those purposes, he believes, adding that smartphones introduce numerous problems for enterprises including continuous changes in product and accessories. Spectralink batteries are easily swapped between and during shifts. Another limitation of smart devices is they are not as rugged when dropped or even in everyday use when compared to a Spectralink device that typically offers a 5-6-year useful life.

Spectralink is going to be fun to watch. The features and capabilities of wireless endpoints across the industry have not been particularly innovative, but a startup mentality might indeed change things.