RingCentral now has control over the video stack, and that’s a fundamental key for the evolution of its platform. 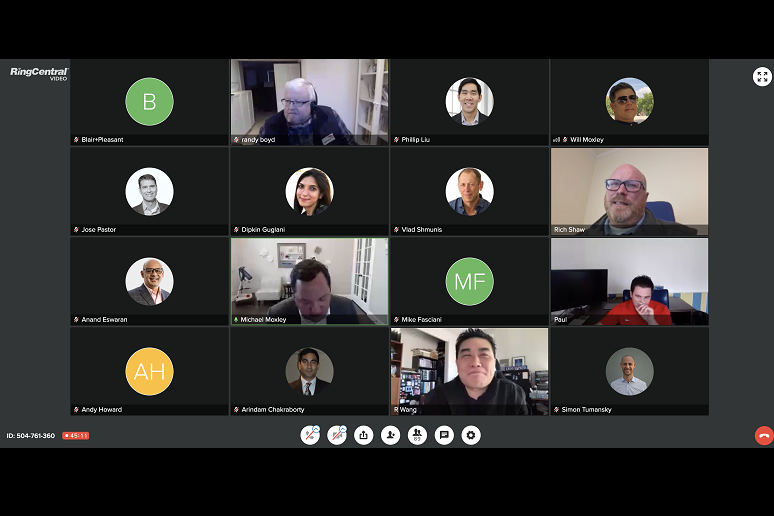 Image: Author
RingCentral this week made two big announcements: RingCentral Video (RCV), for integration into its UC solution, RingCentral Office (RCO), and Avaya Cloud Office (ACO) by RingCentral. Both are now generally available.
‘Zooming’ Away
RCV adds to the video solutions glut… Cisco Webex Meetings, Avaya Spaces, GoToMeeting, Zoom, which has long been RingCentral’s video partner, and many more. In its press release, RingCentral described its differentiator as being unified, fast, trusted, reliable, global, open, and smart. It certainly hit all the buzzwords, and this comes across as very “me too.” No offense intended to RingCentral, but every video vendor claims to be these things.
During an analyst briefing, I had the opportunity to use RCV and see how it worked. My take is that it’s a solid, albeit very basic, video offering — a “Skype merged with Zoom lite” aesthetic. The user interface is a black screen with some video tiles. People can use it to meet, and the product has persistent chat and recording capabilities, for a couple of advanced features. In fairness, Zoom has a similar plain look and feel, but people like it because it just works and works well. Time will tell if RCV will have the same kind of response.
An interesting aspect of RCV will be how it handles room systems. Zoom has done considerable work to make the Zoom Room experience a seamless one, and. RingCentral should be prioritizing work on the RCV-based room system it has in beta. This room system will be for customers that sign on for RCV.
Meantime, RingCentral Rooms, based on Zoom Rooms, has always been available and will continue to be supported, Anand Eswaran, president and COO of RingCentral, assured me. And, existing RCO customers will see no change in their room experience. At some point, if an existing RCO customer chooses to use the RCV product, they’ll have to update the video software running on tablets and computing devices, but they won’t need to change the hardware setup. It’s not clear on how well RCV will work with some of the newer devices, like Neat, that were specifically designed for Zoom.
The real differentiator for RCV is the tight integration with RCO. I think most industry watchers would agree that users want an integrated solution. Having to run RingCentral and Webex or even RingCentral and standalone Zoom adds to complexity and drives costs up, with the price of two licenses instead of one. The key is that RingCentral now has control over the video stack, and that’s fundamental for the product’s evolution. When Vonage moved to “One Vonage,” Vonage CEO Alan Masarek stressed how important it is to “own the stack.” RingCentral now has full control over the evolution of video and can enhance the product the way it wants to instead of having to wait for Zoom to make updates.
Curious what others thought about RCV, I talked to a couple of RingCentral resellers that have looked at the product. One described the product as “OK but glitchy,” and the said it was “not as smooth as Zoom.” But, both agreed RCV is fine as a 1.0 release. Likewise, they agreed that RingCentral is a fantastic, fast-moving engineering organization, and said they expect the company to work any glitches or bugs out of the product quickly. It’s certainly solid enough to sell as an embedded part of RCO, particularly to new customers that have never seen the Zoom-based RingCentral Meetings (RCM) option.
Adding Avaya
As for ACO, Avaya and RingCentral announced the product’s general availability (see related No Jitter post). That gives partners three options – RCO with RCV, RCO with Zoom-based RCM, and ACO. That certainly looks like alphabet soup, and begs the question of who sells what to who. Based on reseller feedback and an email exchange with Eswaran, below is how I see the market for each.
Some analysts and other industry insiders have shared with me that they feel RingCentral having its own video would create a war between the company and Zoom. In this “war,” RingCentral would replace Zoom video with its own software, and Zoom would use its phone business to attack RingCentral on the calling front. That might happen down the road, but for now, the two appear to be allies.
From my understanding, RingCentral reupped its contract with Zoom for the next three years. Zoom Phone doesn’t have the features to go head-to-head with RingCentral. Also, Zoom can’t just walk into an account and take over the phone business, as most RingCentral customers are on three-year contracts that are paid upfront annually. One of the resellers I chatted with told me that many customers are now opting for four- or five-year contracts, locking those customers down for a long time.
The video meeting space is highly competitive and fast-moving. I think RingCentral will find selling outside its base to be a huge mountain to climb. Cisco and Zoom have poured millions into R&D and have a bevy of new features coming out soon. RCV is strong enough to be included in the bundle, but it’s not ready to be the lead yet.