What’s Next for Alcatel-Lucent Enterprise?

Putting its transition plan into action, maturing business outcomes, and gaining momentum one customer win at a time

Alcatel-Lucent Enterprise (ALE) last week held the 2019 edition of its Connex analyst conference, playing off the company’s 100-year anniversary -- for in 1919, inventor Aaron Weil created the téléphone privé, or private telephone, and kicked off the Alcatel era. Since then, the company has been on a long, bumpy ride filled with ups and downs. Given ALE took the time to tout its history, I thought it was worth taking a quick look back to see how it got from there to where it is today.

As many No Jitter readers will of course remember, Alcatel-Lucent (ALU) was formed from the 2006 merger of Alcatel and Lucent -- with both vendors suffering from the telecom industry collapse in 2001. A quick look back at their revenues shows how dramatic the impact of the telecom bubble was on these two.

In 2000, Alcatel and Lucent had combined revenues of $70 billion. In 2001, that number fell to about $45 billion, continuing to drop over the years to $23 billion in 2006 when they struck the merger agreement with the aim of creating a single, larger company that could better compete in telecom. The merger was messy and largely a bust, prompting ALU to sell the enterprise division, ALE, to Chinese investment firm China Huaxin in October 2014. Shortly after that, Nokia absorbed the telecom group.

Today, ALE remains an independent organization that has had some ups but has mostly struggled to find its place in two highly competitive markets -- networking and communications. Revenue is at about $700 million -- roughly 40% from networking and 60% from unified communications. At the event, ALE told me it realized year-over-year growth of about 5%, consistent with last year. This was a pleasant surprise to me, as I thought ALE’s business was in decline.

Even with the slow growth, I wouldn’t call ALE a smashing success. I’d been expecting more out of the company. When Huaxin completed the acquisition in 2014, ALE’s CEO at the time, Michel Emelianoff, made a bold statement that the plan was to double the company’s annual revenue, at the time of $876 million, within five years with a substantial investment in global expansion.

Since that time, we’ve seen Mitel acquire several UC/telephony vendors, Extreme Networks roll up networking vendors, and Vonage consolidate a number of UCaaS vendors, amid a flurry of other M&A activity in the communications industry. That’s to say, there have been companies to buy, but ALE has largely stood still -- other than taking a majority stake in Austrian-based Sipwise in May 2018. This acquisition strengthens its UCaaS positioning, but I don’t think anyone would put it in the “game changing” category.

I don’t believe we’ll see Huaxin make a big acquisition any time soon, as Chinese investors tend to move slowly and be overly cautious. ALE will need to fuel its growth organically.

What I was hoping to learn at the analyst event is where the company goes from here. The keynote was interesting, with ALE providing a view into the world 100 years from now when robots are common in the workplace and the Internet of Things (IoT) has given rise to the “augmented employee” -- complete with connected glasses, belts, gloves, and covered with sensors. ALE’s position is that it will be at the center of this next great revolution. It this correct? Who knows, but it’s more vision than I’ve seen from the company in years.

Focusing in on the next five years instead of the next 100, the executives seemed content with the understanding that ALE is no longer the powerhouse it once was and competing with the likes of Cisco and Microsoft on a global scale just isn’t realistic. I believe the self-awareness is a significant step in accelerating growth; trying to be all things to all people had been spreading the company too thin. Instead ALE will focus on the following four key strategy pillars: 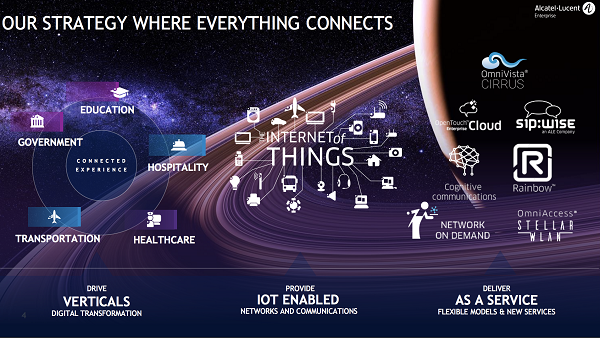 With these pillars in place, ALE is looking to sell business outcomes to the following five verticals: education, hospitality, government, healthcare, and transportation.

For example, in education it can deliver on a business outcome of “safe schools” based on a combination of ALE network gear and other technology that enables video surveillance and mass notifications using its Rainbow communications platform-as-a-service solution. In healthcare, ALE offers a “smart surgery” outcome comprising digital imaging, networking, and secure containers. Some of its solutions are more mature than others and some are still under development, but the concept of business outcomes is sound at ALE.

One of the biggest challenges ALE will face is scaling the solutions. If delivered by a systems integrator partner, such as Dimension Data, this should be no problem. But ALE relies heavily on the value-added reseller (VAR) channel that won’t have the necessary skills to deliver these.

ALE doesn’t have a large services business of its own to do the necessary pre- and post-sales support. This could create a gap not in technology but in supporting services, particularly in the area of customer success. It needs to work with its distributor partners to ensure they have the necessary services to help the VARs out. If it can do that, there’s no reason it can’t have success and continue to grow modestly and put itself back on the UC and networking maps within the targeted verticals.

Coming out of the analyst event I now see ALE as a company that’s got better focus and awareness of what it can and can’t deliver than it’s had in a long time. Its owner, Huaxin, appears to have patience and certainly deep enough pockets to fund this transition. Now it’s a matter of putting the plan into action, maturing the business outcomes, and gaining momentum one customer win at a time.

ALE won’t be all things to all people anytime soon… but it doesn’t need to be.