The 'Bridge to Possible,' Brought to You by Cisco

Cisco launches new brand campaign that ties together all aspects of the company, from its technology to its global impact.

Zeus Kerravala
This week appears to be brand week, as yesterday Avaya refreshed its look and feel, and today Cisco launched its new brand campaign out of its Partner Summit event.
Cisco has had many brand campaigns over the years, with the most recent ones being “There’s Never Been A Better Time…” and “The Network. Intuitive.” The new brand message, “The Bridge to Possible” is unique in that it’s the first one that ties together all aspects of Cisco, including its technology, business, brand, people, and the company’s purpose.

Previous tag lines focused on one or two of these but never really tied them together. The use of the word “bridge” is interesting, as Cisco’s original logo was inspired by the Golden Gate bridge -- hence the name Cisco (San FranCISCO). The goal of the campaign is to show that Cisco can be the bridge between where we are today and what’s possible. As part of the brand launch, Cisco provided a number of examples of how its technology is being used as a bridge:
In addition to customer examples, Cisco also details how its solutions are used to make the world a better place. Corporate social responsibility (CSR) was something that former CEO John Chambers was passionate about, but Chuck Robbins has taken it to the next level. Cisco’s CSR efforts are led by Tae Yoo, SVP of corporate affairs. I’ve been fortunate to meet with her several times, and making the globe a better place isn’t just a job for her – it’s a mission. Some examples include the bridges:
Regarding its people, Cisco will be making more of a concerted effort to showcase the difference makers inside the company. For example, Alphonsine Imaniraguha currently works as a network consulting engineer in Cisco’s advanced services organization. She was once an orphaned refugee from Rwanda and used that experience to create the “Rising Above the Storms” non-profit organization that advocates for orphans in developing countries and empowers at-risk youth through education.
Simplifying the Architecture
The new brand isn’t just about business-, world-, and people-changing stories. Along with it, Cisco is simplifying its brand architecture to highlight its business value and deliver better customer clarity and competitive strength. One of the big initiatives is a simplification of the portfolio. Many Cisco products currently have long technical names such as “UCS 480 ML M5 Rack Server.” These names actually do mean something. For example, UCS = Unified Computing Server. The 4 in 480 indicates 4 RU, and I believe the 8 is for an 8 GPU system. ML stands for machine learning. The rest, I have no idea. M5 might mean model 5… or it’s named after the M5 AI unit from Star Trek. The point is, one needs to be able to decipher code to understand many Cisco product names.
Cisco will be simplifying the portfolio and reducing the number of creative names from 165 to 16, the number of portfolio pillars from 13 to three, and the average pillars in a portfolio from six to four. The new naming convention is designed to be customer-focused rather than Cisco-centric, and this will make it easier for customers to buy products and for partner to sell them. This initiative includes better consistency of how analytics, software, security, and customer experience cuts across different product sets. The below graphic shows how this is structured. 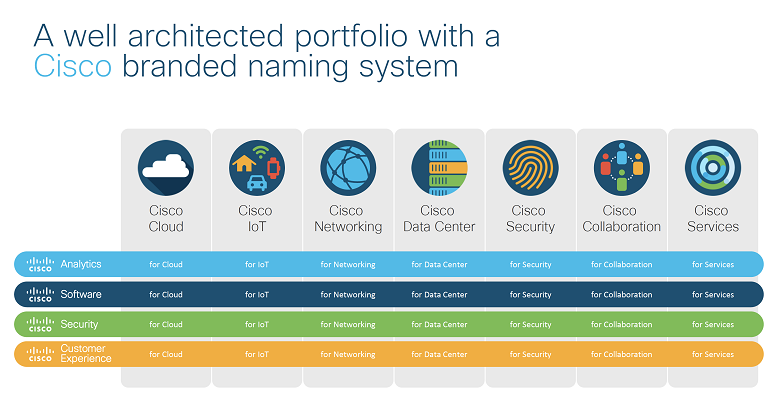 The revival of the bridge takes Cisco back to its roots, but the “Bridge to Possible” is forward-looking, in that it demonstrates what happens when smart, impassioned people are armed with innovative technology.