A trio of new capabilities caters to the mobile, deskless workers traditionally left out of digital transformation initiatives.

Beth Schultz
In this age of empowerment, firstline workers aren’t to be left out of the loop.
This has been a key theme of Microsoft’s for more than a year now (since the November 2017 debut of Microsoft 365 F1), reinforced today with the introduction of three Teams capabilities aimed at meeting the communications needs of deskless workers -- store managers, field technicians, flight attendants, waiters, and the like.
As Emma Williams, corporate vice president of Modern Workplace Verticals at Microsoft, pointed out to me in a recent conversation, these are the workers – close to three billion of them in the world – who work in roles that provide the first point of contact for a customer with a company and its brands. Yet, they’re underserved by enterprise tools today, she noted.
That’s a situation to which many corporate leaders haven’t given credence, said Williams, citing data from a Microsoft-commissioned Forrester survey of 300 business managers and 300 firstline workers that bears that out. In the September 2018 study, Forrester found that 77% of the firstline workers agreed or strongly agreed that technology is important to their roles, yet only 65% said they have the tools they need to be productive. Meanwhile, 85% of business managers surveyed said they believed firstline workers have the technology they need to be productive.
Oftentimes, the tools are available but oriented toward information workers with ready access from desktops. They’re not portable, and as a result limit the ability of firstline workers to communicate and collaborate among themselves – critically important for consistency of care within healthcare, for example. “What happened on the floor today? Who are the critical patients? What do I need to be aware?” A team collaboration app could be the perfect repository for nurses to leave and receive such information, at a glance -- if that app were catered toward firstline workers.
With today’s announcements, Microsoft intends to narrow the gap.
First, Microsoft now provides IT the ability to customize the Teams experience for deskless workers. IT administrators can assign access to Teams features based on an employee’s role. Workers who only need calendar and calling features get those, but not access to teams and channels, for example. IT can create its own policies for access or use a Microsoft-provided Firstline Worker configuration policy template, Williams wrote in a blog post on the Teams updates.
But a firstline worker’s mobile experience isn’t left to IT alone. Firstline workers themselves can further customize Teams by pinning the modules they most need to their navigation bars, Williams wrote. 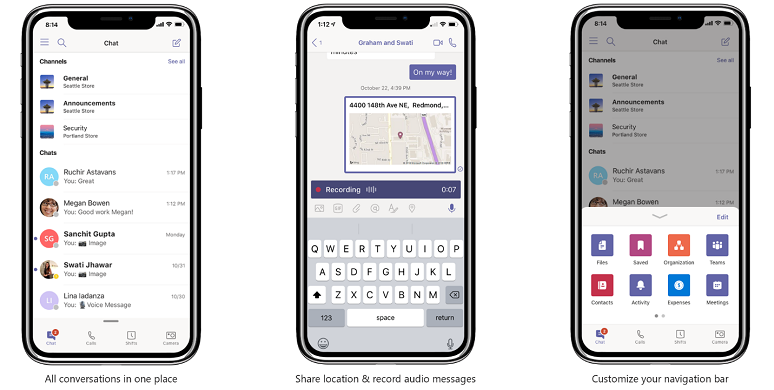 Second, Microsoft is developing APIs that allow integration of workforce management (WFM) software with Teams. Its first release, available for public preview this quarter, is the Graph API for Shifts, the schedule management tool in Teams. Other WFM integration targets aimed at addressing the operational requirements of a firstline workforce are payroll, benefits, and time and attendance, she wrote.

The third feature, called Praise, is meant to help keep firstline workers engaged and motivated, Williams said. While many firstline workers, such as retail associates, play key roles in representing their companies, turnover in this segment of the workforce can be high. “Taking steps to engage and recognize employees can go a long way to improving their satisfaction and reducing turnover,” she said.
With the Praise tool, managers and employees will have a simple way to recognize coworkers in Teams, for all to see. Praise is rolling out this quarter, Williams said.
As the Forrester research revealed, she added, “empowering firstline workers with modern tools and digitally transforming their experiences will be a key to growing employee satisfaction and the bottom line.”