Looking Back at MS Ignite 2021, What it Means for Teams

Augmented and virtual reality aren't the only capabilities changing the Microsoft Teams experience. 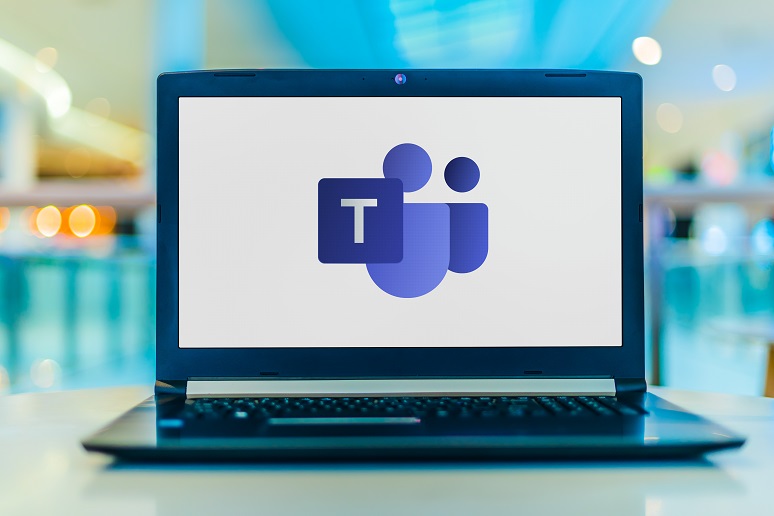 Image: monticellllo - stock.adobe.com
Earlier this month, Microsoft held its Ignite conference, virtually, which catered to IT implementers and decision-makers, developers, and data and security professionals. Detailed announcements from the over 300 Ignite sessions, spanning 48 hours, have been well covered on No Jitter. Below, I’ll explore the broad themes that emerged during the conference and how they relate to the future of Microsoft Teams.
Unpacking Satya Nadella’s Keynote
As expected, Microsoft CEO Satya Nadella began the conference with a keynote presentation. Nadella posited that "five attributes will drive the next generation of innovation from the cloud.” They are:
1. Ubiquitous and decentralized computing
What this means — Cloud and edge computing is the future.
What this means for Teams — Teams is cloud-first and only but expect to see more offline capabilities. An increasing number of Teams-specific devices like the recently announced intelligent speakers — which provide real-time transcription and can assign speaker attributions to the transcript — will combine edge processing to enhance Teams.
2. Sovereign data and ambient intelligence
What this means — Enterprises will be able to store data where they want it, and they’ll have smarter and more reactive meeting rooms.
What this means for Teams — Where data is stored when using Teams is complicated. To meet country-specific compliance or data residency regulations, multi-national organizations need better control of where their data is stored. Additional multi-geo capabilities for Teams were announced at Ignite, and I expect to see further improvements in data residency control moving forward.
Ambient intelligence refers to the environment, via sensors, responding to the needs of the people in it. With respect to Teams, expect to see future capabilities related to presence, identification (perhaps in room setting), and engagement. For example, enterprises can use meeting room cameras with people-counting technology to provide a capacity warning if the room becomes too crowded. Increased use of ambient intelligence requires trust in the technology, highlighted by Nadella’s fifth attribution below.
3. Empowered creators and communities everywhere
What this means — The use of low-code and no-code tools will become common.
What this means for Teams — New and enhanced Power Platform, data analysis, and visualization (PowerBI) tools will run natively within Teams. Increasingly the integrated Teams versions of these tools will provide a full-featured application; at present, some of the Power Platform capabilities are not directly available from within Teams.
4. Expanded economic opportunity for every member of the global workforce
What this means — This is a restatement of Microsoft’s mission “to empower every person and every organization on the planet to achieve more,” coupled with a focus on democratizing access to technology and access to learning about technology.
What this means for Teams — Most often the knowledge worker capabilities of Teams are highlighted, often because most analysts and reviewers are themselves knowledge workers. However, aligned with Microsoft’s broader vision, the capabilities and features of Teams supporting frontline (or first line) workers, educational institutions, as well as specific industries, such as healthcare, have and will continue to evolve, differentiate, and mature.
5. Trust by design
What this means — Security will remain important to Microsoft (and Teams).
What this means for Teams — Teams is and will continue to be built on the identity foundation provided by Azure Active Directory and on the compliance and eDiscovery capabilities native to Office 365. In some cases, this secure foundation may result in Teams being perceived as more complicated, especially for small organizations.
None of Nadella’s five attributes were surprising or unexpected. What was unexpected was Nadella turning the keynote over to Alex Kipman, technical fellow, AI & mixed reality, for Microsoft. Kipman then spent the balance of the keynote discussing mixed, augmented, and virtual reality while simultaneously delivering the keynote in virtual reality via AltspaceVR (acquired by Microsoft in late 2017). MS Ignite was the first major tech company to host a keynote presentation fully in virtual reality.
Microsoft has been demonstrating augmented and virtual reality capabilities integrated with Teams since Build 2018. However, since Microsoft allocated most of the 2021 Ignite keynote to mixed reality, it might signal that Teams integration with these capabilities will be generally available in the midterm, not the long term. The new webinar capability announced for Teams provides a strong foundation to augment with VR-conference capabilities.
Cracking Open the Book of News
Given the number of announcements made at each Ignite, Microsoft publishes a guide to key news items being announced called the Book of News. Each year, I analyze the topics covered in the Book of News. 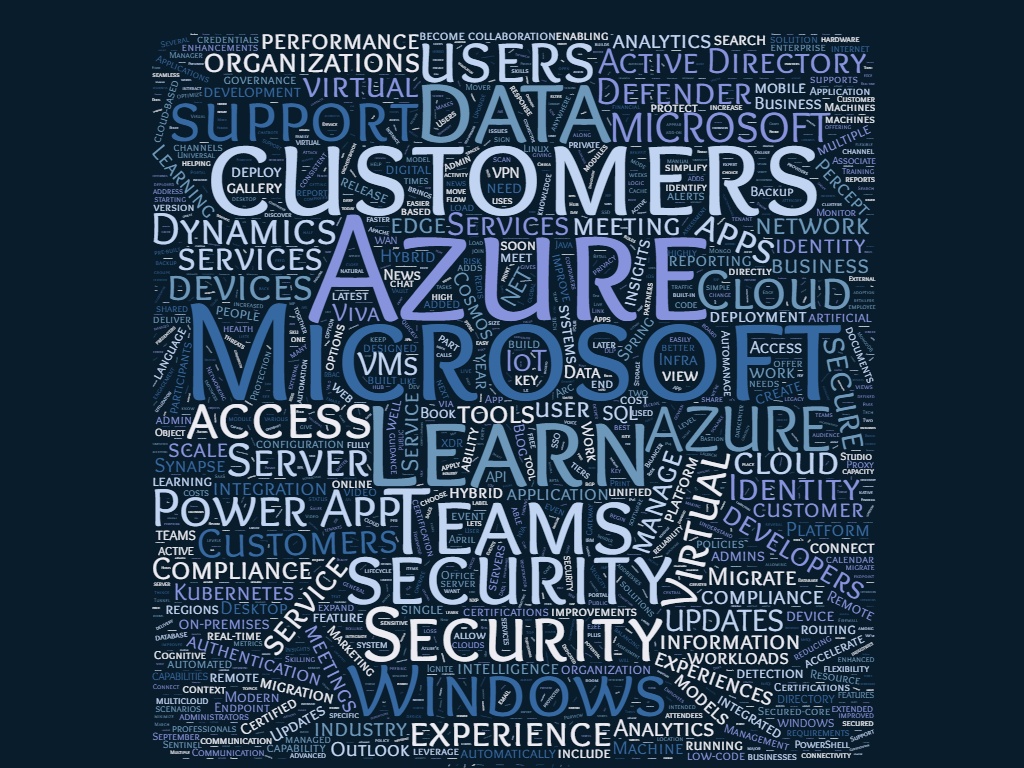 Tallying key concepts and product references illuminates areas Microsoft is concentrating on and investing development and marketing efforts in:

Given Azure has become an over-arching brand for almost all cloud services, it is unsurprisingly to see this term garner the most mentions, by far.
In the first week of this year, during an interview with the Financial Times, Nadella suggested that Teams could become the “digital platform as significant as the Internet browser,” and he boldly declared 2021 as the “year of Microsoft Teams.” Consistent with this, Team’s announcements and Ignite sessions related to all aspects of Teams were plentiful at this year’s ignite. Many organizations that rapidly turned to Teams to enable remote workers are now looking to optimize and consolidate capabilities, often investigating Teams as their core voice system, including PSTN calling.
Microsoft continues to develop and expand Azure Cognitive Services, which is the family of AI services and tools developers can use to integrate AI in applications and workflows. These services are also consumed by Office 365 applications, including Teams. AI powers Teams real-time captioning, its background blurring and replacement for video, including the unique Together mode, chat translation, and more. Expect enhanced AI capabilities in Teams to provide improved virtual meeting assistants, eye-gaze correction, more powerful voice-controlled, touchless meeting options along with directed topics, and learning discussed below.
Microsoft Viva, Microsoft’s employee experience platform, reconfirms the centrality of Teams as the primary application, where employees can access information and capabilities. Viva Insights, Topics, and Learning are all surfaced first through a Teams application or integration. Viva Connections is surface through Teams and the Yammer community app in Teams.
While most organizations initially focused on Teams as a collaboration platform, and increasingly, many now are looking to add complete voice and PSTN capabilities into Teams, the superpower of Teams has long been its ability to automate and accelerate repeatable business processes. Power Platform and the low-code tools the platform encompasses allow citizen developers to create bots, virtual agents, visualizations, and line of business applications. As the hub where work gets done, or as the glue that holds the digital work environment together, Teams is uniquely improved with every Power Platform enhancement. Expect wider awareness and adoption of automation within Teams.
While mixed reality had few mentions, during the keynote, it received major airtime and an impressive real-world demonstration.
The few references to SharePoint and the absence of any mention of Yammer are both of note. Both continue to be relevant but are being subsumed by Teams as the primary collaboration interface that integrates, surfaces, and automates much of the capabilities from these and other supporting Office 365 applications.
Final Thoughts: Teams Continues to Deliver
As Teams continues to attract millions of new users, Microsoft continues to invest in and evolve its primary collaboration platform. The announcements at Microsoft’s Ignite conference are likely to encourage and promote further growth, even with increased direct competition from Zoom and the expected renewed competition from Slack, supported by new parent-company Salesforce.
Teams continues to deliver new features, in part, to keep up with the features and usability from competitors, and in part based on research and customer feedback, especially via the Teams User Voice site. In the short term, new features announced at Microsoft Ignite 2021 are exciting. In the longer term, the potential for Teams to play a central role as the hub for mixed reality is incredibly exciting. However, many IT professionals today struggle in helping users discover and best utilize the existing capabilities of Teams.