Without short development times for M2M applications, the Internet of Things will be slower to develop. Here are a few ways that the industry is attacking the challenge.

Corporate IT might look at M2M and see it as just another data communications app, and in a way, they would be right. But they may not realize that the right place to start is on the design of an entire system: Developers should choose a network service provider and the service delivery platform before considering the device that will run the app. And going down the do-it-yourself device route is problematic.

There is a dark side of the M2M moon. If the design process starts with the device, which is the way most of today's apps began, then unexpected issues will surface. Devices have to be certified by the carriers, and in the U.S. that can take months.

Furthermore, the bill for each device model could run somewhere between $40k and 100k. In Europe, cellular certification times are much shorter and costs much lower, although the process is the same: RF interference coming from the antenna and communication protocols are the carriers' key concerns. It would seem that the MNOs (mobile network operators) are getting in the way of stateside progress and milking a high-yield cash cow, but let's park that issue, although it's important.

Starting the design at the wireless module level isn't easy: specialist knowledge and experience are needed, and if they are lacking, then the module vendor should provide a full set of support services, which is what one such company, Telit, does. They can also facilitate the certification process, but there is an alternative, relatively new way of getting M2M apps out the door and to the market in much shorter time frames and at lower costs.

Open Boxes Open Up the Market
Newcomers to an ICT sector are unencumbered by legacy baggage, and, therefore, they can come up with new ideas and innovative solutions. ClearConnex is one of those companies, and its offering is based on a concept called "open boxes."

These are certified devices into which companies can load their application software. When you put a module on a board, add peripheral circuitry (e.g. a microprocessor) and an antenna, you've got a modem that can be connected to a cellular network. Put the whole thing in a housing, and you've got a device. I'm spelling it out here because the M2M industry isn't consistent in the way these terms are used.

The key benefit of the open box concept is that there is no need to do any hardware design: RF interference does not need to be measured. So how does it work?

Let's keep things simple, but not too simple. ClearConnex has created licensable hardware and software platforms, which comprise the basic building blocks that all M2M applications need. In a nutshell, they bypass the usual way of creating apps from scratch: They eliminate the need to reinvent the wheel. There's a wireless module library, ClearLink, which provides an API that developers use to build apps without needing to know anything about the ins and outs of wireless modules. They can be created using Java, i.e. just like any other data app.

The library supports more than 60 wireless modules coming from eight leading vendors and there's an operating system, ClearOS, which enables application development without needing the embedded device. Moreover, it supports mainstream operating systems like Windows and Linux, and for an encore, it future-proofs the app. There's no lock-in to any OS, processor or development environment.

Given the complexity of bringing an M2M app from concept to deployment (i.e. the need to integrate wireless modems, application processors, low-power microcontrollers, hardware interfaces, operating systems, application frameworks, cloud connectivity, etc.) the open box concept sounds almost too good to be true. But the company is gaining significant traction and indicating that big-name announcements will come in the second half of 2014.

Unlocking M2M's Market Potential
Established vendor Sierra Wireless has recognized the need to lower the technical barriers that are preventing M2M applications from evolving as rapidly as they otherwise might. These barriers not only slow down the concept-to-deployment process, but they also result in enterprises spending the majority of their engineering resources on performing basic system integration tasks instead of on the area where they can provide the most value, i.e. the application. It's the same message as that of ClearConnex, and it indicates that a significant trend is underway.

Sierra's offer is relatively new and facilitates integration from the device through to the cloud. It includes a service delivery platform and an application development environment. It is based on a new generation of pre-integrated multicore solutions that provide an entire M2M ecosystem on a module. The combined result, according to Sierra, is a powerful, new way to build M2M solutions more quickly, efficiently and inexpensively, and this should enable enterprises to apply M2M innovation to a broader set of applications and business challenges.

The deliverable is basically the same as that of ClearConnex and Eurotech (to be discussed shortly): It simplifies the process of developing and deploying new M2M applications. However, the fact that it comes from a leading module vendor is significant since it indicates that the company has abandoned the traditional, time-consuming design process of starting with the device.

Sierra has also joined forces with ARM, the world's leading supplier of semiconductor intellectual property. Around 800 processor licenses have been sold to more than 250 companies and over 20 billion ARM-based chips have been shipped, so they're a good partner to have on your side. This is particularly true when the devices have to be powered by batteries or solar panels. ARM is supporting this effort by providing the extremely energy-efficient ARM Cortex-M series of processors as part of its multicore solution

Challenges Recede; Trends Emerge
Open boxes and providing an entire ecosystem on a module indicate that the challenges are beginning to recede, and they are also complemented by a number of important trends in the M2M sector. These include open operating systems designed for M2M applications, large sets of software libraries, and easy-to-use integrated development environments.

The large developer community has had its eyes on the M2M sector for some time, but resources and guidance had also been hard to come by. That situation has changed, and now there is a large, growing community that is providing tools, knowledge, and open-source integrated development environments. ARM, for example, is bringing its global community of developers and partners to support these developments.

Different Approach; Same Objective
Eurotech is another established vendor that has focused on the need to dismantle technology barriers in order to minimize time to market. The company cites concept-to-deployment times between six and 24 months using the traditional approach, versus two to three months using a combination of the company's multi-service gateways (MSGs) concept and a cloud-based M2M Integration Platform. This enables seamless integration of devices in the field with enterprise IT applications.

The basic concept is very simple. As illustrated below, sensors and devices connect to the gateway using a mix of RF or wireline interfaces and the certified gateway connects to the communications infrastructure. Therefore, as in the two previous scenarios, this concept bypasses integration issues and allows companies to focus on their core competence, which in this example would be the development and marketing of eHealth devices.

Eurotech's offer includes a range of gateways that target six vertical markets. They're based on Intel Atom or ARM processors and they deliver the following: communications, computational power, a middleware application framework and an M2M platform.

The platform is IT centric and cloud based. It acts as an Enterprise Service Bus for machines, which allows easy integration of different devices, systems and applications. Everything is integrated: All that's needed is for the developer to add the application or specific business logic on the device, which can be written in Java. After that the solution can be deployed and managed using the Integration Platform. 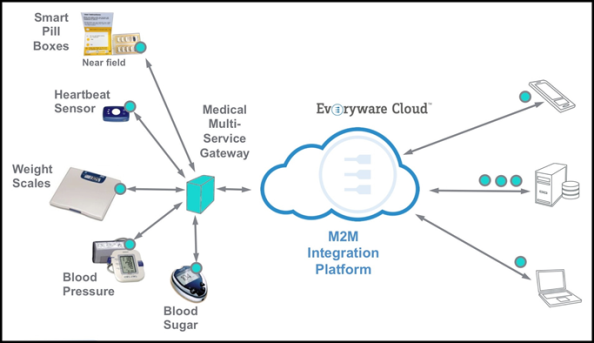 Medical and Healthcare is one of the six verticals. The others are: Industry and Commercial; Logistics and Networking; Security and Surveillance; Defense and Aerospace; and Transport and Mobility.

Although the requirements of these verticals are different, the gateways are created from a portfolio of hardware and software modules. This facilitates the creation of gateways for new verticals as well as a range of connectivity options that link distributed devices with business applications.

The company's offer also includes an extensive portfolio of products. For example, for Transportation and Surveillance applications there are various rugged systems designed for accurate location tracking, passenger counting, real-time vehicle tracking and specialized surveillance systems. And there is support for the use of different mainstream operating systems as the basis for embedded applications.

Conclusions
Although the M2M industry has been very successful and is experiencing double-digit growth, the complex, multi-vendor value chain, along with certification issues in the U.S., have served as barriers to even more remarkable growth. This article has highlighted three solutions that address the problem, and, in doing so, allow development costs and deployment times to be radically reduced. However, the really big benefit comes from the fact that they allow application developers to focus on their core competence--creating innovative business apps--and forget about the various integration issues.

Moreover, ClearConnex underlines the fact that there is no need to be involved in any aspect of hardware design: applications can be developed in the same way as they are for PCs, tablets and smartphones. Maybe there will even be an online store in future.

It's clear that M2M is set to make a bigger, extended entry into ICT environments. And without this kind of progress, an Internet of Things (IoT) comprising zillions of devices isn't going to fly. And without short development times, we would need more developers--many millions more.