This morning, Siemens Enterprise publicly announced Project Ansible, which the company had previewed at an analyst conference last month in Denver. Ansible is the company's next generation communications platform and is designed to increase productivity and enhance collaboration through a streamlined, real-time interface. The vision behind Ansible is similar to the vision I outlined in my January 2013 report, "Visual Conversations Redefine Enterprise Collaboration," which can be found on the front page of http://www.zkresearch.com.

The main thesis of my report--and the Siemens Enterprise vision--is that the collaborative process is broken today because the tools people use to collaborate are disjointed and not unified at all (despite falling under the umbrella of "unified communications").

Consider a typical virtual meeting. It's common to set up a web-conferencing application, an audio bridge line and video conferencing units. Then, when in the session, some users might chat with one another or perhaps even use a desktop share. We've all been in sessions like this and while we may be communicating, it's far from unified.

Ansible can almost be thought of as "unified" unified communications, as it brings together all collaborative applications under a flexible "canvas" where each user can customize what's on their screen. The software aggregates any application including traditional communications tools, social software, business applications and analytic tools. The graphic below really doesn't do the application justice, as it shows only a single snapshot. From what I've seen, Ansible provides a highly flexible and customizable collaboration tool where workers have access to all of the data and tools they might need. 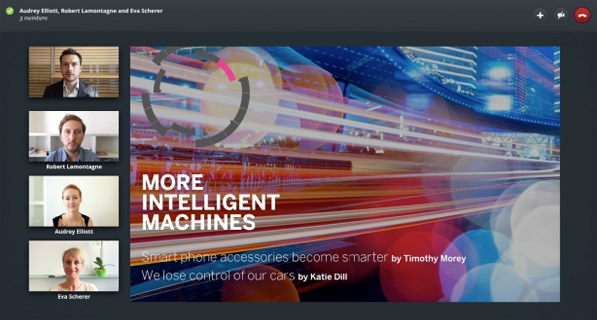 An Ansible session could start out as simple as two people chatting with one another and then easily flip the session to video. Then if other workers need to be brought in, they can be "dragged" into the session. When it's time to share a file, one of the workers can make an application part of the same session in the same interface (so they don't have to launch a whole separate web share). If it's necessary to bring another application in, then simply drag that in.

Project Ansible was built with the following core tenets in mind:

* Personalized and useable interface. This may seem like an obvious requirement but most UC systems require users to alter the way they work in order to adapt to the UC tools. The fact is that most workers use some combination of e-mail, chat, video and voice in different ways. Ansible does a great job of allowing workers to weave these together while still keeping the front end easy to use. Building products that are easy to use is actually very difficult, and Siemens has created a well-thought-out interface that removes any "user-based" integration. Ansible also runs across mobile devices, to allow workers to take the experience with them.

* Persistent spaces. The software takes meetings and makes them persistent, as it creates "spaces" where files, voice transcripts, chat conversations and other communications are recorded and archived. This can actually make virtual meetings better than in-person ones, as workers can have access to the content after.

* Search capabilities. Ansible enables search within the communications and collaboration applications, to include searching text messages, social tools, voice mails and other content. There's a feature called "Thought Trails," where users will have access to content they need by conversation or topic.

* Rich, flexible canvas. In some ways, the rich canvas is the key to user adoption. While search and personalization offer some key capabilities that add significant value, the single pane of glass creates the wow factor to drive user adoption.

* Application integration. Project Ansible was architected to allow users to work the way they want to work by tying into business process. When Ansible is launched, it will have connectors for many mainstream applications such as salesforce.com, Google and social media. Siemens will release a set of Ansible APIs and SDKs to allow in-house developers and ISVs to integrate custom or vertically-specific applications. For example, a financial services firm may want something like Reuters integrated into the application, where a law firm would want LexisNexis.

I also like the fact that Ansible was built on open standards, including the use of WebRTC for embedding voice and video into a web browser. This should make it easier for Siemens Enterprise to create greater interest from third-party developers. The canvas and the custom usability will get Ansible in the door, but the application integration can make the platform a key enabler to improving business processes, thereby improving the stickiness and business relevance of it.

As a company, Siemens Enterprise has certainly had its struggles over the past decade, but Ansible should give it a shot in the arm and a strong platform to take to market.