What’s new on the product and partnership front from Avaya, Verizon, Edify Labs, West, and Cyara

Beth Schultz
Contact center and customer experience factored heavily, but not exclusively, in this week’s No Jitter Roll picks.
Avaya Tightens Ties to Afiniti
Since Avaya introduced its A.I.Connect developer program in October 2017 and announced Afiniti as one of its initial participants, it’s been steadily deepening its relationship with this partner, which provides behavioral-based predictive routing.
To that end, Avaya earlier this week said it has expanded its integration with Afiniti, building on the strategic partnership announced in April 2018 to create an “AI edition” of Avaya Aura Contact Center Elite, as UC analyst Brent Kelly, of KelCor, wrote for No Jitter at the time. Natively integrated, the Afiniti software is able to modify queues, change the order of queued calls, and change which agents should receive calls, he wrote.
Now Avaya is extending the integration with its contact center platform, rebranded in January as IX Contact Center, in order to apply Afiniti’s behavioral pairing algorithm to outbound campaigns and digital customer notifications, the company said in a press release. Depending on customer need, the AI-enhanced outreach could apply to a wide variety of engagements, including welcome and customer onboarding messages; telemarketing and fundraising; enrollments and renewals; order and shipment status; account alerts and fraud management; and SMS, email, or phone-based surveys.
This deeper integration should allow companies using Avaya’s contact center platform to achieve measurable benefits such as cost reduction, higher conversions, better retention, or more first call resolutions, Kelly said in a prepared statement.
Verizon ‘Zooms’ into Video Service
Via a pairing announced yesterday, Verizon business customers now have access to the cloud-delivered, video-first UC platform from Zoom Video Communications.
Specifically, business customers will be able to use call-in toll/toll-free or call-me numbers for more than 50 countries, Verizon said. In addition, they’ll be able to take advantage of the full video experience of Zoom meetings using their Verizon Wireless phones or Verizon VoIP service, or use the VoIP service to dial-in to just the audio portion, for no additional charge, Verizon said. Verizon will manage the service, and provide training, guidance on user adoption, and technical support, as needed.
The Verizon-Zoom combo should be on the “short list” for businesses and organizations investigating their options for cloud-based video collaboration solutions, said Amy Lind, an IDC research manager, in a prepared statement. In particular, she called out Verizon’s call quality and onboarding support for bringing “additional robustness to Zoom’s technology.”
The Zoom solution is available globally for Verizon business customers.
Edify Labs Takes Unified Platform GA
Edify Labs, a cloud startup that made its debut in March at Enterprise Connect 2019, this week announced general availability of its unified communications platform, called Huddle.
With Huddle, Edify is pitching improved customer experience by virtue of enabling contact center agents to collaborate seamlessly with each other and internal subject matter experts during customer interactions. In addition, the platform allows movement from one channel to the next – “from social media to chat to voice to text to video and back again,” the company said -- within an interaction.
Artificial intelligence comes into play, too, via “Hammond,” an internally built AI engine that uses natural language understanding and sentiment analysis to route conversations to live agents by request or as needed, Edify said. 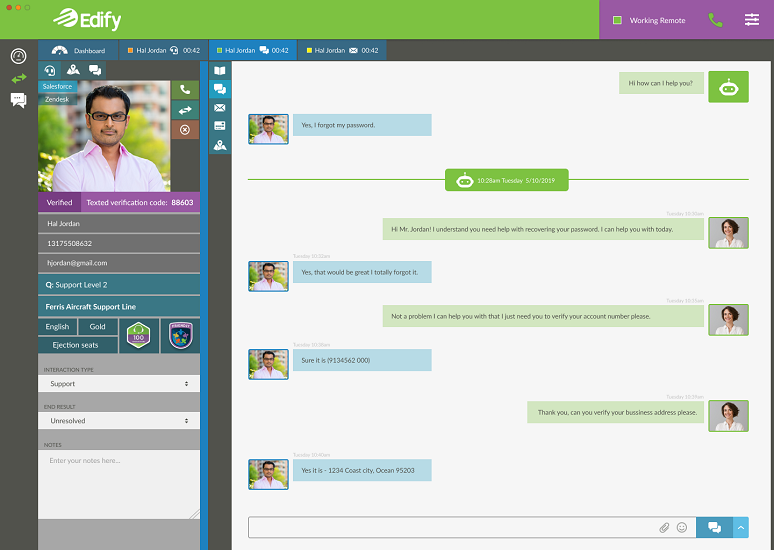 Additional platform features and functionality include:
Huddle is available in 12 data regions, split between the Amazon and Google clouds – and Edify provides a 100% uptime service-level agreement (SLA). Should any downtime occur, Edify’s SLA stipulates that it will “pay out 10x what the customer paid” during any such period, the company said.
Pricing varies based on which components a company uses. For example, at $6 per user per day, a company gets the omnichannel business product; adding machine learning “for extra smarts” ups the daily per-user rate to $7, the company said. Huddle Basic, for UC, costs $10 per user per month. Of note, however, Edify offers the first five users at no cost – forever. (And various usage fees apply to Huddle APIs.)
West Pushes Flowroute’s Reach
With an eye on facilitating international business, West this week gave notice that phone numbers from communications API provider Flowroute, which it acquired last August, are now available in more than 160 countries.
Large enterprises and call center operators, as well as developers and communication services providers, will now have access to a greater volume and variety of inbound local or toll-free numbers, West said. As such, they should be able to provision numbers and extend their reach rapidly, without incurring substantial expansion costs, the company said.
“For global enterprises, communications have no borders. The ability to easily connect and collaborate with colleagues, partners and customers on an international level is an imperative,” remarked Chris Malinowski, president of West, in a prepared statement.
Cyara Targets Amazon Connect Migrations
Cyara, which bills itself as a “customer experience assurance” provider, this week launched the Cyara Accelerator for Amazon Connect, the first platform-specific version of the cloud migration acceleration solution it introduced earlier this month.
With this acceleration solution for Amazon Connect, Cyara said its goal is to help companies get their contact centers up and running twice as fast as they’d otherwise be able to do. Its five-step process comprises:
Accelerator for Amazon Connect is currently available in a free trial to qualified customers. Trial participants will be able to convert to a monthly subscription at the trial’s end, or whenever they’ve exceeded capacity, the company said.

A look at the latest product news from Oracle, BlueJeans, Deepgram, Bose, and Zoom

A slew of changes around Zoom’s security and user experience aim to give users and admins greater control over their solution and data.

See All in Product News »