Polycom and the Rorschach Test

Does the company's financial picture look like a disaster unfolding, or a rebound beginning? It depends on who's looking at it.

The Rorschach test is one in which subjects' perceptions of inkblots are analyzed in a psychological interpretation, sometimes with complex algorithm enhancements as well. The test is often employed in diagnosing underlying thought disorders and in differentiating psychotic from non-psychotic thinking.

It has occurred to me that Polycom's P&L could be viewed as a Rorschach test where numbers rather than inkblots are subject to interpretation. And maybe like the traditional test, interpreting Polycom's patterns is also an indicator of the psychological state of the reader.

The facts are pretty simple. Polycom reported second quarter 2014 revenues of $332 million, somewhat below Wall Street expectations (whatever that means). However, increased profitability from revenue mix shifts and cost cuts and a lower share count all assisted in a non-GAAP earnings per share of 21 cents, higher than expectations. A summary of Q2 results: 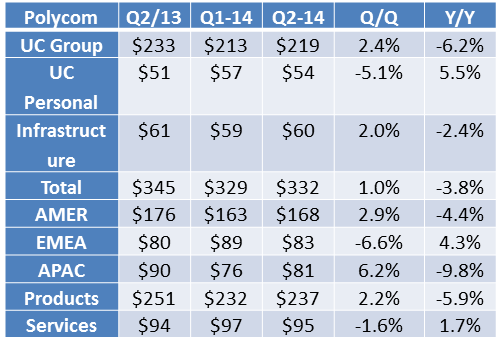 A few bullet points not always obvious from the first level of numbers.

• While UC Group (audio and video products for conference rooms) is down $14M from Q2-2013, Polycom claimed the business would have been flat if not for the loss of the Cisco OEM speakerphone business. Gives you an idea of how big a customer Cisco was for Polycom.

• Similarly, without the $14M of Cisco business, the Americas regions was down only $8M. So it would have been up.

• The "UC personal" category is mainly VoIP phones, and Lync phones in particular. While the annual growth rate of +5.5% is nothing to sneer at, it looks somewhat different when compared with the growth rates of the recent past. Has the bubble burst here?

• Polycom breaks its revenues out into product and services categories. The Rorschach patterns here are very different. 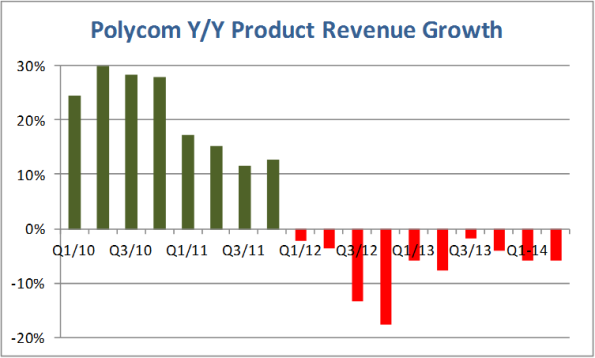 Most people would think of Polycom as a products company. Hence the trail of negative growth quarters might be pretty unsettling.

• However, services (28.6% of total revenues) is still a growth area for the company; and while most of the services revenue today is from glamour-free maintenance, the company is pushing into sexier areas like VCaaS (video conferencing as a service) and video managed services. The services area financials have been through some heady times, especially when Polycom acquired the Halo business from HP. More recently, growth has slowed significantly. Can we expect services growth if product growth is absent? 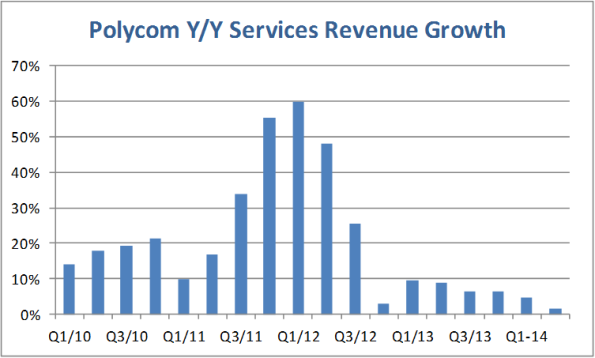 • The company generated $62M in cash flow during the quarter and ended with $640M in cash and investments, of which $234M is located onshore. No need for any panic button here.

• About a year ago, Polycom announced a 4% reduction of the global workforce and the closing of several offices and facilities along with other changes, with the aim of lowering costs. Shortly after joining Polycom six months ago, new CEO Peter Leav announced additional moves to streamline operations and improve product margins. These are all helping the company maintain or even improve profitability even without revenue growth.

Rorschach participant #1
Andrew: "I see a long-term disaster in the making here. You can't cut your way to growth. And while the room video conferencing systems market isn't going away any time soon, there is definitely a deflationary trend here fueled by the move to software and cloud-based services. Partnering with Microsoft is always playing with fire, and Polycom's desktop phone and Lync video story has me frightened. Without growth, management is doing the right thing--which is to aim at being a cash cow."

Rorschach participant #2
Andrew: "This picture looks like a roller coaster to me, or a rebound unfolding. The Cisco story is water over the dam and Polycom appears to be recovering nicely from the loss of that business. Yes, the current market does seem to be in structural decline, but Polycom is a leader in video and video is going to be everywhere. No other company has the depth of video talent, the broad product line, an established channel partner network, and overall focus on collaboration to match that of Polycom. There is a huge opportunity unfolding here, and nobody is better positioned to capitalize on it. The current focus on cost cutting is long overdue--so get over it."

What do you see in these charts and figures?