The missing piece in both networking's revolutionary and evolutionary stories is the thing that started it all -- the Internet.

Networking, and its transformation, is more than just technology. Broadband Internet came along during an unfortunate shift in the politics of networking. In the '80s and '90s we were moving from a global vision of communications as a regulated monopoly or even a government agency to one of a free market. The Internet exploded on the scene during the shift, at a time when subtle distinctions between "communication" and "information" services made an enormous difference.

The operators were left on the communications side, and what we call "over the top," or OTT, players took what turned out to be the new age of services, the information services. What operators want now is a combination of a lower base cost for their commodity communications services, and a way to participate in that dazzling information-services future. The current software-defined networking (SDN) and network functions virtualization (NFV) revolutions are credible to the extent they can address this dualistic goal. 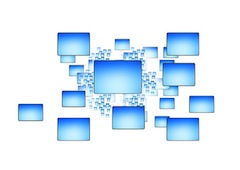 The challenge for revolutionary change is revolutionary benefits. Both SDN and NFV are really about service automation. Neither SDN nor NFV proponents had paid much attention to operations in their early work, and little has changed since. As a result, the whole basis for a revolutionary solution to cost control and revenue augmentation has been compromised. There's some recognition of this problem now, but because the operators say that their revenue- and cost-per-bit curves will cross over in 2017, they may not have time to solve the problem.

Well, not by a revolution. As it happens, we have a second possible approach.

Virtualizing the Physical Layer
For the last five years, without much fanfare, there's been an evolution in the role of Layer 1 (L1) -- the physical layer where optics and dumb tunnels or pipes live -- technology in the old OSI model. Agile physical media seems to be a contradiction in terms, but what we're really doing is virtualizing the physical layer. Since, in the OSI model, the physical layer's limitations in scope and cost efficiency is what created the need for higher-layer aggregation and connectivity, making Layer 1 more capable lets you simplify the higher layers.

With virtual-L1 technology, you can separate customer networks and services below the Ethernet (L2) or IP (L3) layers. That would seem to drive us toward a bunch of expensive and inefficient service and customer silos -- except for another factor, which is "virtual routing."

Virtual routing isn't really the same as virtual functions, though the concepts could overlap. A virtual router is really router software that can be hosted somewhere. The notion is already gaining popularity in the cloud data center and at the network edge, but it's not rolled out into the broad router market because servers are limited in performance and availability relative to special-purpose routers. But if we can groom services and customers at Layer 1, we don't have to route great masses of customers' traffic for most services. For the L1-segmented service/customer future, virtual routers are fine.

Most of the cost and operations complexity of today's networks come at Layers 2 and 3. The evolution of agile optics and virtual physical layers has offered operators a chance to simplify those parts of their networks without doing anything revolutionary at all -- no SDN or NFV. I think you could argue that AT&T's strategy to virtualize 80% of its network by 2020 is more a reflection of this agile-L1 evolutionary approach than a commitment to SDN or NFV.

Building the Information Utility
The missing piece in both the revolutionary and evolutionary stories is the thing that started it all -- the Internet. It's possible to envision an Internet made up of discrete services on discrete networks that share a common address space and are united at the point of user connection, but it's not clear how we could get there gracefully through either network revolution or evolution. We may need a revolution of a different sort, one that's kind of "evolutionary" in that it demands a solution to an old problem to create a new service.

As a business, the Internet of Things is a lot like the phone system in one sense, which is that it's going to cost an arm and a leg to build it. Think of the number of sensors that will have to be deployed, the number of applications that will have to be written. IoT isn't really about "the Internet" at all, but about a new information utility that supplements the Internet, a utility of contextual information. We had to offer companies public utility protection to build the phone system, and unless regulators do that again with IoT the companies most likely to build it are the companies that did the phone system in the first place -- the network operators or Internet service providers or telcos. You need to be cash-flow rich, tolerate low ROIs, and build for the long haul. Who else does that these days?

Ten years from now, we'll say that IoT changed everything about networking, but not in the way people expect. For my last blog in this topic, I'll share what IoT will bring about in 2025, in the service, technology, and business domains. (For my previous posts in this series, see: Commoditization: Sometimes Less Really Is Less and How 2 M&A Drivers Shape Networking Overall.