It's been 14 months since I last wrote about Mitel's contact center portfolio, which at the time comprised technology from PrairieFyre, acquired in June 2013; Aastra, acquired in January 2014; and Oaisys, acquired in March 2014. Mitel had ambitious plans to consolidate its contact center offerings into a single application able to support any of the call control platforms in the company's portfolio, admittedly a multiyear process.

Much has changed in the intervening months, perhaps the most significant being a renewed focus on contact center by Mitel's senior management. This includes Ron Wellard, former chief products and solutions officer who at the turn of the year became chief strategy officer, and Wes Durow, an April 2015 hire as CMO. With Mitel veteran Graham Bevington taking the reins of the Enterprise Division, I expect the customer contact center experience will remain a high priority.

Mitel's enterprise telephony and unified communications businesses have been running on all cylinders, culminating in Gartner magic quadrant leader status in both categories in 2015. I believe Mitel understands that to compete with fellow UC and telephony leaders Avaya and Cisco in the mid-market and enterprise it had to up its contact center game. 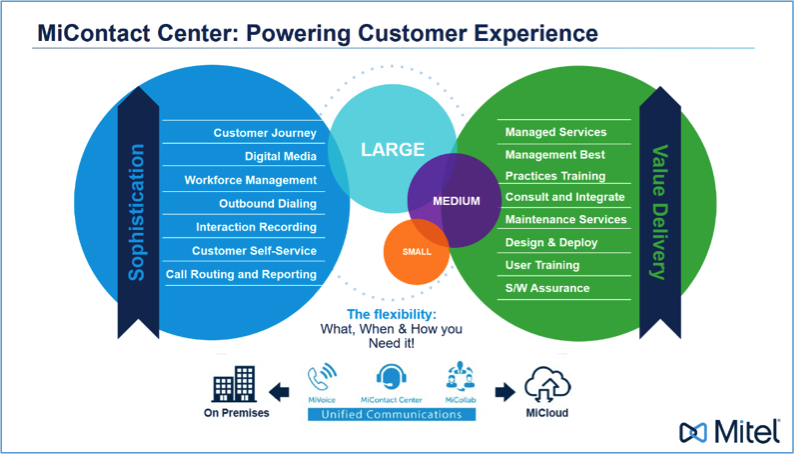 8.0 also introduces full support for native SMS interactions. Until this release, MiContact handled SMS interactions via the email channel, which increased the administrative burden on the contact center to manage which queue was doing what. The latest release treats SMS as a standalone media channel, supporting inbound and outbound live assistance. Also, contact centers can provision SMS self-service with seamless escalation to live assistance.

MiContact 8.0 also supports the beta release of a new Web-based agent desktop. The Ignite desktop, based on the desktop built to support Microsoft Lync/Skype for Business, is available now for beta users and is planned for general availability with Release 8.1 later in 2016. I'm particularly excited by the customer journey elements being added to the Ignite desktop, which will be on display at Mitel's booth at Enterprise Connect 2016, taking place March 7 to 10 in Orlando, Fla.

The latest news from CLIPr and Neustar