Can You Hear Me? Addressing a Big Meeting Pain Point

During an Enterprise Connect roundtable, six industry execs mulled one of the pesky problems of the virtual meeting experience — resource control. 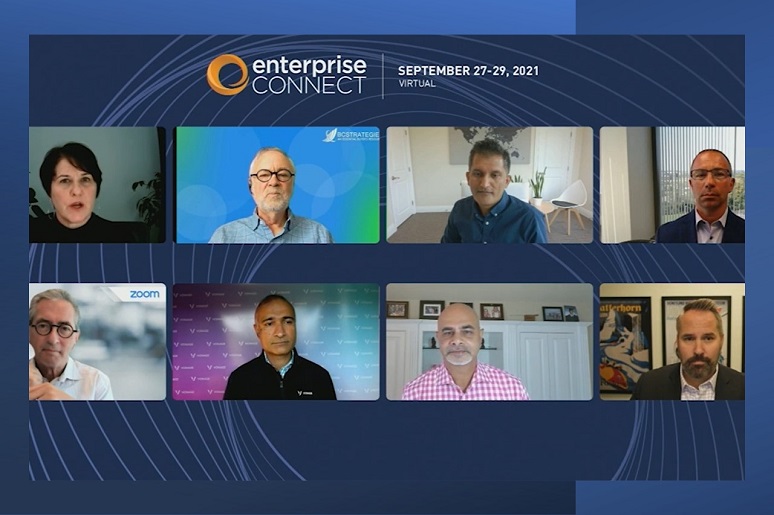 If your users hop between collaborative meeting platforms as they go about their daily work, chances are you’ve heard a gripe or two about difficult join experiences. Audio, working just fine in one meeting, for example, is unavailable for the next.
To prevent these embarrassing and frustrating user moments, IT might be inclined simply to train, or retrain, on the way to reset mic, speaker, and even camera settings, or on how better to work within a meeting app interface. But sometimes, the only remedy for a frustrated user seems a reboot — and who has time for that, again and again? Given that we're in the age of the user experience, shouldn't we expect more from our collaboration vendors?
Industry consultant Jim Burton, of C-T Link and BCStrategies, threw down the gauntlet on this issue earlier this week during an executive panel on the future of communications at Enterprise Connect. Having a hiccup every time he moves from a collaboration session on one vendor’s platform to one on another vendor’s platform “creates a real problem,” Burton said. “It’s not just one vendor, but every vendor does it.” Addressing panelists, he asked: “So, the question is, are you willing to do something about it … and to make some changes to your platform?”
While not every participating executive necessarily agreed that their company’s platform might be at fault, all committed to looking into the matter. Meanwhile, the executives — from BlueJeans by Verizon, Cisco, Microsoft, RingCentral, Vonage, and Zoom — noted the many nuances of the issue.
Some of the behavior resides with the operating system, and as Microsoft’s Scott Van Vliet, CVP of The Intelligent Conversation and Communication Cloud, pointed out, that will vary between Windows and MacOS on the desktop and between iOS and Android on mobile devices. Security will, and should be, a driver, he added.
“When you have your video on or your microphone on, you want to make sure that the application using it is the application you’re in. So, maintaining a lock on resources, especially a camera, is critical for the [desktop] experience,” whereas releasing a camera when a user minimizes a meeting on a mobile device is a security sandbox feature, Van Vliet said.
Does Microsoft hang onto resources post-meeting? That’s something Van Vliet said he’d have to look into, to “make sure we’re not creating any unnecessary loss on resources that are being used by our application but aren’t released as soon as the meeting ends.”
Absolutely, “any application should only hold on to resources for as long as needed,” Javed Khan, SVP and GM of Collaboration at Cisco. “But you have to take a use case-based approach,” he added. After all, you wouldn’t want an incoming phone call to grab your audio resources if you’re in a video meeting, he noted.
While releasing resources to create a seamless user experience is important, the issue is really much bigger than that, suggested Savinay Berry, EVP of product and engineering at Vonage. And it’s not just about security, either, he added. Imagine what having three or four video streams playing simultaneously on a mobile device does to battery life, he said.
“How do you control that? How do you manage that? Perhaps what’s really needed to help out users, and which should be looking into, is a standard that vendors can adopt for a shared resource model with “guardrails for security, battery life, and privacy,” Berry suggested.
But it’s not just the device in use for communications but the office environment, too, Eric Spadafora, VP and GM of BlueJeans by Verizon, said.
“As an industry, interoperability remains essential,” and that goes beyond the “hooking and unhooking of calls,” Spadafora added. “[Interoperability] is where I think all of us can work together to make sure that we’re providing that smooth platform and, ultimately, it’s not a differentiated, for example, to the user by which form factor or what location they’re in,” he said.
It all comes down to what’s right for the user experience, of course. As Nat Natarajan, EVP of products and engineering at RingCentral said, “That’s where we will win or lose.” It just has to work, agreed Harry Moseley, CIO at Zoom.
BCStrategies is committed to tracking our panelists’ promises to look into how their meeting platforms deal with resources, Burton said. And we’ll all have to keep them accountable.