In this article, the first 5 of 10 factors impacting the Unified Communications market

From their inception in the mid 1990's, unified communications (UC) environments have evolved from clunky standalone voice, video, and data collaboration applications prone to blue screen and regular crashes, to highly sophisticated and tightly integrated communications and conferencing solutions. Today’s UC environments are a far cry in many respects from those of the early days. Three of the biggest differences are that:

1) they are stable,
2) they are integrated with back office elements such as corporate directories, calendars, and office productivity applications, and
3) they can interface with the most common communications medium of all: voice.

Yet, in spite of all the improvements in their voice, video, and collaboration capabilities, UC revenues and real deployments remain astonishingly low. Why is this?

This two-part article takes a critical look at the market by discussing 10 factors that are shaping the unified communications market. Part 1 will discuss the first five factors; part 2 will tackle the final 5 factors.

The marketplace abounds with "definitions" for unified communications. Some are short and some are long, but the reality is that no one can articulate a definition suitable for everyone. Consequently, in an effort to capitalize on the hype and subsequent market opportunity created around the term unified communications, there are a plethora of companies promoting UC this and UC that.

The effect has been to confuse the market. Some enterprises believe that if they buy "this thing," they will have arrived at a UC solution. Other enterprises get confused by UC and don’t buy anything. Some companies are simply ignoring UC.

Although vendor companies have products named "Unified" this or "Unified" that, and although some companies have entire divisions with unified communications in their names, their products may actually be far from unified. Our intent is not to demean any supplier that has capitalized on naming conventions; we simply point out that UC is certainly not a vendor division, product brand, or individual communications component.

Unifying communications is an idea or a concept and not a product. Consequently, UC has no market size, per se: there are only communications elements that can make up a UC solution.

When we have gone about trying to quantify the "unified communications market," we have been forced by the reality of the situation to look at the elements that can comprise a unified communications solution and measure these individually. The truth is that people buy UC elements, not UC solutions, as has been discussed by us and others (see, for example, Melanie Turek's recent No Jitter article.

Companies don’t buy "UC systems," they buy UC components that first provide them value individually, and then if it makes sense, they unify them in some meaningful fashion. An IT manager in a large pharmaceutical said it this way: "You can’t sell unified communications...within the enterprise! ...But, you can provide voice services, audio & web conferencing, video services, etc....It is very difficult to define UC, but there is a way around it...the capabilities come first." This statement suggests that the value of the UC components must come first, followed by consideration of the value of integrating them.

3) How Important is UC to the World?

Figure 1. UC importance among all company initiatives versus the IT initiatives. 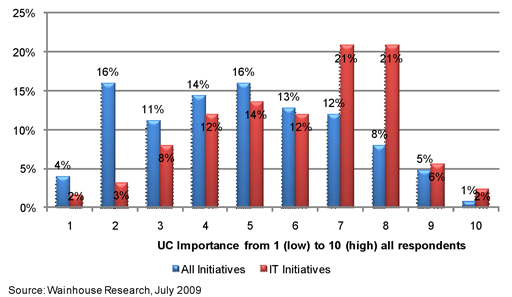 From the perspective of the enterprise as a whole, UC was ranked 5 or lower by the majority of respondents. The implication is that while UC is important to those of us selling, marketing, promoting, consulting on, or otherwise interested in communications as our employment medium, UC, at 5 or lower, is really off the radar screens when it comes to big picture thinking in most organizations. As the figure shows, UC is slightly more important among IT initiatives, but it still averages about 6, meaning that there are a lot of things, even for IT, that are more important than UC.

So it is not surprising that enterprises will buy the UC elements they need, unify them if there is a driver, possibly deploy a UC client to a small group of people, and slowly let a unified communications environment trickle out into the enterprise at large. As the figure also shows, UC is very important to a small number of enterprises, so for these enterprises, they will likely have the equivalent of a "UC big bang," where a fully-loaded UC environment is deployed to many within the organization.

In the same end user survey we asked people which UC client their organization was considering deploying. The intent behind this question was to gauge mindshare among UC suppliers, because we have postulated that "the vendor that owns the presence engine influences the rest of the UC components." 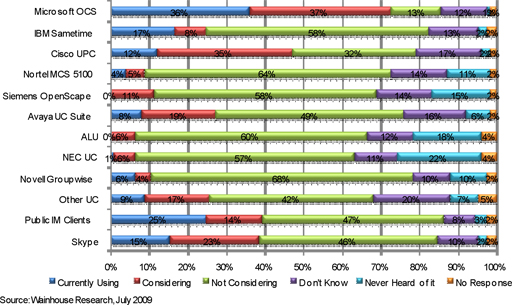 One key takeaway in this graphic is the mindshare garnered by Microsoft. Approximately 73% of the companies surveyed indicated that they are either now using Microsoft OCS or they are considering using it. Does this mean that Microsoft is the "800 pound gorilla" and all other contenders are relegated to "chimp" or "monkey" status, borrowing Geoffrey Moore’s nomenclature from Inside the Tornado?

What figure 2 does not show is how broadly UC clients are deployed within the enterprise. For example, a company with 1,000 persons could deploy OCS while a company with 100,000 could be deploying another UC client, such as Sametime. In the figure above, one cannot distinguish between them.

To get a handle on whether the game is actually over, and Microsoft is the big winner, we also asked survey respondents if they had actually selected their vendors. Thus far, only 22% have done so and another 26% are in process. This leaves between 50% and 80% of the market that is still up for grabs, meaning that the battles for dominance in the UC market are far from over.

As a side note, we were very surprised at the small number of companies that are issuing RFPs--hovering at around 20%; the implication is that companies are either staying with incumbent vendors or they are able to find the information they need via web searches, tradeshows (like VoiceCon and InfoComm), or from all the blogs and feature articles on sites like NoJitter.com.

5) No One Seems to Know How Much UC Costs

We have asked many, many people how much their UC deployments cost. Surprisingly, very few have a clue. At a recent meeting among integrators who deploy Microsoft software for a living and OCS in particular, we asked 10 people from these integrator companies how much a UC deployment actually cost their client. Not one could tell us, or they indicated that the installation was done through a special marketing program in which there was no cost to the client.

Furthermore, when we asked end users in our recent UC survey how much their UC deployments cost, 14% indicated it was free, 66% indicated they didn’t know, and the 18% that did give price ranges were all over the map.

Maybe we should not be surprised that the end users did not know how much their UC systems cost; however, among these end users were about 40% who said they are involved with their organization's UC strategy. So we would have expected that a higher percentage would have known.

We have concluded that UC client software has not sold in the volumes the vendors would like, and as a consequence, a lot of UC capability is being bundled with other deals or it is being given away at little to no cost. We are aware of several Microsoft initiatives to get OCS in the hands of the users at little to no cost; also, we believe OCS has been added to many software assurance packages for little, if any, additional cost. This may be one reason why Microsoft/OCS seems to have such a giant lead in terms of UC client mindshare--anyone can get it and deploy it free, at least for a time.

This leads us to the impact free UC is having on the overall market, which will be the first factor we consider in Part 2 of this article, which will appear shortly.