Outbound Evolution: From Predictive to Conversational 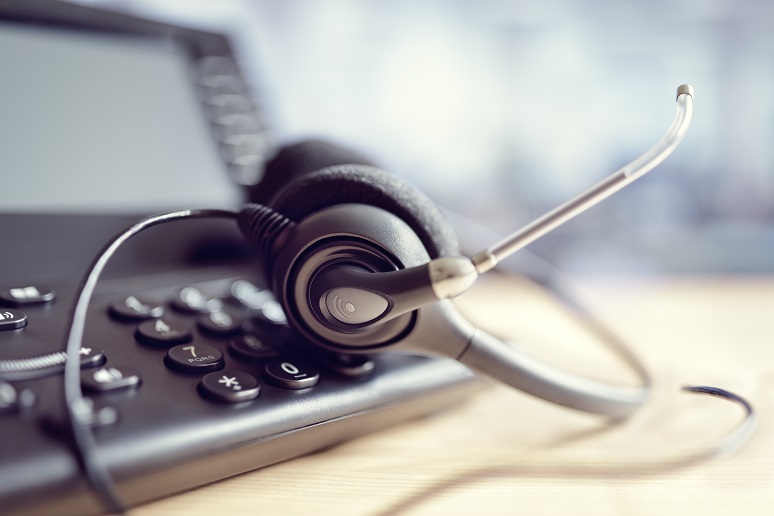 Image: Brian Jackson - stock.adobe.com
The technology used to reach out to customers is undergoing a digital channel transformation, similar to the ongoing evolution from voice-only to digital-first inbound contact center interactions. Across customer engagement software, omnichannel and cloud technologies have raised the profile of outbound applications.
Predictive Dialing
When I started as a contact center analyst in 1990, predictive dialers were a big deal. The primary use cases were telemarking and collections. Dialers were a combination of hardware and software that could call numbers from imported lists quickly, ascertain if there was a live customer or prospect on the line, and transfer that call to a live agent.
The best predictive dialing systems had an extremely high success rate for identifying a live person — north of 90% — versus a voice mail message or tone delivered from the phone company. There was a lot of proprietary technology involved, resulting in expensive per agent pricing for predictive dialing — two to three times the cost of an inbound agent license.
Consumers quickly caught on to the annoyance of most calls coming from dialers, especially the long pause before a live agent came on the line. Regulation followed that applied fines to companies that were not compliant with new rules, e.g., a live agent must be on the line within two seconds of the consumer answering.
Over time, as consumers answered dialer calls less often, companies used dialers less. Luckily for companies that still needed to reach out to consumers, digital engagement technologies — primarily delivered via smartphones — have become an effective replacement for marketing and sales campaigns, formerly completed with voice calls. In addition, notifications (e.g., appointment reminders) have become another widely used outbound communications technique.
Conversational Engagement
A few vendors dominated the market for predictive dialers from the 1990s into the early 2000s — think Davox or Melita. As the use of predictive dialers waned, most contact center solutions added outbound capabilities based on less proprietary algorithms, and these dedicated dialer companies expanded into inbound/outbound contact center suites, e.g., Aspect Software. Preview and power dialing became common in other contact center suites, but they lacked many of the campaign management features that some enterprises still wanted to deploy.
For customers of those application suites, a new type of partner has emerged, exemplified by Acqueon, a technology company spun-out of systems integrator Servion in 2020. Acqueon's conversational engagement software lets customer-centric brands orchestrate campaigns and proactively engage with consumers using voice, messaging, and email channels. Acqueon leverages a data platform, statistical and predictive models, and intelligent workflows to let enterprises maximize the potential of every customer conversation.
As seen in the graphic below, Acqueon has taken the campaign management analytics and desktop components common in predictive dialing suites and transformed them for an omnichannel cloud world. In doing so, they have also become a partner of choice for cloud contact center vendors with customers wanting advanced engagement management options. 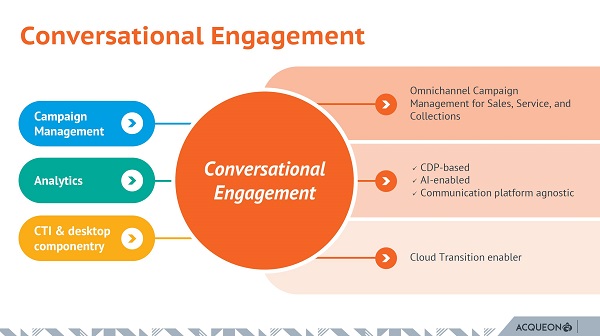 Over the past couple of years, Acqueon has created partnerships with the full spectrum of contact center providers. From full premises/cloud portfolio vendors like Cisco to pure cloud companies such as NICE inContact to “build your own” platform solutions like Twilio and AWS Connect, Acqueon is helping companies transition from premises to cloud and from voice-centric predictive dialing to its conversational engagement vision. 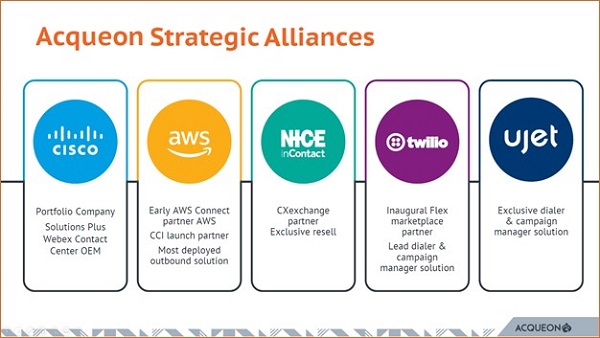 Most of Acqueon’s 200+ customers are well-known B2C brands, whose names regretfully can’t be shared here. But the story of one of these companies, as told to me by CEO Ashish Koul during a briefing call, will paint a picture of the impact Acqueon is making in the market.
A year ago, a U.S. bank using four different premises-based contact center systems and 13 different CRM solutions to support 5,000+ agents was looking at a major digital transformation. They wanted to not only upgrade the agent software but also allow branch bankers to serve as agents.
Step one was the deployment of the Acqueon desktop as a single unified interface across the many CRM solutions deployed. During this process, the COVID-19 pandemic unfolded, and there was an urgent need to convert agent operations to the cloud for remote work. The bank decided to move from the premises ACDs to Amazon Connect.
Other software providers have transitioned from predictive dialing to engagement management, but none have the breadth of solution partners that Acqueon has developed. As shown in this anonymized case study, Acqueon’s ability to quickly pivot from supporting premises ACDs to cloud-native contact center solutions was a big advantage to its bank customer.

A Guide to Understanding the Omnichannel CX

By bridging the gap between simulated empathy and human empathy, enterprises can understand why customers feel the way they do and communicate effectively.

While not the first deal of its kind, Zoom and Five9 might be the first compelling story of bringing together UCaaS and CCaaS.

Zoom's latest acquisition hammer homes the coming together of UCaaS and CCaaS.