Collaborating with Google - Part One

I regularly use productivity applications from both Google and Microsoft. Which is better?

The question is impossible to answer, really. For one thing, it's a matter of personal preference, and to a large extent, familiarity breeds comfort – it depends what you're used to. This is especially true of productivity applications. By definition, these tools are supposed to help us be productive, and unfamiliar tools can be a hindrance, which is a deterrent to sampling new tools.

However, I do find a fair amount of ignorance about Google Apps within the enterprise. When I call upon various Google tools in attempts to collaborate, my colleagues' reactions often follow a pattern of initial resistance, then surprise of how differently Google approaches collaboration than Microsoft.

Today's post presents an overview of Google Apps vs. Microsoft, with particular focus on comparing the two suites from a collaboration point of view. In my next post, I'll take a closer look at both companies' real-time communications offerings.

Differences and similarities
First, let's look at the similarities between the two vendors:

• Both Google and Microsoft offer alternatives for productivity applications, email, contact management, calendaring, IM/p, and video.
• Both sets of solutions leverage their elements across their suites.
• Both vendors integrate with UC solutions from other vendors and providers, but – via Lync – Microsoft offers an enterprise UC solution directly.
• Both vendors target consumers and enterprises. Microsoft is well established and dominates market share in enterprise segments. Microsoft also is expanding into consumer segments via Skype and Office 365 Home edition, Xbox, etc.; Google is very well established in consumer segments based on search, Android, and Chrome and is expanding into commercial accounts – particularly in SMB, education, and government.
• Both vendors support a native mobile experience on Android and iOS.
• Both vendors continue to innovate and improve, and recent improvements from both vendors are narrowing the gap between the solutions.

Specifically, both vendors offer comparable suites of applications. The amount of head-to-head competitive solutions between these firms is larger than many realize and continues to grow: 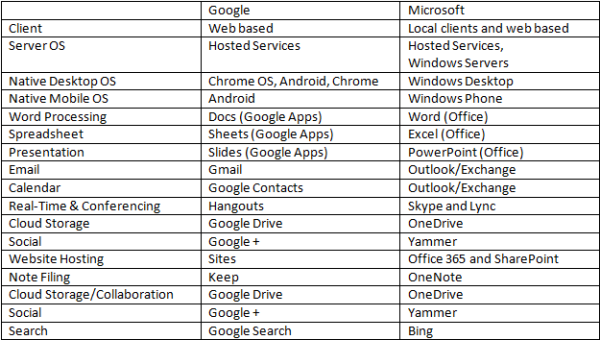 Using Google vs. Microsoft in practice
My desktop typically runs Outlook/Exchange, Office, Lync, and Skype. (In the past, I've combined Lync and Skype, but now I've reverted to using them separately.) For online tasks, I have both Google Apps and Office 365. I use both services regularly every day, including IM and video calls in both Lync and Hangouts.

The overlap in applications is very broad, and they each have their strengths. Microsoft's core strength comes from its rich clients. Google's core strength comes from cloud savviness. For writing destined to be posted online, I prefer Google Docs – it's simpler and easier to cut/paste into other systems. For PDF or printed reports with additional formatting, I favor Microsoft Word. I use both daily. The two vendors, however, are moving closer together. Microsoft has enhanced its online offerings with Office 365 and OneDrive, and Google recently improved its offline capabilities.

My work entails juggling many windows and tabs, which can make it a bit tricky to find specific content. For this, I find Google a bit more organized – my email, for example, is in one "pinned" tab. Outlook opens messages in separate windows and scatters these windows on different monitors. Perhaps there's a setting to prevent this, but presently, I often close Outlook just to get rid of all the windows. If for some reason I want multiple windows in Google, of course I can open as many tabs and browsers as I like.

The applications and documents in Office are tied to specific versions. Compatibility warnings pop up frequently (or don't pop up, but just cause problems), and documents have different extensions and formats. Google Apps probably has more versions than Office, yet they are invisible, and there are no Compatibility Packs. I am unaware of which version of Google Apps I am using or when Google upgrades it. I don't recall when, for example, Google Docs added support for footnotes, but I recall Office upgrades in painful detail.

However, it doesn't take long to hit a ceiling in Google Apps – long documents, graphics, and all sorts of advanced features are missing or poorly supported in Google Apps. I tried the new upgrades in Google to edit Word docs and hit a ceiling right away (could not insert a row in a table).

What about collaboration?
Both word processors have strong collaborative features. Google Apps is best for multi-user, real-time or simultaneous collaboration. This is probably the most significant feature of Google Apps. Collaboration should be more than just, "Look at my screen." Everyone should be able to contribute freely without content being locked or users' needing to pass control. Because of this strength, I sometimes reformat Office documents to Google formats for the collaborative phase and convert them back to Word or Excel for finalization (when necessary).

Office is very good for asynchronous collaboration, particularly with regard to Word's "Track Changes" feature. Google has made some recent improvements, but this is Microsoft's strong card. Likewise, Microsoft narrowed the gap on multi-user collaboration with Office 365 (Office Online), but hasn't caught up to Google. I do not recommend Office 365 for concurrent editing.

When collaborating with Office/O365 documents, I avoid file corruption by sharing read-only links and soliciting feedback through revision marks. This process takes the solution a step in the right direction, but the result is still multiple files to merge manually. For some people, this process has intrinsic value, as it preserves a document's evolution. Google does offer "revision history," but it's a very different approach that can be hard to control. Also, Word Online is not a replacement for the Word Client. For example, Word Online doesn't support revision marks.

Google Docs as a word processor can be frustrating because of its limitations, and thus it is best for simple, short content. Google Docs has a very weak spell-checker, which is odd given I regularly use Google Search as a spell-checker. I've been known to cut/paste complete Google Apps documents into Word, just to spell check them.

Google Sheets also supports great multi-user collaboration features, but it takes even less time to hit the ceiling as the application has very limited functionality. It does have two great features though –GoogleLookup allows cells to show queried figures such as stock prices and exchange rates. Google Sheets also has a built-in webform for surveys. It can send a link to collect responses in spreadsheet format very quickly and easily. This more robust version of Outlook Polling works across domains and organizations and can be used for complex surveys.

If I need to create more-than-simple tables, columns, long documents, or other formatting, I use Office. Office's very strength – its sophistication – does have a drawback, though. With power comes greater complexity, and less intuitiveness. There is a tremendous amount of menus and options and not all in logical places. Why are page numbers under Insert instead of Page Layout? Why is changing the view to see mark-up under Review, not View? I find modifying (or fixing) templates and Normal.dot highly awkward.

Other applications
Office and Google Apps have similar core applications, and both offer a bit more in the extended family. Microsoft Office has numerous document templates stored in the cloud. Google has a nice collection of apps and plugins in the Apps and Chrome stores. Both Microsoft and Google offer an alternative to Evernote, but I haven't moved over, although OneNote with the Surface offers a primitive form of near real-time collaboration similar to a SMART Board. Neither ecosystem offers mind mapping, a separate collaborative application I use regularly. I do use my Google credentials to log in to multiple third-party applications.

Next time: Email, mobile, and Hangouts vs. Skype.

Six examples of how new forms of voice make the communications pie bigger.