Zeus Kerravala
If ever there was a song that described the state of voice assistants today, it’s Elvis Presley’s “A Little Less Conversation.” Queue up the record:

A little less conversation, a little more action, please
All this aggravation ain't satisfactioning me

The song came to mind last week while attending the Amazon Web Services (AWS) re: MARS event for machine learning, automation, robotics, and space and hearing about Alexa Conversations, an update to the company’s voice agent aimed at making a conversation more interactive rather than being a series of discrete statements.
Within the context of digital assistants, Elvis’ words mean that sometimes when it comes to conversations, less is more. At the event, Eric Posen, principal product manager from Atom Tickets supported this statement by discussing the process of using Alexa to purchase movie tickets through Atom.
The interactions would go something like this:
And the conversation goes on and on. The full flow can be seen in the below image. You can see the tie to what Elvis meant when singing about wanting less conversations and more action to reach a desired level of “satisfactioning.” Faster, more direct interactions are obviously better. Prior to this update, the process could make using Alexa burdensome and tiring and more difficult than using an app, Posen admitted. Most users typically choose the path of least resistance, so if the app is easier to use than Alexa, guess what? Bye-bye Alexa, at least for this kind of use case. 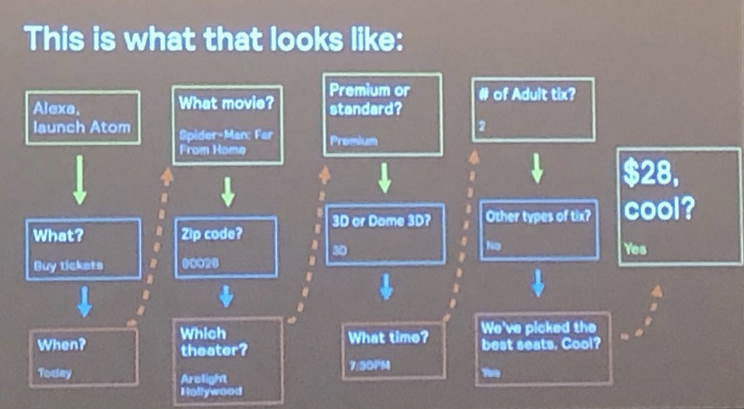 The goal behind Alexa Conversations is to remove many of these steps by making discussions with the voice agent more natural. This is done by taking advantage of things Alexa knows and predicting what the user will want instead ahead of the request. Based on past history, Alexa should be able to guess where a user wants to see a movie, at what time, and how many tickets to buy. This can significantly cut the flow down and turn a long conversation into a very short one, which is likely faster than using the app.
Posen showed the “after” slide as he walked through the interaction using contextual AI. Once asked, Alexa responds with:
Three words. That’s all it took to book tickets. This should meet the criteria of a little less conversation, a little more action… and raise a customer’s satisfactioning level. 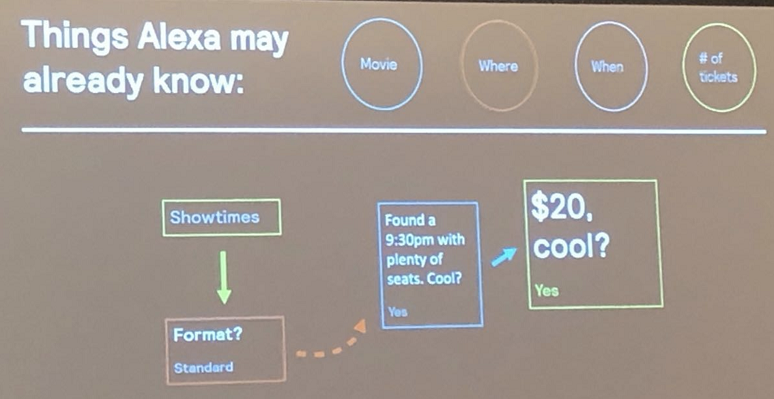 In addition to providing a better customer experience, the dialog is much simpler to program. AWS has done much of the heavy-lifting in the area of AI training so programmers have less work to do. For Atom Tickets, the conversational AI took about one-third less code than previous Alexa programs, Posen estimated.
OpenTable and Uber presenters, also in this session, reiterated the challenge of using Alexa for simple conversations. Any time an interaction requires multiple steps, there’s a heavy burden of having to have the speaker say “Alexa” to initiate the interactions and have the voice assistant perform tasks. In the case of OpenTable, the phone is still its biggest competitor as people tend to call when requests aren’t straightforward. The conversational agent is better able to handle these requests as it’s using all of its inherent knowledge.
During the session, AWS highlighted an initiative called “Night Out” where all three of these services come together to create a complete evening. The user merely tells Alexa that he or she wants to book a night out for two and Alexa comes up with a recommended combination of movie and dinner and can even prearrange an Uber to take them. The user just needs to wait for the recommendations and say yes or no to them or perhaps even just a single yes to a series of proposed events.
I do believe we are at an inflection point for the voice interface to become real. Alexa, as well as its peers Apple Siri, Microsoft Cortana, and others, have made it much easier to speak a command to complete simple tasks. Now that people have grown accustomed to this, it’s time for the voice assistants to start tackling bigger problems. Alexa Conversations enables larger problems to be solved, with less effort and less programming. Seems like a win for all parties involved. Maybe next year, I’ll be able to ask Alexa to write this post for me!