Words of Wisdom from 3 Women in Communications 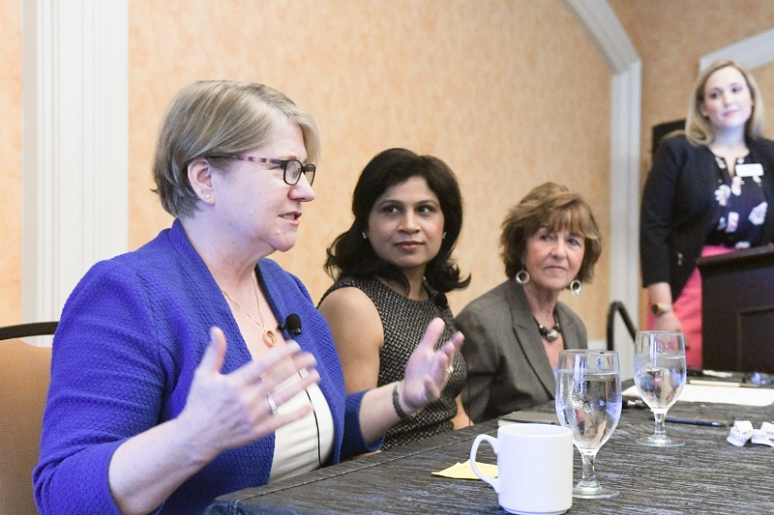 In an ideal world, we would not be here, in 2019, still talking about the lack of gender diversity in technology and the challenges that women enterprise IT professionals regularly face working in a male-dominated field. But gender disparity is still very much an IT reality.
But on a positive note, we’ve seen a tremendous amount of attention brought to the issue over the last couple of years. The need for gender equality is much discussed these days, which means there are more opportunities to enact change and drive progress.
At the recent Enterprise Connect Orlando 2019 event, we made this one of our missions, taking on initiatives to help engage people in this discussion and promote the advancement of women in IT and throughout the industry.
As part of this effort, we asked three women in enterprise IT to share their experiences and career advice with attendees at our first-annual Women in Communications luncheon. I took away countless pieces of advice from the panel, and here I’ll share the top six that resonated with me (click here to listen in on the full panel discussion, and watch this video to learn more about our women’s initiatives at EC19).
1. Take a Chance on Yourself
Jeanne Spinosa, telecommunications manager at Brown University, shared that a defining moment for her was in the beginning of her career, almost 40 years ago. “The cliff notes version is I was a grad school dropout. I had no income, and no future in sight,” Jeanne said. Then at a softball game, she ran into an old college friend working at Rolm and teaching people how to use their computerized telephones. “And I said, what the heck does that mean? And she told me, and I thought, well that’s kind of cool.”
Two years later, Jeanne was hired on the spot for that same job when her friend took a promotion. “She said, you’re smart, you’ll learn this, you’re hired.” And that’s how she began her career in communications.
“I didn’t know anything. I figured I could learn it, and I wasn’t afraid to say I don’t know. … Never be afraid to say I don’t know and take a chance on yourself, Jeanne said. And don’t stop there! “Take a chance on someone else as well.” (For Jeanne’s full story, read the No Jitter post, “From Brown Back to Brown: A Telecom Career Unfolds.”)
2. Ask for, and Give, Assistance
When it comes to taking a chance on others, being a mentor to younger women is important to all three panelists. Erin Leary, end user services agile transformation leader at Boeing, said mentoring is the best part of her day. “I love being able to talk to people about what makes them excited about work, how they see their future going, and how to empower them to take the right steps,” she said. These conversations, especially with younger women, often come down to discussing roadblocks and how to get around them, Erin said.
Gauri Bhalerao, senior manager of collaboration, networking strategy and engineering at Yum! Brands, pointed out the difference between mentoring and sponsoring. Sponsorship, she said, goes beyond the type of advising that comes with mentorship to propelling a person forward -- as a sponsor you’d say, “OK, this is a person that will be great for this job, and I’m ready to vouch that [she or he] will be great,” Gauri said. In her experience, every time Gauri has received a promotion was due to sponsorship.
She shared an experience where she was asked to move out of software development and lead infrastructure at Yum! Brands. “I’m like, ‘Are you kidding me? I had never done this before,’” Gauri said. Her sponsored assured her that she had the technical prowess for the role, and that she’d be great at it because she brought something unique to the table. “So sponsorship is the key for me more than mentorship, because that’s what really takes you to the next level,” she said. “Don’t be afraid to ask for sponsors.”
3. Be the “Woman in the Restroom”
It’s great to have women supporting other women, but as an attendee pointed out in a question to the panel, women aren’t always supportive of other women, and too often we hear stories about women working against one another. Panelists attributed competitiveness as the likely culprit -- as Erin said, “It exists. It’s a fact.” With that, she added, “we shouldn’t either shy away from it or overreact to it. It’s just part of getting through a corporate experience.”
In providing advice on how to combat or mitigate stereotypes of women in the workforce, Erin used the “women in the bathroom” meme – “It’s like, women in the bathroom will help you with anything, right?” So, she continued, “You need to be the women in the restroom, not the ones out on the dance floor.”
Women in the workforce need to raise each other up. You might say that’s her personal mission, in fact. “Supporting women is a huge part of what I want to be able to leave as a legacy, and to look back and say, in that zone, I did more good than harm.”
Gauri agreed, saying, “A lot of times, I think women are harder on women -- and that shouldn’t be the case.”
Continue on next page; click below

It's Time to Spotlight Women in Enterprise IT

The case for supporting more women in technology is strong, and so is Enterprise Connect's commitment in fostering the careers of women in enterprise communications and collaboration.

Women in IT: Know No Boundaries

Want to be a CIO or hold another top technical role? Why not, say participants from the EC21 Women in Communications Roundtable.