Will the Next Wave of Innovation Make Enterprise IT Less Relevant?

Smart objects will not be perceived as IT assets, so the next wave of IT innovation will belong to the business teams.

What if something comes along that disrupts all the IT department's plans to offer centrally contained and managed IT services and applications? We may have seen most of the impact of the consumerization of IT with the adoption of smart devices and BYOD (see "Consumerization of IT: Is It More than Just Bring-Your-Own (Mobile) Device?"--The answer is "not really"). Business IT has figured out ways to accommodate these new requirements and segregate data and devices where necessary. In short, there is light at the end of the tunnel on this one.

However, I would not bet on the consumer market being the real IT disruptor this next time around. The enterprise "line of business" will drive it, and it will be a much larger challenge than just getting everyone a smartphone.

Connected and Internet-Enabled Objects Will Work Independent of the Data Center
It seems that from basketballs to washing machines, there is nothing left in the world that cannot be "smart." The current definition of smart devices is often limited to sensors and connectivity, so the prevailing assumption is that tracking and storing the information from the device will require a data center where all of the information can be processed and utilized to "everyone's" advantage.

Historically, this has not been the case. Smartphones are having a massive impact on enterprise IT, but their predecessor was plain old cellular telephones (POCTs?), which were useless without the cellular network. Personal computers had a revolutionary impact on business IT, and their predecessors were dumb terminals dependent on mainframes.

In the next generation, there are minimal technical barriers to the possibility of newly connected devices following the same pattern. The first smart objects may be only as smart as their RFID tag or Bluetooth connection, but as it becomes affordable and technically feasible, more autonomous information processing will reside in the devices themselves.

One driver of this is the desire to preserve functionality when the device is offline. Devices that are performing important tasks, whether athletic, diagnostic or security related, are potentially useless if they cannot function independent of connectivity to somewhere else. The 4iiii GPS device pictured in the diagram below has its own storage for location history--not only in case there is no connectivity to a smartphone, but also to avoid battery drain even when that connection is available. 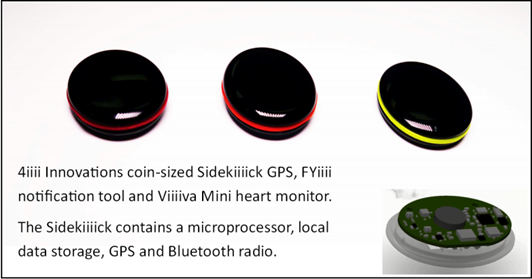 If everything was really going to happen in the cloud, would we care if each generation of smartphones had a more powerful CPU or more storage? No, we would only care that they were equipped with faster wireless data speeds. Instead, based on past history, we can look forward to a whole array of specialized computing devices and objects serving unique business purposes.

Specialization of Technology Will Disrupt Centralized IT Standards
As IT professionals, we try to be futurists in order to effectively plan, equip and train our relevant resources for the next big thing. But one of the shortfalls of looking for disruptive technology trends is that we only look down the road on which we are already traveling.

Last year I was speaking to a warehouse manager of a large company. He had some questions about the firm's video conference system, which was scheduled to be upgraded. He anticipated that he should be able to walk into a room with a tablet and have it connect seamlessly via Bluetooth or some other wireless connection.

Was this line of thinking a case of his familiarity with similar synching technology at home, perhaps with Wi-Fi enabled television? This is a possibility, but what is certain is that this manager also works with embedded wireless technology in his warehouse and supply chain today. The products he is in charge of are valuable enough to go beyond bar codes. An RFID-enabled tracking system and a specialized wireless network are now part of his daily warehouse operations. His perception is that if this is already standard on non-IT-related products, it should be a no-brainer on native IT-centric systems such as tablets and IP-enabled videoconferencing. This is not superior consumer technology driving expectations; it is superior "line of business" technology.

There is also a precedent with building automation. Enterprise facilities and security departments have been driving their own business IT decisions for many years. Much of the network-enabled building automation, closed circuit video and power management systems are purchased independent of the IT department and supported on autonomous networks. In many cases, these systems are growing to the scope and complexity of IT supported systems, but still are not considered "shadow IT." Specialized purposes leave them under the radar of IT governance. 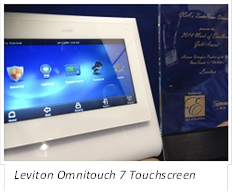 Leviton is a great example of this. At CES 2014 they received the Mark of Excellence (MOE) Award of Human Interface of Product of the Year for their OmniTouch 7 Touchscreen. It is part of their home and small building solutions suite.

Leviton's building management portfolio challenges you to "Think of Leviton as the brain of your automated building," where a variety of systems can be managed to "maximize safety, comfort, convenience, entertainment, and energy savings." Its solutions promise the ability to "remotely control any aspect of the facility from your smartphone or tablet with zero monthly fees. Access multiple locations from the app or customize your own interface using our software developer kit." It's a very IT-centric proposition, but you are unlikely to find it being promoted at IT-focused tradeshows and websites. A quick look at Leviton's event calendar reveals a majority of facility, electrical and security-centric shows on the agenda.

The old IT trick of just not allowing it on the network won't work much longer. Last June Ayla Networks, a Silicon Valley startup, unveiled the Ayla Platform, which allows its partners to transform thermostats, appliances, lighting and other everyday products into interactive connected devices. The portfolio includes Ayla-enabled Wi-Fi modules and IP gateways, a proprietary cloud service for managing devices, and Ayla application libraries. No programming code is required for customers to create virtual devices. The "Internet of things" can be built with its own WAN connection and its own data center. 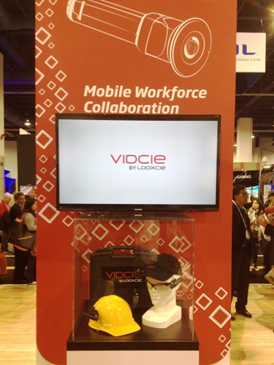 Connected buildings and objects is small change compared to the specialization that will come out of new interface options; from wearable technology to neurotechnology, the business value in these advances won't be as alternatives to using a mouse and keyboard. The real boon will come in very specialized business products that will be a challenge to standardize companywide due to form factor demands.

J.P. Gownder, Forrester Research's Principal Analyst serving Infrastructure & Operations Professionals, published a report prior to CES predicting that the real innovation in wearable technology will be in the business world, stating, "Because of consumerization--the fact that the technology we have at home is often better, faster-moving, more agile, more mobile, etc. than the tech we are issued at work--we tend to assume now that *all* innovation will originate on the consumer side. Wearables 2.0 will upend that a bit, because the most useful enterprise devices are often highly specialized." His compelling examples include sensor technology and augmented reality allowing a phlebotomist to see the veins in a patient's arm. It's a much more significant benefit than walking through the neighborhood seeing Yelp reviews out of the corner of your eye! 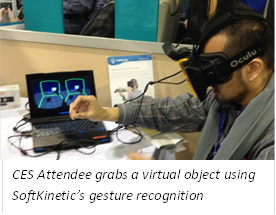 Will IT be the one to provision and support these solutions? Probably not, for two reasons: ownership and expertise. "Smart" objects will often be enhanced versions of the objects the business is already using. Since the connectivity will be providing additional functionality, the business, not a centralized IT department, will decide where that functionality delivers value.

Expertise is the second challenge. IT support can tell when a PC won't connect to the Internet, but can they tell when the phlebotomist glasses are seeing all of the veins? Will the product development department consult them to troubleshoot the depth scaling on their gesture recognition system? IT could adapt to any one innovation, but with enough specialized systems emerging, it will be more practical to employ technical expertise at the business level. Many business groups are already responsible for their own apps. The difference here is that the object itself is the app.

Specialized IT Systems Will Lead to Smaller Autonomous Networks
Through the 1970s and 1980s, the Internet existed as autonomous, purpose-built systems with limited connectivity (e.g. ARPANET, MILNET and NSFNET). Commercial ISPs such as Netcom, Prodigy and CompuServe soon offered services, also with autonomous systems. Since commercial services were offering access to similar content (email, usenet, chatrooms, news, etc.), either connectivity between the systems or dominance by a single ISP/content provider was inevitable. Today, businesses and consumers depend on ISPs primarily for Internet access rather than content and applications.

Cisco now envisions the "Internet of Everything" in which all of the connected devices are networked to anywhere else in the world. Your car will know that you hit the snooze button on your alarm clock and modify your driving route to meet the expectations of your connected appointment book. Another example was a smart desk that could notify the teacher when schoolchildren are sitting with an unhealthy posture. All of this depends on massive interconnectivity, which would be very advantageous to companies such as Cisco.

If you are worried about security, they can solve that problem for you as well. The level of trust in the Internet has never been very high, and widely-publicized revelations about NSA surveillance are likely to decrease that trust level even more. Unencrypted Bluetooth connections are the most common connectivity between devices. The technology itself is less secure than encrypted Wi-Fi, but Bluetooth's distance limitation mitigates the possibility that someone is tracking and compiling your personal information at some faraway data center.

The more invasive the collected data becomes about people's personal health and habits, the more protective consumers will become of it. The level of personal health information now available through smart devices is endless--from simple pulse and heart rate monitoring to brainwave stress monitoring and DNA screening for cancer risk. Even in the unlikely event that consumers and employees are comfortable with the dissemination of this data, it is likely that an agency such as HHS will regulate the data under HIPAA (while simultaneously wanting aggregated access to it for their own analysis).

What do today's functioning smart objects talk to? Primarily, they are close proximity connections over Bluetooth, Zigby, Z-Wave and WiFi. Eventually there will be some value in an outside service, such as the prior example of Ayla Networks, to store and process data. Will these networks be part of the "Internet of everything?" More likely, any data that is shared outside of the local network will be transmitted over specific networks to specific partners--security companies, healthcare providers, etc. In the enterprise, there is a good chance that the IT team will not be called upon even to provide the connectivity, a return to separate, purpose-built domains.

Where Does Today's IT Department Fit in the Future Enterprise?
It is very unlikely that the product manufacturing division is going to march up to IT and announce, "We're in charge now." What will happen is that innovation and enabling technology will start appearing in other parts of the business. Enterprise IT trends have already helped the process by standardizing services and systems to the point where they are low cost commodities. We'll still need these commodities for the foreseeable future, but many have become generic enough to not require the inventive IT leadership that was so valuable years ago.