Here is the graphic of the Cisco Collaboration Cloud architecture from Rosenberg's post:

Having no formal education in the intricacies of cloud architectures, I have to admit that looking at this graphic is somewhat reminiscent of looking at hieroglyphics scrawled out on the wall of an ancient tomb. It looks nice and well organized, but what does it mean? So I asked Rosenberg if he could explain a bit more so that "someone like me" could understand what this all means for Cisco as well as the evolving enterprise communications landscape.

As Rosenberg explained in the post, Cisco designed the Collaboration Cloud architecture with the goal of building a platform that would take it into the next decade or two. As such, it incorporated modern design and cloud practices, like building on a platform such as OpenStack or Cloud Foundry. "These are modern tools providing APIs for automation of deployment, installation of software, upgrade of software, routing of requests – those kind of capabilities -- as well as giving us access to virtualizing the underlying compute and network storage," he said.

This approach brought data center agility, as well as automation, flexibility and elasticity, said Rosenberg, explaining that the ability to keep the software separate from the underlying hardware for network storage and compute makes it far easier to move software across data center infrastructure. "That was important to us from a flexibility perspective as well as a great way to gain features like disaster recovery, for example, where we've been leveraging different data center deployments to facilitate that," he added.

In addition, Cisco "latched onto" the idea of microservices, a new cloud software design paradigm. As Rosenberg explained, microservices "receive an HTTP query for some piece of data or to take some action, process it and return a result -- and then they're done. They're each handling a very specific sliver of functionality."

Microservices are stateless, which gets tricky when building a cloud platform, Rosenberg said. "Anything whose state needs to survive past that one Web transaction is persisted separately into some kind of backend storage," he explained. "You specifically design it so that the next time there's a request for data, that can go to a different instance of that stateless server and it just reads the database to get the latest data, processes it and writes the result back. And you really have to design the software specifically to operate in this model, but once you've got software working this way it gives you a bunch of important properties."

This sort of microservices approach provides infinite horizontal scale through the addition of virtual machines, Rosenberg told me. This also enables stateless upgrades, allowing changes to be made and new versions deployed while transactions continue to come in.

In addition, Cisco used fit-for-cloud database technologies that automatically scale and restart. . "Cassandra, Riak, Redis are all good examples of software that does that, and so we primarily use those type of things for the persistent storage of content. And the net result means the entire system has this horizontal scale property that's really important to make the system work in the cloud of scale," Rosenberg said.

Securing Collaboration
Security, too, was top of mind when building the Collaboration Cloud and Project Squared mobile collaboration application running on it, said Rosenberg, noting that security concerns often holds enterprises back from adopting cloud solutions.

In particular, he added, Cisco paid close attention to things like data privacy and data sovereignty. "If we truly are user experience first, which we said we are, we have to figure out how to deliver the experience we need to deliver, which absolutely requires content in the cloud - and then how to make our customers feel comfortable with it. And so, that led us down this path of designing from the ground up end-to-end encryption of stuff that allowed us to have the best of both worlds: a great user experience, while meeting the privacy considerations that most enterprise customers will have," Rosenberg explained.

"Well they certainly have been intertwined, ... but there's a demarcation line between them in that under the hood there are these Web-based interfaces between the client and the collaboration cloud that allows for other experiences to be built on top of it – although we really tuned it for delivering Project Squared," he said. 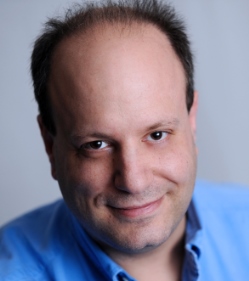 Driving Cloud-First Thinking
During our call, Rosenberg also touched on how he has been working at Cisco to drive the cloud-first mentality. He explained how cloud software development is different from traditional premises software development, requiring, as noted above, microservices and scalable database technologies.

"One way to sum it up is that premises software is typically about cramming as much stuff as you can into one box and limiting the number of boxes the customer has to put in their data center. So it's more about consolidation," he said. "But cloud software tends to be more about decomposition" -- customers aren't aware of all the services running in the background. "But the decomposition in the cloud facilitates scale. So it's a different engineering paradigm for things as basic as that."

That has meant a cultural shift in DevOps. He explained: In the classic premises software model, "once the vendor hands off to the IT department, they are out. You don't get any data on usage of that software – that's why it gets put on premises. And that's like completely the opposite of the cloud model where you actually have lots of data because you are running the software, and more importantly you can actually use the data to drive ongoing engineering investment."

Now in the thick of making sure the software is up and running all the time, Cisco engineers must consider questions such as: How do I find problems? How do I plug in to my logging system? How do I make sure I've got the right graphs and metrics to troubleshoot? And, how do I make sure the right pager goes off if there's a problem? "Those kind of things become first-class citizens in the development of the software itself rather than something that's sort of a bolt-on later on, as often these things are even provided by different vendors."

Rosenberg has promised more deep dives on the Collaboration Cloud architecture to come in the near future. He reminded me of the tag line, "Cloud is software in motion," emphasizing that the Project Squared software, for example, is already different today than when revealed at Collaboration Summit. For example, Project Squared now uses Secure Real-Time Protocol (SRTP), which it didn't at the time. He candidly noted that this all means that whatever this blog says could be different in a few months, weeks -- or even days -- simply because that is the nature of the cloud.