It's time for my periodic check on what's happened with WebRTC in terms of browser adoption.

Just over a year ago, I last updated the No Jitter community on the "state of the browser" in regards to WebRTC. We're not in a different situation today than we were last year -- or are we?

I'd like to begin this year's state-of-the-browser report with a slide I've been using lately in presentations I give: 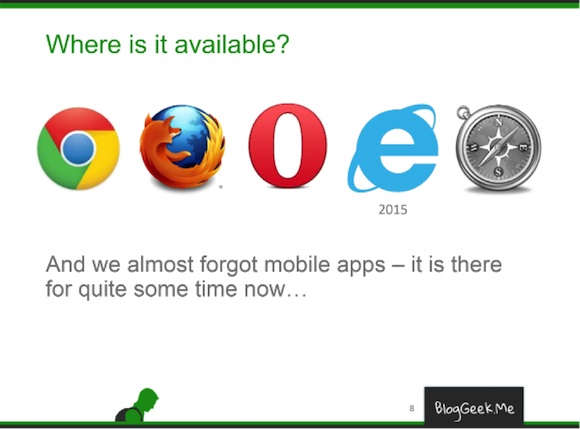 There are three interesting things to note here:

With that in the back of our minds, let's go over the details.

Chrome, Firefox & Opera
Each supports WebRTC -- and for quite some time now.

Chrome is leading the pack (as usual), with Google's focus on mobile and the imminent introduction of VP9 codec support.

Mozilla adopted the H.264 video codec first for Firefox, after striking a deal/partnership with Cisco. A few vendors (Cisco among them) are already making use of this Firefox capability.

All three browsers support WebRTC on Android, but not on iOS.

Microsoft Edge
Microsoft is sun-setting Internet Explorer with the introduction of Windows 10, replacing it with Edge, written from scratch. Edge already supports WebRTC's getUserMedia API, which is where every browser started with WebRTC. By year's end, I expect Edge to have sufficient support of WebRTC to make it interesting -- though Microsoft will most probably stick with the H.264 codec for now.

In 2015, Microsoft won't be adding any WebRTC support to Internet Explorer. That may come later, or not at all.

Apple Safari
There's nothing new under the sun to report here. Apple being Apple, it has shared no announcements, plans, roadmap, or work it's doing on WebRTC. The closest thing available is the WebRTC in WebKit project, which I view as an exercise in futility -- trying to force Apple's hand by giving it ready-made code for something to which it hasn't committed.

Mobile Apps
More and more we see vendors embedding WebRTC into their mobile apps. They do it directly by porting a WebRTC library (we have two big ones now -- WebRTC and OpenWebRTC), by using a third-party software development kit, or via a full-fledged platform.

In 2014 using WebRTC in mobile got easier. In 2015 we've seen distinct improvements in its performance on mobile.

This popularity is true for both iOS and Android.

Plugins
If you want a free tool, you can use the popular Temasys plugin. However, from what I've heard recently, Temasys seems to be shifting from its free model for this plugin to a paid-only or mostly-paid model.

Meantime, the Priologic, or easyRTC, plugin, announced with much fanfare just a year ago, was dead before arrival.

With plugins and Flash becoming less popular in browsers, you have to ask yourself how much longer browser vendors can ignore WebRTC.

All About Adoption Now
What we've seen in 2015 is the adoption of WebRTC by industry giants.

WebRTC now counts among its users the following companies: AT&T, Cisco, Comcast, Facebook, Google, and Microsoft. They are all using WebRTC in production systems of their services.

No doubt, WebRTC is here to stay -- and here to succeed.