WebRTC on the Rise? Geek Questions Hold the Answer

If WebRTC follows the same curve as WebSocket and other Web technologies, adoption will continue to accelerate.

One of the key measures of a software technology's popularity is how the developer community for that technology evolves on Stack Overflow, the go-to site for software developer questions and answers. As WebRTC moves from the R&D lab into mainstream, the data from Stack Overflow should support the supposition that real world developers are starting to use this new platform for Web communications. For this article I pulled data from Stack Overflow using its API and Data Explorer. I then ran some analysis to see what could be inferred about WebRTC.

How does Stack Overflow work?
Responses (answers) to Stack Overflow posts (questions) are voted up or down by the community with points and badges awarded to the users with the best contributions. These gamification tactics, in addition to its rigorous moderation practices, have given the site a reputation for high quality content. Its successful search engine optimization has allowed it to rank highly for technical questions. (Ask Google for the difference between WebRTC and WebSockets and note the top several results.) If you need further proof of Stack Overflow's relevance, just head down the hall and ask your friendly neighborhood developer, "What's Stack Overflow?" Odds are they will switch to a tab where they currently have it open.

How Popular is WebRTC?
One of the keys to Stack Overflow's success is that questions are tagged with helpful information such as the technologies being asked about. The most popular tags are for various programming languages, with Java, C#, and JavaScript being the top three most used tags. Altogether, there are over 40,000 tags used on Stack Overflow.

Some Stack Overflow tags are really synonyms for other tags. For example, "node.js" and "nodejs" are two different tags, but have the same meaning. Other tags (including WebRTC) do not have any synonyms. Once the synonyms are harmonized, the total tag count is roughly 38K. I sought to determine how popular WebRTC is amongst this large dataset.

With 1,169 questions tagged "WebRTC," it ranks as the 2,127th most popular tag on the site. This is actually quite good - the 6th percentile overall. Considering that WebRTC is still quite new (first launched in 2011), this ranking is something of a testament to its growing success. Examples of other tags in this range of popularity are Spotify and wampserver. Highly popular technologies include jQuery (ranked 6th) and node.js (ranked 42nd).

What is the Growth Velocity of WebRTC?
I then sought to answer the question, "How fast is WebRTC growing?" In order to measure this, I took historical samples of the number of questions posted each month for various Web technologies and compared these to WebRTC. This would help to quantify developer adoption over time.

I first looked at WebGL, a Web technology that is relatively long in the tooth compared to WebRTC. I found that the first post on Stack Overflow referencing WebGL was in late 2009. Since then developers on Stack Overflow have asked and answered hundreds of questions. However, you can see that the growth velocity for WebGL started to wane in 2013 and has continued that trend in 2014. 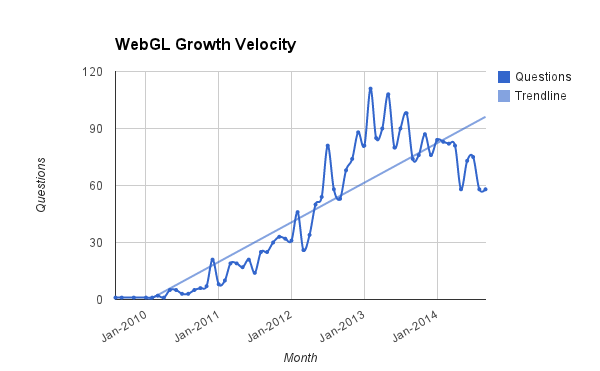 Another Web technology that started becoming popular around the same time as WebGL is WebSocket. Contrary to the recent decline that has been seen with WebGL, you can see from the graph that WebSocket continues to have a strong upward trend, with year-over-year growth of 62%. 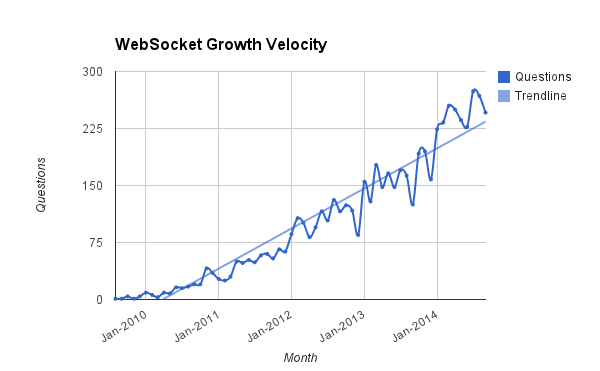 With these two established technologies in mind, I then set my sights on WebRTC. As you can see from the WebRTC Growth Velocity curve below, the Stack Overflow track record for WebRTC is almost two years less than that of WebGL or WebSocket. However, comparing the number of questions being asked on a monthly basis for WebRTC after 2.5 years, we can see that it's in line with the number of questions asked about those other two technologies at their 2.5 years mark. You can also see that although WebRTC oscillates somewhat month-to-month, it has a really nice year-over-year growth rate of 104%. 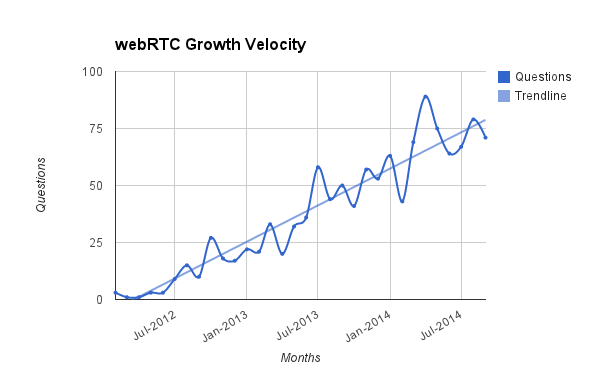 Conclusions
WebRTC is among one of the most popular tags on Stack Overflow. Ranked 2,127th out of 40K tags puts it in the top 6%. Although not as popular as technologies in the top 1,000, such as ember.js (264), twitter (247), and sublimetext2 (967), WebRTC still holds a strong position, suggesting solid placement within the collective developer consciousness.

The number of questions posted on Stack Overflow tagged with WebRTC is trending with very strong growth. I personally believe Web communications will win, irrespective of the particular technologies used to get there. Based on the data here, we can see quantified evidence that WebRTC is making an impact.

The data from Stack Overflow seems to indicate that WebRTC is steadily making its way out of the lab and into the trenches. The growth follows similar trends seen for other Web technologies that have surfaced in recent years. If WebRTC follows the same curve as WebSocket and other Web technologies, adoption will continue to accelerate, especially as abstract wrappers and back-end services become more widely available. The wave is building. I can't wait to see what happens at the crest.