Despite a great deal of hype over the last two years, WebRTC has yet to move into the mainstream - however, don’t count it out yet…

Despite a great deal of hype over the last two years, WebRTC has yet to move into the mainstream - however, don’t count it out yet…

For the last two years no collaboration technology has received more hype than WebRTC. Billed as the technology that would reshape the telecommunications industry, extend video conferencing to the masses, and enable unified communications services everywhere in every application and on every device, thus far WebRTC hasn't quite lived up to its promise. Slowed by standards battles around video codecs, the lack of browser support from Apple and Microsoft, and the lack of real-world solutions from leading UC vendors, WebRTC has thus far failed to cross the chasm from hype to reality.

In early 2014 Nemertes Research interviewed approximately 200 IT leaders responsible for unified communications strategy, architecture, and operations in end-user companies (not vendors or service providers.) As part of these interviews we asked them their plans for WebRTC adoption. As shown in Figure 1, fewer than 7% had definitive plans to deploy it over the next two years while the vast majority had either no plans, or were still in the evaluation phase. 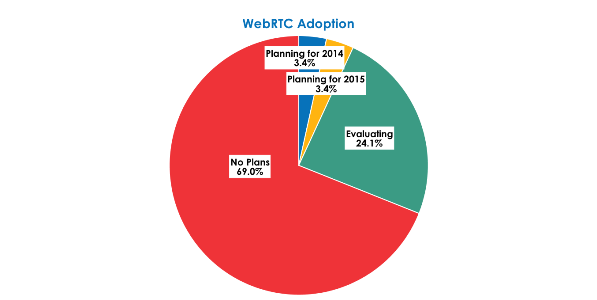 One of the early, and most hyped use cases for WebRTC is for customer facing applications. Inspired by Amazon's Mayday button that enables instant video chat through an Amazon device with a customer support agent, companies like CafeX have brought to market solutions that enable customer service organizations with the ability to add a similar functionality to their own web sites and mobile applications. However when we asked those responsible for contact centers about their interest in WebRTC, we heard a similar story – just 14% were evaluating WebRTC for future use, nearly 86% had no WebRTC plans whatsoever.

Digging into the reasons for their answers we heard a similar theme – "it's not ready." IT leaders cite the lack of real-world products from leading UC vendors, the lack of standards, and perhaps most importantly, the lack of end-user demand and business cases for solutions. Given the current high-priority challenges that UC architects are facing to reduce costs, upgrade legacy platforms, simplify the end-user experience, integrate disparate systems, and evaluate cloud solutions, WebRTC just doesn't rise up to the level of requiring immediate attention from often resource-starved organizations.

Nearly 62% tell us that they haven't even thought about WebRTC yet. Despite broad coverage in the tech media and at trade shows, they are either unaware of the technology, or just don't see investigating it as worth their time just yet. Until such time as major UC and contact center vendors begin to push WebRTC-based solutions of their own, these numbers aren't likely to shift very much. Instead, the WebRTC market looks very much like the innovators dilemma as described by Clayton Christensen – established companies don't see the value proposition in replacing their existing software and hardware with a browser-based client, while small disrupters are trying to carve out new markets for the technology in areas such as group video chat and customer service. What continues to inhibit success is the lack of cross-browser standards and demonstrable business cases.

So is "WebRTC for Losers?" as my NoJitter colleague Dave Michels argued in his post on this site earlier this year? Not quite yet. Leading UC and contact center vendors have publicly stated plans to bring expanded WebRTC-based capabilities to market. The desire of end-user organizations to improve customer service, simplify remote and guest access to UC applications, and broaden availability of UC features into existing business applications still provides impetus for continued vendor investment in WebRTC solutions. Still, WebRTC hype must be tempered by the fact that the lack of ubiquitous browser support for voice, video, and data sharing will continue to limit WebRTC usability going forward. At some point the vendors who stand to benefit from WebRTC (and the customers) must convince Apple, Google, Microsoft and Mozilla to agree on interoperable approach for supporting WebRTC within their browsers.