Everybody loves when things fall into place effortlessly, almost as if by magic. The result can be downright euphoric when this happens during frenzied, stress-filled workdays in which to-do lists stretch well beyond what any human could reasonably cram into an eight-hour period.

I'll turn back to my familiar meeting analogy (read "It's About the Meeting, Not the Product" and "How Cool Do Meetings Really Need to Be?") as a case in point. Who among us doesn't still give a sigh of relief when dialing into an audio conferencing bridge, sharing a file during a Web conference, or initiating a multi-person video call just... works?

Along with a variety of other virtues, such simplicity has long been touted as one of the benefits of WebRTC, a critical enabler of the click-to-communicate movement. The Enterprise Connect/No Jitter content team had a little fun with WebRTC during a recent call with video conferencing provider Highfive, which has just introduced a browser-based option to its video lineup.

Of course, being from a video conferencing vendor, the Highfive meeting invite led with a video link. And, of course, being the "no-nonsense, stick with what we know is going to work and not require us to jump through any unknown hoops" folks that we are, we ignored the video link and instead defaulted to the audio conferencing option. (In all fairness to ourselves, the audio option did seem to make the most sense for us since we were sitting together in one room sans a Highfive room system. We could have each launched our own video call -- but that seemed silly -- or huddled around one of our laptops, but that would have been awkward and uncomfortable.)

But as our conversation unfolded, and we listened to Highfive CEO Shan Sinha extol the virtues of the browser experience, our fearless leader Eric Krapf couldn't resist the temptation to click on the video link in the invite. Of course that sent things a bit haywire with the audio echoing from his PC and the bridge, but we fixed that soon enough by clicking on the video link ourselves and ending the audio call, then muting ourselves in the video dashboard. 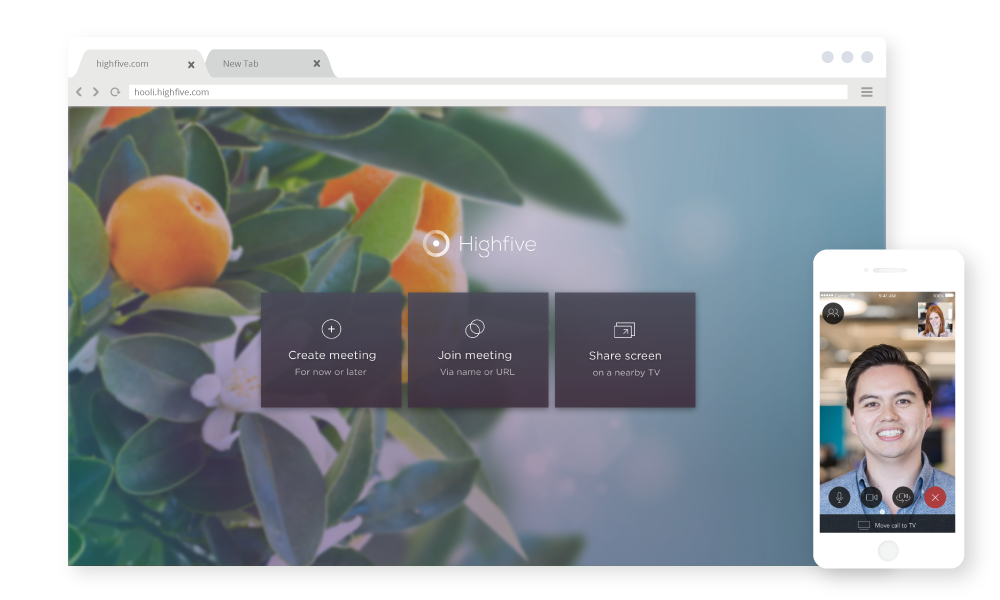 Overall, the experience was one of those seamless ones vendors love to talk about these days (did I mention we entered the call with a simple click -- no download, no PIN, no passcode required). And Sinha demonstrated yet again how easy this all can be when, with a simple click, he moved the call from the TV displaying a full-room view to his personal PC for a view of him as an individual participant. If not a lightbulb moment, the experience was definitely a reinforcement of how simple WebRTC can make things.

In Highfive's case, the video conferencing technology operates on a WebRTC stack, which is what allows for the seamlessness between the in-room meeting room hardware and the "Join by Browser" version we experienced -- that version, by the way is available today for Google Chrome. A Safari version will follow in a few weeks, once the browser's WebRTC support capability is out of beta; versions for the Microsoft Edge and Mozilla Firefox browsers will be coming within the next couple of months, Sinha said.

At the end of the day, WebRTC technology is a building block for other applications, Sinha said. As such, IT can stop thinking about the architecture -- the codecs, the multipoint control units, and the SIP interfaces -- needed to support audio, video, and Web conferencing and just say, "I need an app," he added. "And this app will allow an entire company to connect with each other with a single platform, whether users are joining via Web, video, or voice."

So, yes, Sinha said he sees a future in which:

Sinha isn't alone in his belief that now is WebRTC's time to shine. We've heard the same from others, too. In a recent No Jitter post, for example, Tsahi Levent-Levi, an independent analyst and consultant, wrote that "no one can say that WebRTC isn't here to stay anymore," and Lantre Barr, founder and CEO of WebRTC consultancy Blacc Spot Media, told us during a recent No Jitter On Air podcast that based on the activity and interest he's seen, any enterprise that waits too much longer to implement WebRTC is going to put itself "behind the curve" on real-time communications.

Don't be that company!