When one typically thinks of WebRTC browser-to-browser services, both sides of the call are subject to the vagaries of the prevailing Internet service. Until now.

First, which one is Voxbone? I'm going to admit to a more-than-occasional confusion among the many "Vox" firms: Voxify, Voxtron, Voxeo, even LiveVox. Until 2012, Voxbone was a wholesale provider of carrier services, offering virtual local phone numbers that enabled cloud communications providers, international carriers and conferencing providers to extend the reach of their voice networks internationally. If you are a Skype user, and are familiar with their premium "Skype number" service, Voxbone is behind the provisioning of those local numbers. Local numbers are offered in 52 countries.

Another interesting attribute of Voxbone's offer is that unlike most carrier services, they don't charge by the minute. Instead, they charge for two things: a monthly cost for the use of a telephone number and a cost for reserved call capacity on the network. The call capacity can be shared among countries as well as types of service, including mobile and toll free.

Two years ago, 97% of Voxbone's business came from service providers. In 2012, the company began offering their services directly to enterprise customers, many of them contact centers. Today, 20% of the company's revenue comes from direct sales to enterprises.

The local number service allows a company with a contact center in one country (let's say Sweden) to offer its out-of-country users (say, in Belgium) an in-country number to call for service. Another class of Voxbone user is cloud-based unified communications and contact center providers, and the company's customers include including cloud providers 8x8, inContact, and LiveOps.

Last week, Voxbone announced the availability of a WebRTC service, "allowing enterprises and communications providers to use Voxbone's global private VoIP network for WebRTC calling." Seeking to understand what exactly that meant, I spoke with Dries Plasman, Voxbone's VP Marketing and Product Management. He walked me through the diagram below, which shows the existing solution as well as how Voxbone WebRTC works. 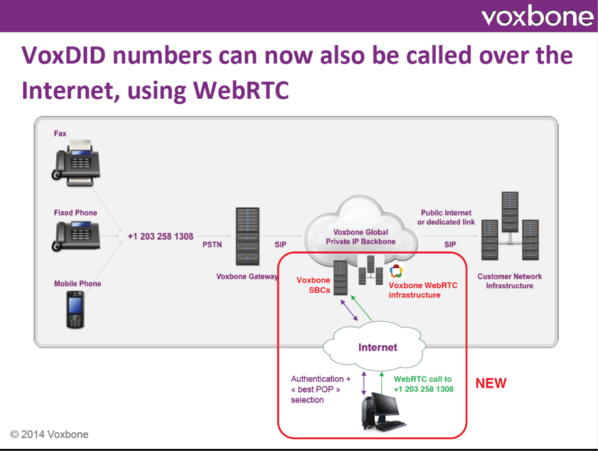 When one typically thinks of WebRTC browser-to-browser services, both sides of the call are subject to the vagaries of the prevailing Internet service. Let's take a use case of a customer clicking a link on a company website to talk to an agent. As shown in the red-boxed portion of the diagram, Voxbone WebRTC service changes that in two ways:

• The request from the customer browser is authenticated and then a request made of Voxbone SBCs for best POP (point of presence) routing to the company agent--adding a measure of quality of service to the originating end.

• Voxbone then delivers the call to the company's agent over its private backbone network to the contact center agent using SIP, typically over a dedicated link.

The end result is to improve the end-to-end quality of the voice conversation over WebRTC. It also enables service providers, cloud communications companies and enterprises to offer WebRTC on the client without having to implement it in their network.

As with many new WebRTC solutions, Voxbone is starting with a voice offering but saying that video is a very likely next step. It's interesting to think of how quickly existing Voxbone cloud contact center companies like inContact and LiveOps could be offering video agent services.