In true Vidyo style, their system is dramatically different than those systems currently available from Polycom, Cisco, LifeSize and others. 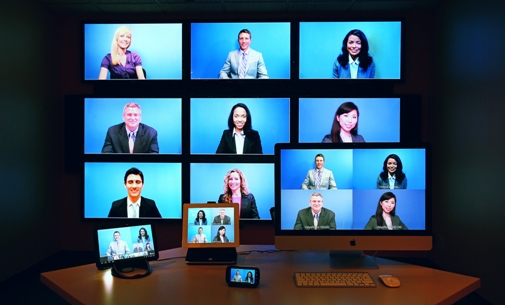 Vidyo, the innovator of H.264 SVC-based video conferencing, announced today they are introducing a multi-screen multi-codec system to compete with high end telepresence suites. But in true Vidyo style, their system is dramatically different than those systems currently available from Polycom, Cisco, LifeSize and others. The Vidyo system is very flexible on screen-count and screen layout, and it provides a dramatically lower implementation cost than the competition.

Vidyo's solution provides from 3 to 20 screens of video in a telepresence solution. Each screen is supported by a loosely coupled standards-based platform that acts as the codec, using Vidyo software to decode the video stream and manage the user viewing experience.

Let's take a look at the architecture of this solution to understand why this is possible, and what it means for the design and deployment of Vidyo-based telepresence solutions.

The Vidyo solution uses a different model for the delivery of multipoint video conferencing than other solutions by taking advantage of the H.264 SVC coding standard and Vidyo technology in their video switcher. In the Vidyo architecture, each endpoint participating in a video call generates a video stream. This stream is sent to the Vidyo switch, which forwards that stream to any participant who is in a common multipoint meeting with the source. Each endpoint in the call then receives a separate stream from the bridge for each other participant in the call.

In a desktop-video environment, this visually shows up as a separate picture of each participant in the call. These pictures can then be oriented on the screen and sized by the user with no effect on how others in the conference see their screens. Users can determine for themselves which users or users' content is of the most interest at the moment and manage their view appropriately.

Vidyo has taken this concept from the single-screen desktop model, and extended to the multi-screen telepresence environment. Each screen in the Vidyo telepresence suite becomes an extension of a single desktop and acts like a single window on the PC. But now each participant can be viewed full size, or as large as the display technology allows. The user still has full control over who appears where. Shared content is displayed on another screen, again at the user's discretion. Multiple data shares can be viewed simultaneously, again appearing on the screen of choice.

An interesting result of this architecture is that the bandwidth requirement at the telepresence endpoint can be very asymmetric. If a telepresence endpoint has six screens and one camera, the transmit bandwidth might be 2 Mbps while the receive bandwidth is 12 Mbps. This means the bandwidth calculations for the network team are more complex. But note that this asymmetry matches the asymmetry typically available in consumer Internet connections like cable and DSL. Not that too many telepresence suites will be running on cable or DSL connections, but it is an interesting match.

Note that a key difference between this solution and the Polycom/Cisco/LifeSize solutions is that there is only one camera in this telepresence suite, watching the whole room. This changes the immersive telepresence experience touted by the other vendors because there is no longer the kind of eye-contact between multiple pairs of participants across the telepresence link. If a user in a 3-screen Vidyo room looks to his left at the screen displaying participants in London, there is no visual cue for the London folks that they are being directly addressed because the camera is probably centered in the room. In fact, it looks like the 3-screen participant is looking away.

The Vidyo team was kind enough to take me behind the curtain to see the equipment rack and briefly explain the architecture. The Vidyo system is implemented with a loosely coupled set of standard-platform PCs connected through the network (Ethernet). The "controller" unit acts as the encoder for the room camera, and controls how streams flow to the other units so that as the user changes his display preferences the right stream goes to the right display box.

The key values of this architecture are that it scales easily to very large numbers of screens, and can be designed in a flexible way. This looks to me like a big advantage for channel partners, as they will be able to easily respond to use-case-specific requests from their customers to design a video solution that matches their needs. This is good for the customers, but likewise good for the channels, as they get to add significant value in translating a "standard" offering into well designed custom solutions that work as needed for their customers.

Will this approach be the new approach to telepresence in the market? Is this approach doomed to fail? Remember that very few of us thought an iPad would be a useful item before getting one. Vidyo has done a great job of making me think about the rules of multi-screen video systems and I suspect that they will have the same impact on many others as well.