Video enhancements on tap from a variety of vendors.

Building off the success it has had with its two-year-old PanaCast 2 panoramic video camera, Altia Systems has partnered with Intel to launch PanaCast Whiteboard. The companies describe PanaCast Whiteboard as computer vision software for displaying whiteboard content as an individual screen tile within a video conference.

Further, PanaCast Whiteboard automatically adjusts image quality and corrects distortion so users receive a clear view of the whiteboard image. The algorithms at the core of this solution run on the Intel Core i-series processor family, the companies said. Via a free app called PanaCast Vision, users are able to adjust the camera's field of view. Ultimately, users see a full 180- degree 4K camera view alongside shared whiteboard content.

Oblong is known for large-scale elaborate immersive collaboration spaces such as was shown in last year's No Jitter feature on Mercy Virtual's telehealth practice. While the company has been known for large installations, it recently unveiled hardware and software aimed at bringing the entry price for a full Mezzanine solution (its flagship immersive visual collaboration solution) to below $50,000.

Mezzanine is now available for rooms of all sizes, and Oblong has rolled out a new naming convention to help businesses identify the right solution for their particular use cases. The Mezzanine 200 series, pictured below, is a dual-screen configuration aimed at small and medium-sized rooms. It enables concurrent viewing of up to 10 shared devices, gestural interaction (pixel slinging), and real-time control for multiple participants. 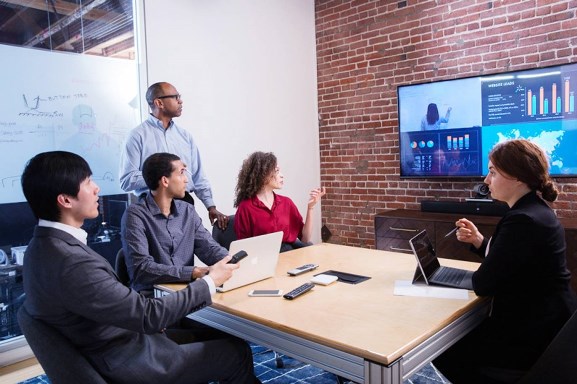 Also new is the Mezzanine 300 series, which is similar to the 200 series but has a three-screen configuration for more content streaming. The Mezzanine 600 and 650 series are for larger rooms, with a six-screen array -- the type of large room setups for which Oblong has become known.

Additionally, Oblong added integrations with enterprise utilities like calendaring and Skype for Business.

Oblong said more details will be available next week at Infocomm.

Panopto, a company focused on creating searchable video libraries, has partnered with video communication provider Blue Jeans Network to automate the process of managing, sharing, and searching inside video conference recordings. The partnership will work by way of an integration between Panopto's video platform and BlueJeans onVideo Meetings and Primetime Events products, based on the Universal Capture Specification open standard, the press release stated.

BlueJeans video recordings will upload automatically to Panopto's video content management system, which will encode the recordings for playback on any device. Panopto also indexes recordings so that viewers can search a spoken word or shared content from within a meeting. Further, full transcriptions of the spoken content are available.

Via the partnership, BlueJeans aims to give users a way to review meeting transcripts and notes, jumping to highlights, on demand and from any device, Krish Ramakrishnan, Blue Jeans CEO, said in a prepared statement.