Toucan: Where the User Controls the Video Experience

A pair of Stanford University siblings thinks outside the box to improve social interactions during virtual meetings. 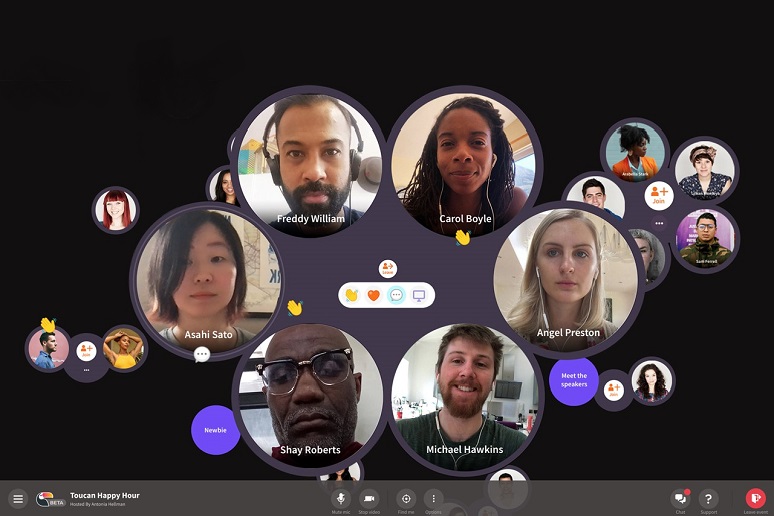 Image: Toucan
Last year, as one awkward virtual meeting led into the next, Stanford University siblings Ethan and Antonia Hellman began thinking about why these calls were going poorly within their communities and social groups. Social psychology, they observed, had become a serious issue, and not only within the educational space but within businesses, too.
Fundamentally, the Hellmans realized that people feel most comfortable within larger social interactions when they’re able to break into smaller conversational groups, Antonia told me in a briefing. This was a missing piece from Zoom and other virtual meeting tools many people and enterprises gravitated to during the pandemic, she added.
“My brother and I sat down at our kitchen table and we said, ‘Why hasn’t anybody fixed this problem?’ I guess we’re the ones that have to do it,” shared Antonia, who is a senior studying political science, economics, management science, and engineering — and a twentysomething co-founder and CEO of a new kind of video meeting provider, Toucan.
As a student, Antonia said she has been spending much of her time in Zoom breakout rooms where she’s had “a lot of time to think about the lessons we can learn from them — mostly on what not to do.” As an example, she pointed out that within a Zoom breakout room, “you don’t have a choice when it comes to who’s there [or] who’s going to be there. You also don’t know how long you’re going to be there,” Hellman said. 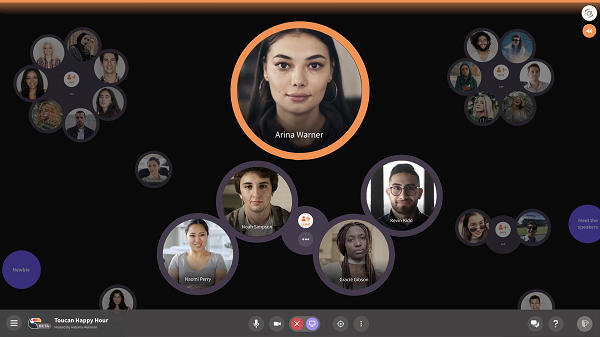 Image: Toucan
Toucan differentiates from Zoom by allowing users to see who's in what group around you, who's talking, and who's actively speaking (see image above). “The fact that you’re siloed [in breakout rooms] makes [the experience] even more uncomfortable—you’d rather have an idea of what’s going on, as opposed to being on your own,” she said.
Toucan’s primary goal during development was “to make people happy, make people feel like they’re together, and like they’re engaging in a social environment,” Hellman said.
With Toucan, when an attendee enters a virtual meeting or event, a bell rings to announce their arrival. The attendee will see individual icons dotted around the screen, and be able to choose which conversation to join by clicking on one. Just like at a live party, the attendee can see who’s moving where to where, and mingle by jumping from one group to another. “We can’t hear them or see them, but we know that they’re there,” Hellman said. The goal was to allow for “fluid, more intimate conversations, but without leaving the broader context of the event space,” Hellman said.
Since launching in 2020, Toucan already has 37,000 unique users on the platform, which supports up to 150 participants with 16 people per group. Almost everybody — 93.3% of meeting attendees — “actually speak,” Hellman said.
As an example, Hellman shared how one organization hosts a weekly event called Multilingual Mondays. It invites speakers to talk about a particular topic, and at the end of the presentation, they break out into groups by language — French, Chinese, Spanish, etc. — for practice speaking in that language only. “It’s a completely immersive experience — and it’s been growing week after week,” Hellman said.
A business might use Toucan to create a company culture, introduce new members of the team, find mentors, and cultivate that mentor relationship.
Toucan is available in a freemium model, with plans to offer a paid license with additional functionality and the ability to customize the virtual space, Hellman said. “We envision a platform that people can build on.”