Raising the Bar in Huddle Rooms 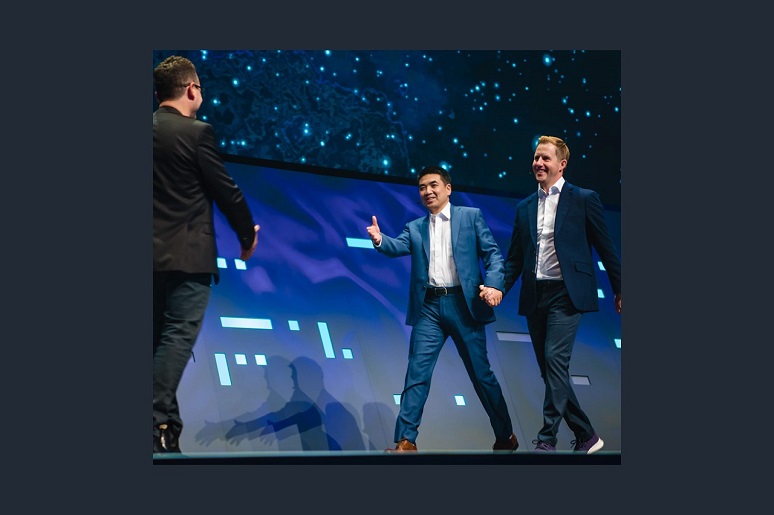 Zoom CEO Eric Yuan and Neat Chairman OJ Winge on stage at Zoomtopia announcing the Zoom-specific Neat video conferencing bar. According to Neat, the hand holding is a Chinese custom to signify that this is a very strong partnership between the two companies.

At the Poly analyst event in San Jose in October, Poly announced its Studio X Series video conferencing bars designed for Zoom. The next day, at Zoomtopia, Neat chairman OJ Winge dramatically announced its video bar solution for Zoom on stage with Zoom founder and CEO Eric Yuan. This product announcement prompted me to take a close look at the overall video bar market and what’s currently available.

Neat’s announcement of a Zoom-specific video bar caused me to reflect on whether Neat could succeed financially, offering a hardware solution only to Zoom’s customers. The implication is that a huddle room equipped with a Neat video bar would only interop with Zoom, but what if you needed to hold video conferences with Cisco Webex, Microsoft Teams, Google, or BlueJeans users? The Neat video bar would be great for Zoom-centric organizations, but for enterprises needing heterogeneous huddle room video capabilities, in which they might use any video service, such a device would be quite limiting.

So, I decided to compare the “video bars” available for sale in the market. I found 15 huddle room video bars, plus a 16th available from Highfive’s video (including hardware) as a service model. While I can’t adequately contrast video quality, sound characteristics, and usability in this article, I will provide a list of these devices, along with some specs, which will hopefully serve as a starting point for enterprises looking to equip their huddle rooms with video bars.
Is Interop Important Anymore?
The first thing I would ask myself when equipping a video-enabled huddle room is what other systems those using the room may need to connect to? With Microsoft’s announcement at Ignite in early November that Microsoft Teams, Zoom, and Cisco Webex are working toward video interoperability via WebRTC, this question loses some of its urgency. Pexip and BlueJeans already support WebRTC, so if this interop between the major video service providers really works as advertised, it will be a great boon for the entire industry.
However, interop will still be important. For example, what do you do if you just want to connect to a legacy SIP or H.323 video device – do you use one of the services and their corresponding gateways (which may cost more in the case of Microsoft and Zoom), or can you connect directly to a legacy endpoint outside of the service?
Here’s what I’ve found for the 15 video bars in terms of interoperability. As you look at the table below, I have listed the services and/or protocols for which they are spec’d today. If the interop column shows Zoom, Microsoft Teams, or Webex, you can remember the future WebRTC interop with other systems that should be coming next year. Also, when the interoperability column says, “App Dependent,” this means that the device depends upon an application running on an external processor in some other system (PC, Mac, Tablet) for the interoperability. 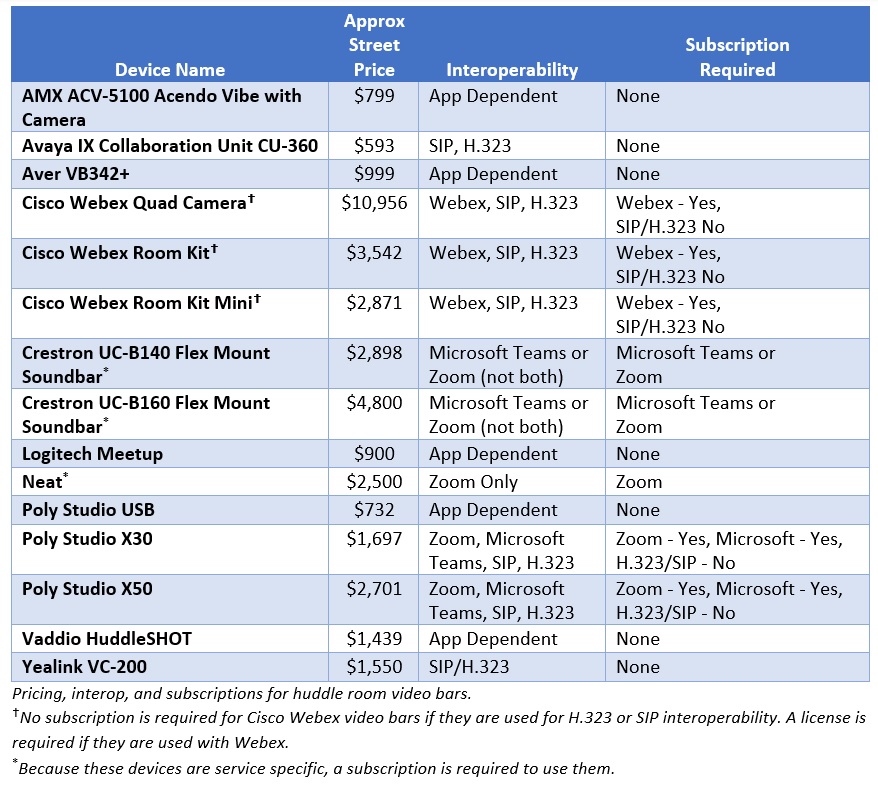 We usually hear that Cisco Webex Room Kit devices require a subscription; however, Cisco has confirmed that these devices do support SIP and H.323, and if they are used exclusively for these protocols, they do not require a subscription. The Crestron and Neat devices are service-specific, and they will require a subscription to use them.
How Big and Heavy is the Video Bar
While maybe not a huge factor in most cases, there are some significant size differences between these video bars. They range in width from 11 inches to nearly 4 feet and from one pound to 15 pounds in weight. I did have an instance of trying to install one of these video bars in my environment above a small display, and the bar was too big for the space I had. So, it is good to remember width, height, depth, and weight when considering a video bar for your huddle spaces. 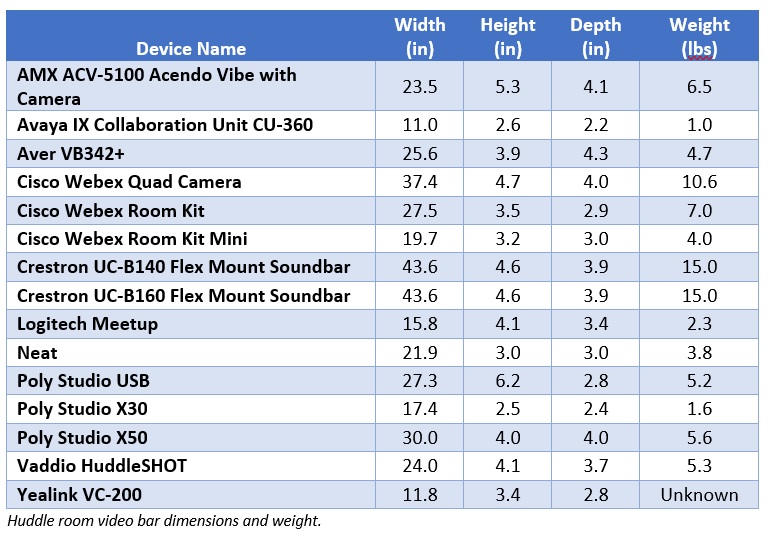 Device Target Room Size, Camera Specs, Mic and Speakers
It is interesting to see how the camera, mic, and speaker specifications for huddle room video bars compare. Most are designed for small conference spaces and most have 4k video cameras. The horizontal field of view is generally pretty good with most over 120 degrees; however, one has only an 83-degree field of view. Field of view is important because it determines how closely participants can sit to the video bar and be seen by the camera.
All of the bars have array mics, and I’ve listed the number of mics in the array if I could find the spec for it. Seven of the 15 devices have video compression/decompression (codec) capabilities built-in, while eight of the devices need to be powered by an external CPU, typically on a PC or Mac. The Crestron devices come with an Intel NUC PC running Microsoft Windows, but the NUC is not built into the bar itself, rather it’s attached within the wall mounting enclosure for the system. 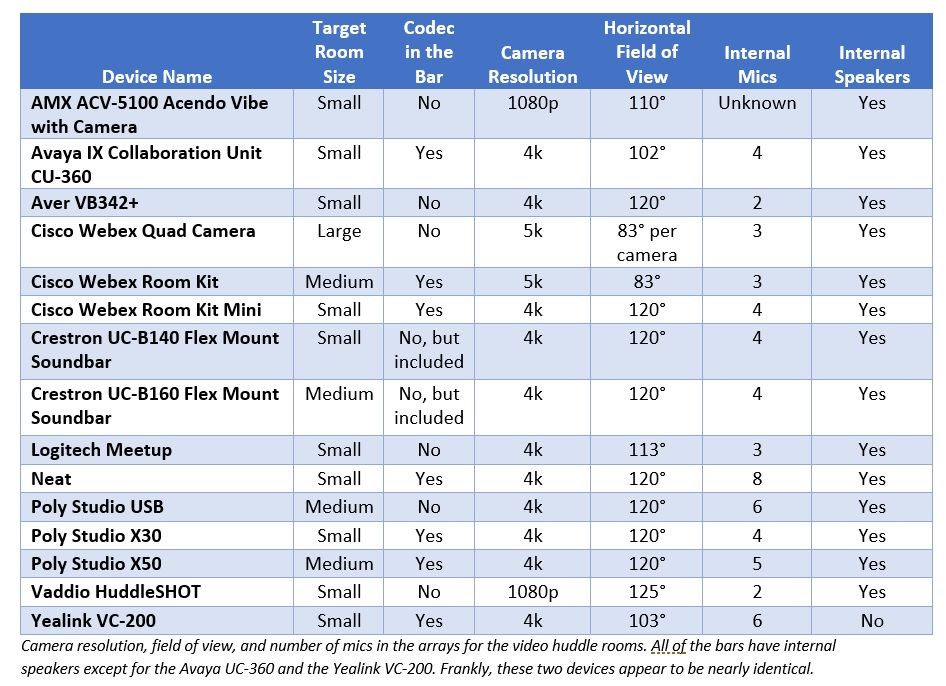 Usability and Management
I’ve lumped several related usability and management capabilities into a single category. This includes things like auto framing, wireless sharing, support for dual screens when sharing content, the availability of a remote control, and whether the device has remote management capability.
There are many subtle differences between these devices. For example, a remote control may be a simple handheld remote, or it may be a deluxe controller like the Cisco Touch 10, Crestron TSW 160, or the Poly TC8. Auto framing will have different switching speeds between devices and grouping characteristics. In the space for this article, I can’t go into much detail on the differences. Just know that there are some big differences in the framing, remote controls, and in remote management capabilities. 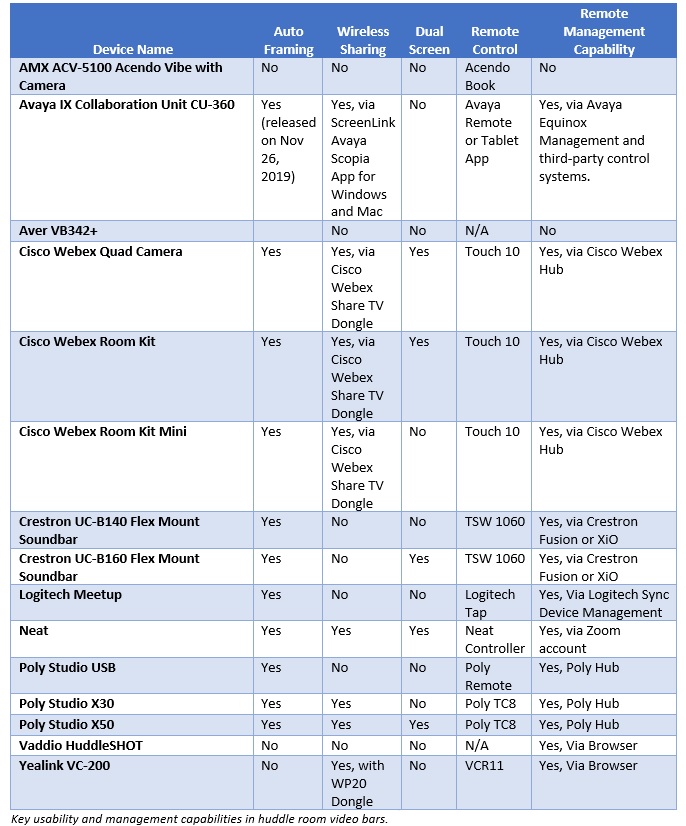 Headroom for Significant Growth in the Video Bar Market
At Enterprise Connect 2019, one of the video-centric panels estimated that there are about 25 million huddle rooms globally, and most of these aren’t video-enabled. Research and Markets also estimates that there are 32.4 million huddle rooms, and less than 2% are video enabled.
No one knows the exact number of huddle rooms out there, but suffice it to say, there are a lot. The bottom line is that most of us in the communications and collaboration industry will encounter a video bar in one of our favorite huddle rooms soon. There are pros and cons between the all-in-one self-contained video bars and other huddle room video solutions. Most of these video bars claim to be easy to set up and manage, eliminating a lot of cabling in the room and reducing the hassle for the people that install, maintain, and update them.
Personally, I’ve had access to an all-in-one executive HD SIP/H.323 video conferencing device for several years, and frankly, it is a pleasure to use. It just works and has no cables traipsing through the office, other than the power and network cords. Plus, the sound from the internal speakers is excellent.
The PC-based desktop video systems are much better now than they used to be. Nevertheless, there can still be issues with PC video apps. Two weeks ago, I was trying to connect to a WebRTC browser-based video meeting. I also had two other UC clients running at the time. Unfortunately, one of the UC clients had grabbed the camera and wouldn’t release it, so the video call failed. In another instance, one of my UC clients says that controls for my Poly headset (mute, hang up, etc.) are not available unless I close the other UC app. Sometimes browser-based video apps relying on USB peripherals don’t always have the right controls to choose which camera or which speaker (external or headset) to use. The self-contained video bars would have none of these issues.
There is a lot of headroom for growth in the huddle room category for video bars. When true interop becomes the norm between these devices and a variety of cloud-based video conferencing services, it will almost be a no brainer that they should be deployed.