Poly fills a portfolio gap with eye on remote workers. 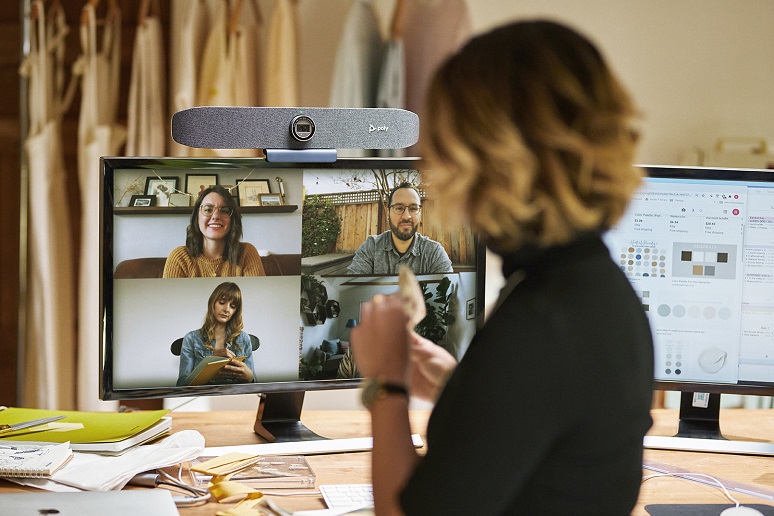 It has been about two years since Poly introduced itself at Enterprise Connect as the newly branded company formed by the merger of Plantronics with Polycom. Since then, Poly has released a slew of headphones, video bars, phones, and other devices. Today, Poly is expanding its product portfolio in a new area, with personal video devices designed for the remote worker in mind.
While known for group voice and video and personal voice devices, Poly had a gap in its portfolio when it came to personal video devices, Chris Thorson, senior director of global solutions marketing for Poly, acknowledged during a No Jitter briefing. And with many workers likely working remotely, either hybrid or fully, moving forward, Poly took the opportunity to break into the personal video space with the Poly Studio P Series, Thorson said.
The P Series portfolio of USB devices comprises the:
In addition to these devices, Poly will be offering the P5 webcam in three bundles. The basic bundle includes the Studio P5 with the BW 3210/3325 wired UC headset; the next bundle up includes the Studio P5 with the Voyager 4220 wireless headset; and lastly, the final bundle packages the Studio P5 with Poly’s Sync 20 wireless speakerphone. The kits will range in price from $149 to $239 and will be available starting in March.
P Series devices are manageable through Poly’s cloud-based desktop app, Poly Lens, Thorson said. As such, IT managers will be able to push out software updates, perform inventory checks, and monitor bandwidth. Additionally, users will be able to access Lens to adjust their own device settings. For instance, they’ll be able to toggle acoustic fencing and auto-framing on and off, select background soundscapes, and set health and wellness reminders, such as “time for a break” or “drink some water,” Thorson said.
For enhanced device support, Poly also introduced the Poly+ plan, which provides an extended three-year product warranty, advanced IT troubleshooting tools, and 24/7 tech support.