Unify's Circuit: Looking Toward a Single Pane of Glass

In one of the most widely anticipated introductions the UC market has seen in a good long while, Unify today launched the product it's been calling Project Ansible for the last year and a half but now officially goes by the name Circuit.

Circuit, nee Project Ansible, has changed a bit in the year and a half since Unify (formerly Siemens Enterprise Communications) announced the initiative. Project Ansible, when first introduced, promised to be a communications hub that presented a single pane of glass into the increasingly inconvenient mess of messaging, communications, and social tools that people use at work. Yet Circuit, as it now exists, is more of a closed enterprise social community with comparably robust real-time communications baked directly into it. This could very well be compelling to businesses seeking enterprise social software, particularly those interested in adopting it in a SaaS model and those that have not already made significant investments in IBM Connections, Jive, and other enterprise social platforms.

But I think that Circuit will become more interesting to enterprises after its next few enhancements, which should allow it to fulfill the "single pane of glass" promise that people -- or at least I -- find so interesting. So let's take a look at what Circuit offers today, and how it's expected to be enhanced in the near future.

OK, now on to what Circuit is and what it will become. 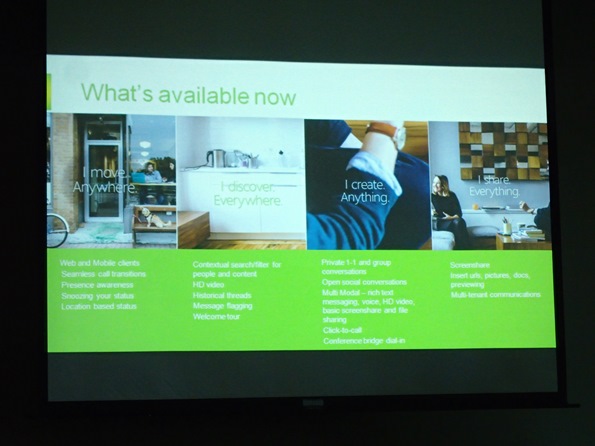 What Circuit does. Photo of a slide shown analysts at last week’s Unify conference.

Client software
Now: For PCs and Macs, Circuit runs as a browser-based WebRTC client in Chrome. Screen sharing requires a plugin. For mobiles, Circuit comes in the form of a native iOS app for iPhones and iPods.

Later: Unify plans additional browser support, including a native WebRTC client for Firefox and a plugin for Internet Explorer. For mobiles, Unify is working on a native app for Android. It has no current plans for a native BlackBerry app, though the Android app may be able to run on BlackBerrys, as many others do, and Unify has said it's considering an IE and BlackBerry client.

My thoughts: Circuit is a brilliant use of WebRTC. It's great to see a leading UC solutions developer embracing it in this way, and I think this is a sign of things to come as other UC vendors roll out browser-based clients for their communications solutions.

That said, having only a browser-based interface means that when the client is not connected to the Internet the user has no access to Circuit content -- at least that's what happened with my demo account. So that meant no checking of conversation threads on airplanes or other places where I was unconnected. 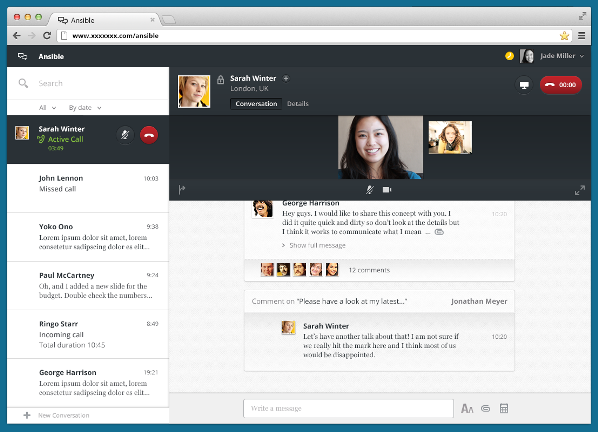 The Circuit user interface... pre-launch, clearly, since it’s still called Ansible. On the left, a list of Conversations. On the right, the Conversation you’re currently viewing. Top, middle: Point-to-point video call in progress. User can increase or decrease size of video windows.

Search
Now: Users can search content and contacts within Circuit.

Later: Users will be able to search content and contacts outside of Circuit. This will require connectors and integration with third-party software (more on that below). 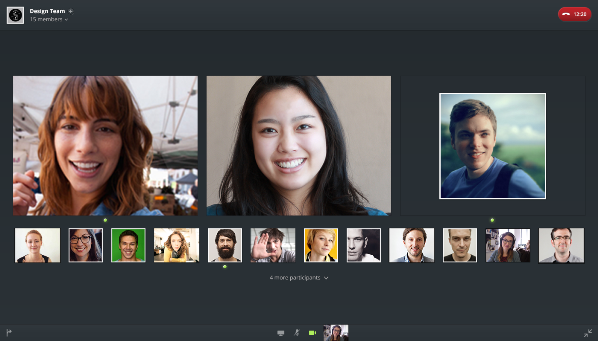 Later: Ability to dial out to the PSTN via PBX integration and/or support for carriers' SIP trunking services (more on that shortly).

Additional info: Calls between two Circuit users are set up peer-to-peer while multipoint calls leverage OpenScape Media Server in the Circuit cloud. Technically, there's no maximum number of participants who can be in a multipoint call. Circuit interface displays at most 15 participants in video calls, with the top one to three of them appearing larger than the others.

Telephony integration
Now: Circuit does not currently integrate with any PBX system, UC server, or telephony service. With the exception of PSTN dial-in mentioned above, users can set up voice calls only with other Circuit users.

Additional info: Both telephony connectors are powered by... yep, you guessed it: OpenScape Media Server in the Circuit cloud. Circuit is getting a lot of mileage out of that thing!

My thoughts: The advanced telephony connector will only work with Unify voice systems. So telephony presence and other advanced voice services will only work when Circuit is deployed alongside OpenScape. This is great for OpenScape customers, but it will limit the degree to which companies with Avaya, Cisco, and other telephony systems are able to integrate Circuit into their overall communications and collaboration environment.

Audio conferencing
Now: Audio conference participants can dial in to a Circuit meeting from the PSTN. This is powered by conference bridge software in the OpenScape Media Server hosted in the Circuit cloud. Dial-in numbers for the US, UK, and Germany are currently available.

Guest access
Now: None, except for aforementioned PSTN dial-in for audio-only participants.

Additional info: Cross-tenant communications was described to me as a "hidden feature" in the current version of Circuit. Users can enter the Circuit ID of users at other companies, but the Circuit UI doesn't explicitly indicate that this is possible. In later versions of Circuit, this feature will become more obvious.

Next page: Click to the next page to find out how Circuit handles video and IM integration, and more

Video integration
Now: For now, Circuit does not integrate with third-party video conferencing solutions, whether room-based systems from Polycom, cloud-based services like Fuze, or video-capable UC apps like Lync.

Later: Support for third-party video conferencing systems isn't on the Circuit roadmap. At least not that I've heard.

IM integration
Now: Circuit has no inherent IM capabilities, nor will it have them later. This is in keeping with Unify's "this ain't UC" stance on Circuit. There is no integration with third-party IM systems.

Later: Unify does not have support for third-party IM software on the Circuit roadmap. At least not that I've heard.

My thoughts: The lack of a buddy list is the first thing that threw me off when using Circuit. I think this is partly because I was still thinking of it as a UC app with some social stuff thrown in and partly because I wanted to see who else was online so I could fire up a video call with them. But Unify is shooting for something different with Circuit. It's not trying to recreate a UC experience, but rather to change how people -- at least people whose jobs require a significant amount of time in front of a PC or mobile display -- work. It's a gutsy move for a company that's otherwise so communications-oriented... and one that will put Unify on a collision course with a whole new set of competitors including IBM, Jive, Microsoft, Glip, and Slack.

Presence
Now: Circuit users can view each other's presence and manually set their own presence state. Presence state changes when a user is in a voice or video call on Circuit.

Meeting recording
Now: Circuit does not have any recording capabilities yet.

Later: Circuit users will be able to record live meetings, including their audio, video, and screen sharing components. Audio will be automatically transcribed, so searches for keywords will turn up hits in the transcriptions.

Integration with other apps
Now: None

Later: Unify has immediate plans to deliver an Outlook Contacts connector and not-immediate-but-not-far-off plans for a connector for Outlook Calendar. There will be few (no?) one-off integrations with other apps. Instead, Unify wants to deliver a middleware layer that exposes Circuit APIs and SDKs to developers. That -- and presumably an ecosystem of developers -- should lead to integrations with other apps like Salesforce.com, Twitter, LinkedIn, Yammer, Jive, and so forth.

My thoughts: Integrating with third-party apps will be absolutely critical to Circuit's success, in my honest opinion. Certainly it will make Unify's "single pane of glass" promise more of a reality. Circuit is certainly interesting as it is. But until it lets users connect to the wider world of business apps it's yet another silo. I don't know about you, but I neither need nor want yet another repository of messages that I need to check along with all the other message repositories I have to manage. But an app that helps bring them all together? That's what really captured by imagination at the Project Ansible launch last year. And that's what I'm really looking forward to Circuit becoming. 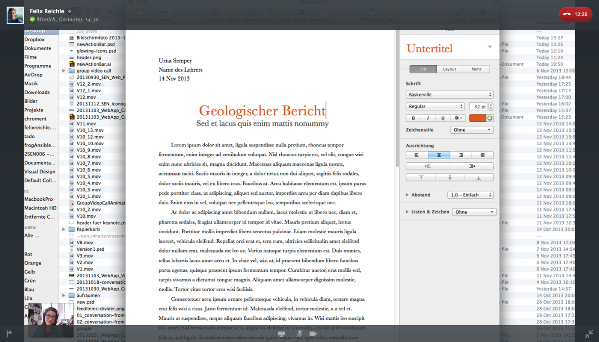 Strangest. German. Ever. But this is a decent shot of what a Circuit video conference + screen sharing session looks like.

Later: Hmmm... I'm not sure, really. I don't remember Unify saying if it was planning to make Circuit's document collaboration capabilities more robust.

Document storage
Now: Documents get stored on Circuit servers in the cloud. Unify offers a maximum of 50 gigabytes of storage per user with the paid service and 5GB per user for the free trial.

Later: Unify will add more per-user storage for an additional fee, and offer support for external storage repositories, either in a corporate network or via services such as Box. 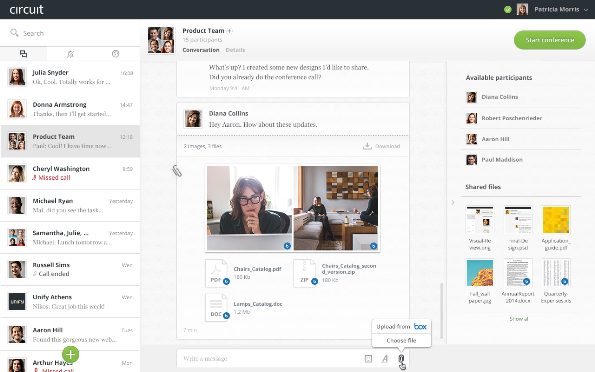 Later: Large service providers will be able to host the software in their own networks and offer it as their own service.

My thoughts: I'm not sure if Unify has really committed to this. Some Unify folks have said there will be partner-hosted Circuit services and I've heard others say that there won't be. Both approaches have their pros and cons. On the one hand, letting Verizon or other providers offer their own Circuit services would give the partners more incentive to promote and sell the service compared to them just reselling the Unify-hosted service. On the other hand, Unify will run into the same problems that Cisco, Microsoft, and others have with different providers offering services based on different versions of the underlying software. So there will potentially be less uniformity across their various Circuit-based services.

Additional info: Premium support for Circuit is an in-app feature. Users click on a button to open a message session with a Unify support rep, as well as upload log files to the Conversation thread. Escalate that to a two-way video conference within Circuit, with screen sharing to help resolve the issue. This is very reminiscent of Amazon Mayday.

Sales model
Now: Unify has a small direct sales force dedicated to Circuit. Customers can sign-up for trials or paid subscriptions via a self-service Web portal.

Later: Unify will have a formal Circuit channel program in place by January 2015. Based on what I heard at the Unify conference last week, a number of resellers have already been looped in and are getting their heads around how Circuit will or won't complement their existing OpenScape business.

My thanks to Jan, who I mentioned earlier, as well as Frank Fender, UC consultant and software architect, and especially Paul Maddison, product owner-Circuit, whose 30-minute one-on-one session with me went on for two hours ... not including a 3.5-mile hike earlier that day, during which he was mercilessly quizzed on Circuit up one side of Camelback Mountain and down the other.

When gear breaks and the game stops, service technicians need modern communications and collaboration tools to get jobs done.

As WebRTC-enabled embedded real-time communications becomes mainstream, it’s critical the technology lives up to the hype.

WebRTC: What Are You Waiting For?

Here’s why you should be using this real-time communications technology to update and improve your contact centers.

Keep your network performing optimally with these three tips, as Martello Technologies discusses in this sponsored post.

While designers of WebRTC are proud of the flexibility that not defining a signaling protocol brings, pragmatic people like me are confused and frustrated.

See All in Real-Time Communications »