Unify Gets Hacking With Circuit

As it prepares to open the Circuit collaboration platform-as-a-service, the company hosts its first developer hackathon -- and gets some cool results.

If you have a development challenge, setting up a hackathon to drum up innovative ideas seems almost a matter of course these days. Taking enterprise communications and collaboration to the next level is no exception.

While I wasn't able to go onsite for this latest hackathon -- it took place in Athens, Greece -- I was able to chat with Stefan Ried, Unify's new CTO, for his takeaways.

Prepping for PaaS
Unify decided to join the hackathon ranks in order to better prepare for the impending day when Circuit, which already is a collaboration app delivered as a software service from the cloud, also becomes a collaboration platform as a service (PaaS), Ried told me just as the hackathon wrapped up last Friday. "As we open up some of the platform functionalities below the Circuit app we can extend the application with some cool, business-specific stuff, or maybe use services out of it in different applications."

As a hackathon newbie, Unify started with an event for its own folks -- and, yes, that does mean Circuit developers themselves but also developers working on other products, like the OpenScape UC software, who had never before seen or touched the Circuit code. "We had a very mixed group, intentionally so. Some were more skilled than others; some were experienced in modern programming, some not," Ried said.

In all, eight teams participated in the event. The teams ranged in size from one to eight people, with a total of about 50 participants, he added.

The Unify event comprised one day of learning and three days of hacking, and Ried said he thinks of it as a "great success." That's to say, "nobody totally failed," and even those who had only the most basic of developer skills were able to participate in the hackathon after the day of learning about the Circuit platform.

The goal, in part, was to help the Circuit team figure out which application program interfaces (APIs), programming models, and data structures to expose to external developers, Ried said. But of course it was also about generating ideas and seeing what sorts of add-ons might result from an opening up of the platform, so the developers had free rein in their hackathon projects, he added.

Unify will talk about the winning projects at Enterprise Connect 2015 in Orlando and actually show them at CeBIT in Hannover, Germany; both events take place the week of March 16. Circuit developers follow agile development practices, with another scrum launched every two weeks, Ried said. "So you could imagine the stuff we learned today could already be in production for all commercial users in two and a half weeks."

Give Me Speech & Better Sight
Unify designated two winners for its first hackathon.

The first winning team created a speech-enablement app for blind or visually impaired Circuit users -- or even those using Circuit while behind the wheel of a car. It enabled the development environment to read out elements of the user interface. "'Please log in here.' 'You have five new conversations. Press 1 for the conversation titled Hello Beth. Press 2 for the conversation titled Hackathon team meeting,'" he described. "You could use this interface in a demo version today, and wouldn't have to ever look at the screen."

And, because Circuit itself is about social collaboration, the speech-enablement app adds in context to its recitation. Users of the app would know, for example, which message relates to which other messages -- because they'd be told so, Ried added.

The developers on this winning team hail from the OpenScape side of the house, and so "had no clue how the Circuit implementation worked," Ried said. This should encourage external developers as they consider ways to build on Circuit to serve particular target groups, he added.

The second winning team created a solution that provides an alternative representation of data in Circuit. As you can see in the visualization below, for example, this app delivers an interactive circle of all textual content in Circuit rather than a flat list of results. "These are groups, conversations, single posts and comments to posts. Mouse-over shows the subject of the item. Future ideas include also searching recorded and automatically transcripted audio sessions like this," Ried said. 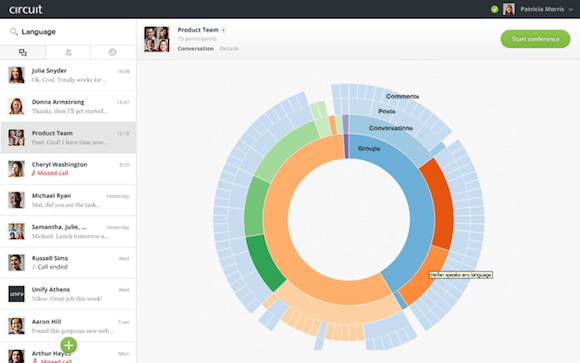 In a second use, the visualization can show the relationships among people, as shown below. "Sometimes, it is really hard to find the right people for certain subjects. This interactive map shows who is on a specific topic or selected conversation, and who is interacting with whom. With this, Circuit can point you to good people frequently interacting on certain keywords or with other people that you know," Ried said. 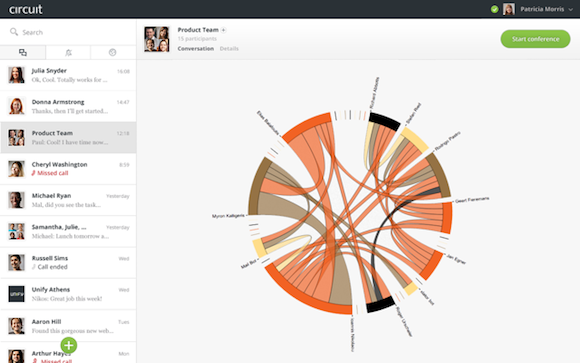 Developers who worked on this hackathon winner do work on Circuit, but on the front end, whereas this data visualization search is a back-end implementation running on cloud servers. So, while the team members were generally familiar with Circuit, they had never touched the back-end code, Ried noted.

Neither of these winning efforts are yet part of the offering shown at yourCircuit.com, but Ried said they will most likely be available as add-ons once Unify opens up the collaborative-PaaS capabilities of Circuit. And, he added, "most likely they will work with the data Circuit customers are creating today."