In last week’s No Jitter post, I wrote that Xorcom, RingCentral, and Vertical Communications rate highest in overall satisfaction based on a new Eastern Management Group global customer survey. But suppose you’re a large enterprise customer? Enterprise expectations are way more complicated than they are for the average SMB or mid-market business.

It takes a lot to be a leader in The Eastern Management Group’s 2018 PBX Customer Satisfaction Study, based on a survey of 3,500 IT managers, when your customer sweet spot is the enterprise. There are a lot of moving parts to be a well-regarded enterprise PBX provider. For example:

Eastern Management Group has consulted on many enterprise procurements. In one case, multiple government PBXs -- amounting to hundreds of thousands of lines -- all were let to bid. RFPs of this size aren’t uncommon. Which companies, then, should be on the short list?

With 40 years of PBX background, we have a pretty good idea of which providers make that list. Our experience is that six providers often pass muster. They are, in alphabetical order: Alcatel-Lucent Enterprise , Avaya, Cisco, Mitel, NEC, Unify. Beyond these six, some Tier-1 carriers also typically make the cut, of course.

We have 10 Customer Satisfaction Measurements in our evaluation, divided into three groups: Product, Vendor Experience, and Customer Delight. 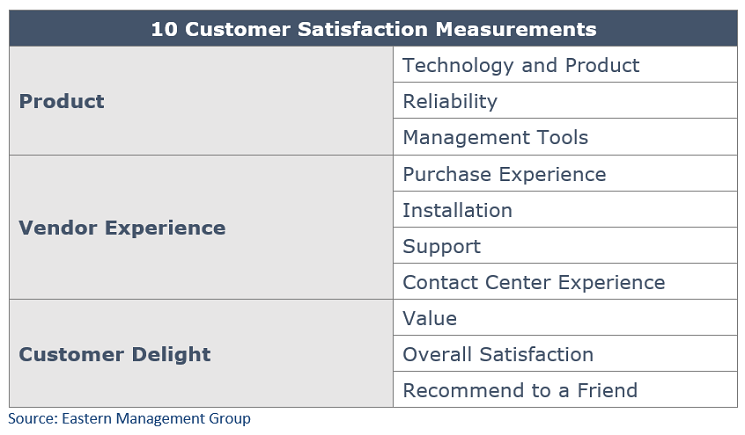 Mitel Is Among the Leaders

How does a company get to such a vaunted position as Mitel has -- to take the Enterprise PBX Customer Satisfaction winner’s spot in six categories, like Support (see table above)? Ability to scale horizontally and vertically is one requirement. While Mitel launched in the 1970s with PBXs and distribution to small customers, its acquisitions of Aastra (2013), which owned the Enterprise division of Ericsson; and ShoreTel (2017), a technology powerhouse run for years by the PBX guru John Combs, forever changed the company’s scalability. Between 2013 and 2017, Mitel became enterprise customer-qualified because Aastra had a worldwide footprint -- required by enterprises -- and big PBXs, as did ShoreTel, whose average customer was twice the size of Mitel’s, according to Eastern Management Group quarterly PBX shipment numbers.

ShoreTel in 2017 contributed additional structure and discipline to a pretty strong Mitel. When Eastern Management Group compared the stand-alone ShoreTel to competitors a few years ago, ShoreTel blew the doors off everyone. In each Customer Satisfaction Measurement, ShoreTel won by 15% to 20%. The competitors in that study were Avaya, Cisco, Mitel, NEC, Panasonic, and Unify.

While Mitel has been the focus of this post on enterprise PBX customer satisfaction, I’ll take a look at two other winners, Cisco and NEC, in subsequent pieces.

More information about the Premises and Hosted PBX Customer Satisfaction Report is available from Eastern Management Group or by contacting [email protected].

Pay Attention to Pricing Models: The Other Disruption in Communications

Usage-based models are coming, and there may be a cost or expense to ignoring it.

A look at the drawbacks with UC analytics tools

The latest news from Observe.ai, Jabra, Pypestream, AVI-SPL, and CoreView.

The Next Big Thing in UCaaS: You!

As managers and supervisors struggle to monitor remote employee productivity and efficiency, UCaaS vendors are responding with built-in and standalone monitoring and productivity products.