Iterating from Voice to Virtual Reality at Weyerhaeuser

A 2021 Enterprise Connect IT Hero Award winner moves from one transition to the next, “consistently and objectively” delivering through setbacks, challenges, and rapid evolution. 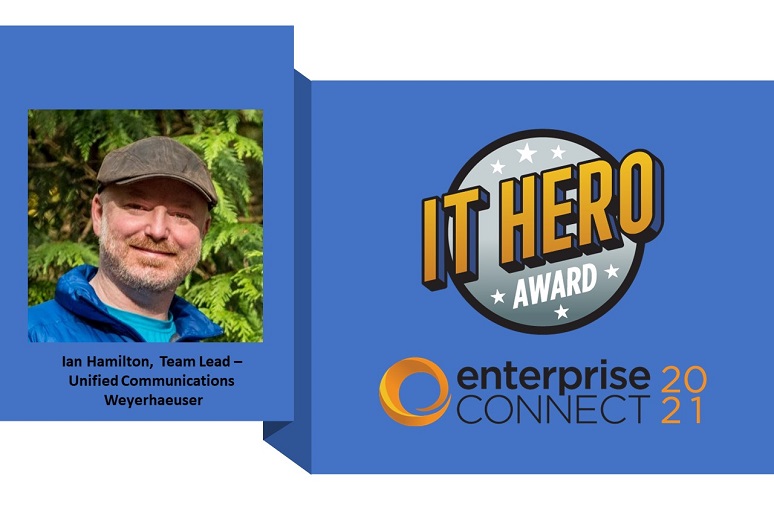 With all the cloud this and cloud that, you might not hear the virtues of on-premises UC much touted as having been a saving grace during last year’s pandemic push from office to remote work, but that doesn’t mean legacy technology didn’t play an essential role at many organizations. One of the winners of the 2021 Enterprise Connect IT Hero Award reminded me of this in a recent conversation, as he recounted how fortunate the company was to have had UC in place as it sent employees home to work.
Because timberland company Weyerhaeuser had previously migrated from a desktop-oriented telephony system to Microsoft Skype for Business, IT found itself “well-situated, at least from a UC perspective, to respond to telework,” Ian Hamilton, UC team lead at the company, shared in a No Jitter interview. As recently announced, Hamilton is one of five IT Hero Award winners, and this is the second in a series of profiles we’re sharing about our recipients. (Read the first profile, on Joe Castillo, with Centre for Neuro Skills, here.)
When the shutdown took effect, IT already had enabled Skype for Business Enterprise Voice for some 4,000 employees, many of whom had UC headsets and were familiar with the softphone and mobile client experience, Hamilton shared. Plus, a lot of people had already been teleworking a day or two a week anyway, so Weyerhaueser was well set up for VPN access. While IT did need to beef up a couple of servers, expand a virtual machine or two, and buy a few more VPN licenses, overall having enterprise telephony as part of its UC platform made all the difference for Weyerhaeuser — a point driven home for Hamilton, he said, as he talked to peers at other companies that found themselves in quite a mess supporting work from home.
Naturally, IT’s move to Skype for Business didn’t happen in a vacuum — and, yes, cloud was a factor. A driver for the decision to go with Microsoft for UC was the ability to then integrate communications within Office 365, Hamilton said. Last year, in fact, IT shifted its voice strategy, pulling the voice workload out of the networking group and instead forming an O365 collaboration and UC team, he added. And, no surprise these days, where there’s Microsoft, there’s Teams, and, as Hamilton said, that’s where Weyerhaeuser knew it was eventually headed for communications and collaboration.
Within only about two weeks of the shutdown, IT was able to shift its focus and dramatically increased its deployment timeline for Teams, Hamilton said. Toward that end, IT began a big adoption push, with lots of training, sharing of tips and tricks, and hosting of virtual office hours, and is now at about 80% adoption of Teams for meetings, he added. As a next phase, underway this first half of the year, IT is upgrading its Skype for Business conference room systems for Teams use. And lastly, it will migrate voice over to Teams, via Direct Routing with Teams Phone System licenses, he said.
“Even though we’ve been doing Teams enthusiastically for about a year now, there’s still so much left we have to figure out and so many opportunities to take advantage of,” said Hamilton, adding that Teams sometimes can be a “little cumbersome and potentially confusing today, but Microsoft will just keep iterating to fix that.” Ultimately, what Hamilton said he expects is that Microsoft will keep adding functionality “to the point where you don’t realize anymore that you’re collaborating because it feels so natural.”
While Hamilton, who comes out of the voice world, said he’s admittedly still figuring out exactly what it means to be an architect for O365, he seems to be handling his own and the company’s myriad transitions with aplomb. In his IT Hero Award nomination, a colleague gave kudos to Hamilton for “consistently and objectively delivering through setbacks, political challenges, and a rapidly evolving landscape,” as well as for being able to manage the migration to Skype for Business and from Skype for Business to Teams while simultaneously delivering metrics-based value and vision.
And of that vision, Hamilton said what he’d “love to see is some [virtual reality] type of experiences for virtual meetings, so it’s not you just staring at your monitor anymore but now you’re actually looking around and interacting with people.”
To hear more of Hamilton’s UC and collaboration vision, attend our IT Hero Award roundtable on Tuesday, March 9, during the Enterprise Connect virtual event, “Communications & Collaboration: 2024” (register for this free event today!).